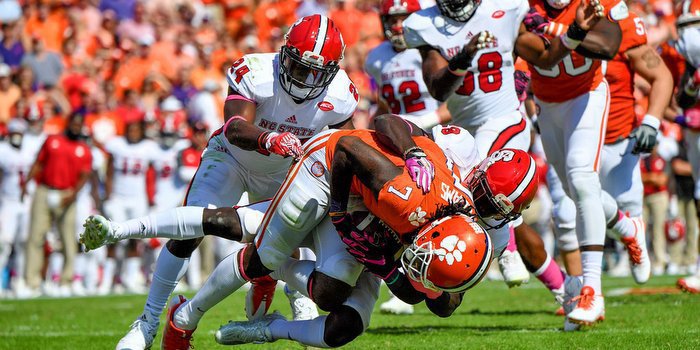 CLEMSON – Co-offensive coordinator Jeff Scott brought two hand-written pages of notes to his open week press conference with the media Tuesday, and he covered a lot of ground.

He started by saying he was proud of the offense in the 24-17 win over North Carolina St. last Saturday.

“I'm proud of the way our guys finished. We never gave up. One of our team commandments of Clemson football is 60 minutes or as long as it takes to finish” Scott said. “I think it was definitely that kind of game on Saturday. When you have the adversity that we had - we moved the football really well and then got down in the redzone and turned the ball over. That can get very frustrating for the guys and I felt like they responded well every time they went back out there. They didn't let that carry over. Watching the video, there was a lot of great things. There were five or six plays that were costly errors but outside of that it was a very clean game. A lot of really good things on video.

“I think we had one three-and-out and then we had one drive where we threw the pick-six on the first play. We only had two punts in the ball game. 91 plays and 495 yards against a very talented defense. There were a lot of positives, but obviously the biggest negatives everybody could pick out - the four turnovers and three inside the redzone. If we don't turn the ball over, it's a completely different game. We don't put ourselves in that situation and I have no doubt we'll get that corrected. It's a good time for our bye week so we can get back to some of our fundamentals and continue to get better.”

Despite the mistakes, Scott said there things to be proud of.

“Some of the bright spots - Deshaun being 39-of-52, 75-percent, for 378 yards. I think our wideouts had 31 catches for 300 yards with 100 yards after the catch. That's a talented group over there (at NC State). You've got to give them credit. They made you earn every yard that you got,” he said. “There was always somebody there and there was never anybody left wide open. Really pleased with the way our guys continued to battle in the face of some adversity. I'm looking forward to the open week with some good practice time this week at the midpoint of the year to get back and lock in on some fundamentals and get better at some things, like we always want to do during the open week. FSU will be a big challenge.

“We haven't won down there since 2006, so that's something that will be talked about and our guys will be looking forward to going down there and playing well. It's probably the most talented defensive front that we've faced this year. DeMarcus Walker is very talented and I personally recruited him since he was in the 10th grade. I knew he was going to be a great player and he ended up at Florida State and is having a great year. That's the thing that stands out about their defense is the play of the defensive linemen. I know they've had some injuries in the back end but really looking at the last two games, they held both Miami and Wake Forest under 300 yards. It looks like they're getting some good continuity back in the back end and playing some of their best ball. It will be a great challenge like it always is down there in Tallahassee and one that we'll be ready for when that time comes.”

Clemson has turned it over nine times in the last two home games – five against Louisville and four against NC State – and Scott detailed his thoughts on what was happening with an offense that has been too free with the football.

“I think the one Saturday where the ball was in a bad position was Mike Williams turnover. Mike thinks the corner missed the tackle and he thinks he's going into score if he can hold himself up,” Scott said. “Really an acrobatic move to stay up on his feet and then the guy came from inside to knock the ball out. That was really the only turnover where the ball was in a bad position. The one on Wayne Gallman, the hit made the ball come out. He had the ball in a really good spot. Tyshon (Dye) just had it pulled out from him. It's like when I was watching the game with Mike yesterday and watching the play and talking about how you have to practice keeping the ball high and tight even when you've got your opposite hand on the ground. After we talked through it, I said, 'You know what we're going to do the next time we're in that same situation? We're going to throw you the ball.' I think Kobe Bryant said one time, 'I'll go 0-for-30 before I'll go 0-for-11.' We have a lot of confidence in our guys.

“Sometimes, unfortunately, the turnovers come in bunches. We had five against Louisville, zero against Boston College and some costly ones this week. It's very similar to drops. You're going to address it, you're going to coach it in practice like we've been doing and find some drills during the open week to help the guys with it, but it's not something we're going to make a huge deal about. I think that's the wrong way to go to really pound these guys about it. They're not trying to turn the ball over. They're trying to make plays. You've got to give them credit, too. All three fumbles, their guy had a big part in those, too - the hit on Gallman and great effort play on Mike Williams fumble and the guy who caused the fumble from Gallman ripped it out from Tyshon. Give them credit, but it's definitely something our guys will get corrected as we get ready for the back end of the season.”

Scott said the coaches don’t want to take away the player’s aggressiveness, but players have to learn when to go to the ground and when to keep fighting.

“With Mike Williams' situation Saturday, he thinks he's about to go score and he's holding himself up and the guy comes out of nowhere,” he said. “That's not a situation where we tell the guys to go down. There are other situations where they have you gang tackled a little bit and you've got two or three guys holding you up to pull the ball out, once you've got as much as you can get you want to go down so that don't pull it out. In Mike's situation, it was just perfect timing - the ball got out away from him at the same time the guy got there to make the tackle. He's got to learn to keep it closer to his body the whole time and don't ever assume that somebody's not there. That's usually when the fumbles happen is guys that you don't see."

“I think Deshaun has some things that he wants to work on but he's thrown some really nice balls, too. Some of you just take for granted some of the strikes that he throws. That comes with territory with a guy as talented as him. He definitely has some that he knows he can make and that he will make.”

The struggles of Ray-Ray McCloud

“I think some of it is fundamental. Those are things he has to continue to work on. The biggest thing is he's not getting behind the ball and getting underneath the ball. He's trying to catch the ball going backwards sometimes. He had one of those situations on Saturday where he thought he was underneath it and the ball blew about two yards further over his head and he got in a bad situation having to turn around and catch it going backwards. He'll be getting a lot more work on that this week. Hopefully, he can do a better job of holding on to the ball because we think he's got good ability to run after the catch if he can find a way to secure the ball.”