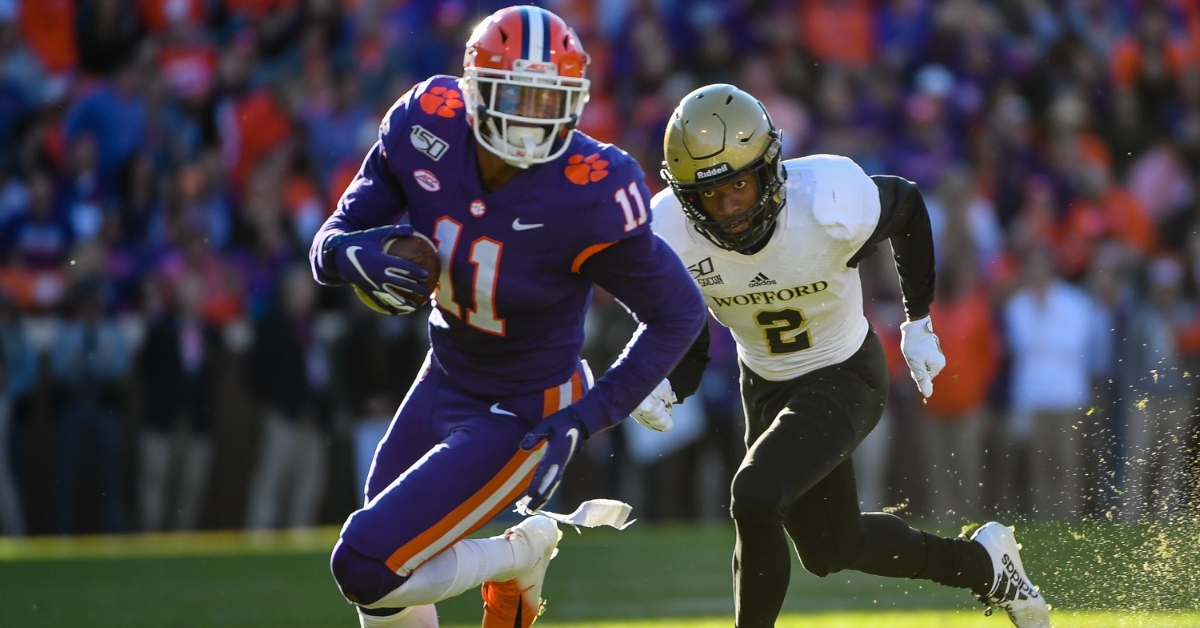 Simmons intercepted his first pass of the season Saturday against Wofford

CLEMSON – There is just one home game left in the 2019 season, and as linebacker Isaiah Simmons made his way through the crowd at Tiger Walk he realized that there might be just one more opportunity to be a part of a Clemson home game as a player.

The junior linebacker out of Olathe, Kansas, nabbed his first interception of the season in Saturday’s 59-14 victory over Wofford. That interception was one of the only things missing from a standout season that sees Simmons lead the Tigers with 65 total tackles and in sacks with six

Simmons has the option to return for a final season in 2020, but is picked as high as the fourth pick in the first in many mock NFL drafts. His freakish blend of size, speed, and athleticism means he probably won’t be wearing a Clemson uniform next season.

"I thought about that today. It was kind of sad,” Simmons said after the game. “Time came by so quickly. I remember being a freshman and now here I am and it possibly can be my last game in the Valley.

"I have just been making sure I am enjoying every moment this year based on whatever happens at the end of the year. It is kind of sad when you think about it."

Simmons returned his interception 19 yards to the Wofford 12-yard line, setting up a Clemson touchdown. It wasn’t an interception he was expecting.

“Not really. Normally that is a deep sail route and I am supposed to give the deep safety line of flight just so it’s a harder throw for a quarterback but he threw it right to me,” Simmons said. “I wasn’t really expecting that but it was nice that I got it.”

“I didn’t even know until Coach Swinney brought it up. I don’t really pay attention to things like that,” Simmons said. “I just look at how we are executing. But I think that is really cool. I think that is cool that we are one of the few teams that have been able to do that.”

Despite the great play of the defense, the records, and Clemson’s 24-game unbeaten streak, Simmons isn’t expecting much when the initial College Football Playoff rankings are announced Tuesday.

“I don’t know (on if the team would get respect). I don’t feel like we’ve gotten it up to this point so I don’t know what would really change for that,” he said. “We are trying to just not give them a choice, make it where they have to put us in.”