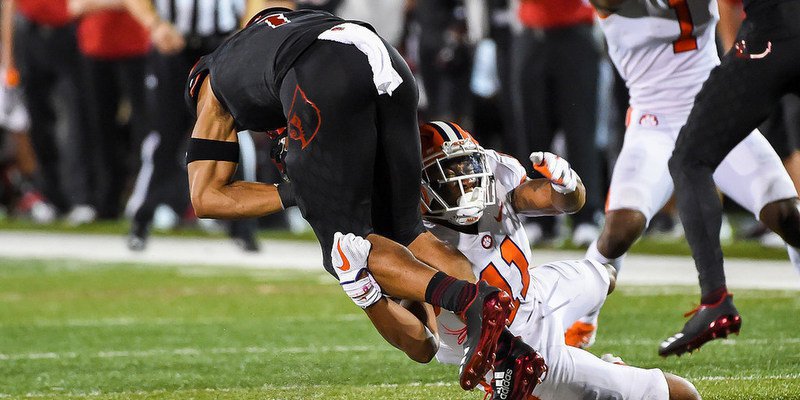 CLEMSON - One common phrase often heard around the Clemson football team from head coach Dabo Swinney is “next man up” and that special phrase became a reality last Saturday night in Louisville when safety Tanner Muse was ejected from the game and Isaiah Simmons' number was called to take his place.

“Just like Coach Swinney always tells us, next man up, and I’ve been waiting for my time and it came," Simmons said earlier this week. "I made sure I was prepared for what was coming for me.”

Simmons made his first big splash by not only getting lots of playing time but getting the opportunity to defend the reigning Heisman winner, Lamar Jackson, who most coaches would rather watch on television than play against because of his very talented, athletic capability.

“I think the biggest issue with playing him is that people try to overplay him and not really go through their reads, keys, and assignments," Simmons said. "Because when you get out of that, that’s how he really beats you.”

Simmons and the rest of defensive coordinator Brent Venables' unit didn’t miss their assignments as they allowed only 21 first downs and 413 total yards that night.

One feature of Simmons' game that makes him so special is his impeccable speed. There have been several occasions where the 6’3”, 225-pound safety has challenged Ray-Ray (Mccloud) to a foot race and come up with a W twice.

“Ray-Ray has been a good friend of mine ever since I got here," Simmons said. "He thinks he’s the best at everything, but he is a real fast, quick guy and I told him we could race whenever. everyone on the team has been doubting my speed, but I came out on top both times. He said he wants a rematch, so I guess we will see.”

Simmons told Tigernet that he gets framed as a guy who plays different positions, other than safety, maybe due to his size. He says people are usually surprised when they find out what his real role is on the field.

“I usually get linebacker, tight end, and receiver a lot, but no one ever guesses safety," he said with a smile.”

What some people may not know about Simmons is that he had different opportunities to play on the offensive side of the ball after high school, but found his love on the other side.

"Coming out of high school, I had some opportunities to play receiver at some schools," Simmons said. "But I have always had the love for playing defense more than offense.”

Being a student-athlete requires a lot of time management and often guidance from peers, and for the young redshirt freshman, he finds it easier this year managing football, classes, and his social life from the advice of older guys like Kelly Bryant and Van Smith.

“Last year it was a little hard for me to manage everything coming out of high school, where it wasn’t that much at all. Football is another class of its own, you have to study it every day, watch film, as well as balance it with your social life and school and taking care of your body," Simmons said. "I looked up to Kelly (Bryant) ever since I got here. Also, Van and I are really close. He is always helping me out with defense, and anything outside of school. I know I can call him for anything.”

Simmons and the Tigers play host to Boston College today at 3:30. This week’s contest gives the Tigers a chance to go 2-0 in ACC play.

Blythe Neal is a TigerNet intern and has helped covered Nike's The Opening, The ACC Kickoff, The Fiesta Bowl and several football games over the last two seasons.