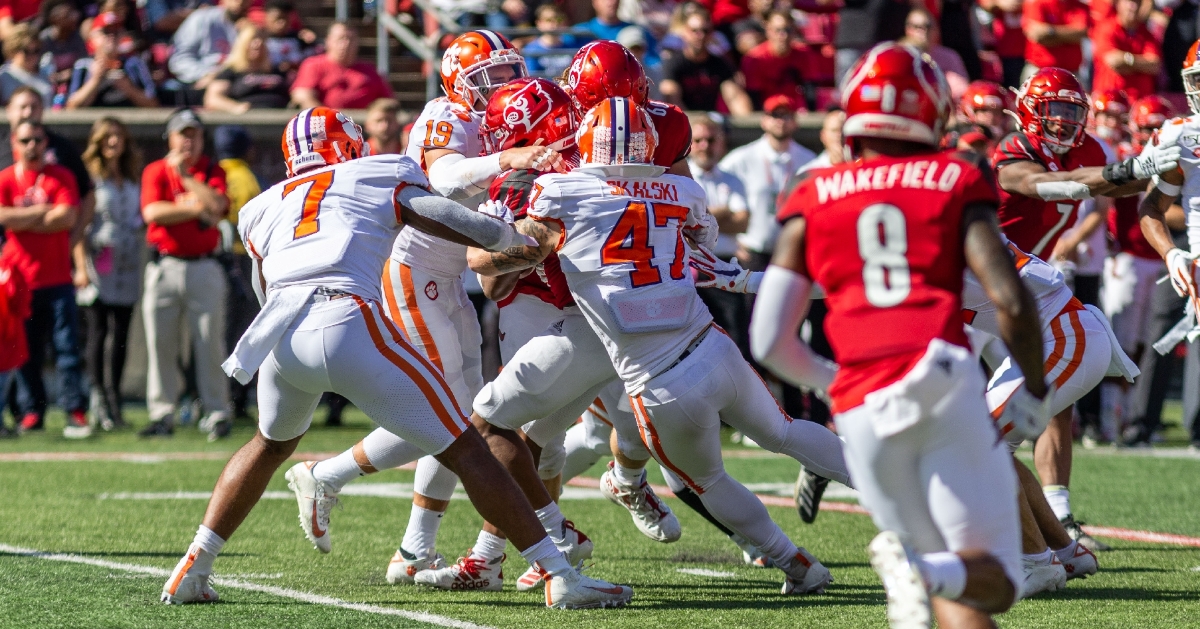 The Clemson defense entered 2019 with what seemed like more question marks than answers. Gone were four starters and two key reserves off the defensive line, two starting linebackers and a starting cornerback. Most pundits predicted it would take the defense the entire season to jell and mature. The thought process was that the offense would be so good the defense would be allowed to have some growing pains.

The only pains so far have been inflicted on opposing offenses.

Louisville entered Saturday ranked 16th nationally in total offense and averaging over 37 points per game. Clemson held the Cardinals to just 263 total yards and Louisville didn’t score a touchdown on the first-team defense.

It’s been that kind of season.

"Defensively, a great effort. Tremendous effort. We held them to 263 yards,” Swinney said. “That's seven in a row where we've held teams to under 300 yards. The first time that has been done here since 1956. The stat of the game was 8-of-22 in passing. We had six sacks on them. We played the stretch well on the backside. Nyles Pinckney probably played his best game.”

Venables loved what he saw out of his defense against Louisville.

"Those guys really answered the bell collectively. Played with passion,” he said. “Very aggressive from the onset. As the game went on, we got better and better and got into a rhythm. I thought our third quarter was as dominant as it was in any point of the game. First couple times out (in the third quarter) we had good rhythm and set the tone for the second half. All three levels were really outstanding today."

Clemson now sits at No. 8 nationally in scoring defense, giving up just 12 points per game (what would it be without all the late touchdowns?). Clemson is 25th in rushing defense, third in passing defense and No. 5 overall in total defense.

Despite all of the losses on the line, Clemson is now fifth nationally in sacks (with 28) and sixth in interceptions with 10. Third down conversions? The Tigers sit at No. 13 (33-for-109).

Head coach Dabo Swinney told TigerNet Sunday that Venables has always been a great coach and uses the strength of the defense.

"I think he has done a great job every year. As far as this team, I know that everybody just looks at the d-linemen that we lost but this is the best back seven we've had,” Swinney said. “He has had a lot to work with. We lost all those guys and that is what people focus on. We're so much better on that back end from a consistency standpoint and knowledge. I think that is where it starts. As far as coaching, he has played to that strength very well. Our whole defensive staff has done just an awesome job.

“And we've recruited well, too. All those guys up front, have stepped up and it's been the next man up for a long time. That's the way it has been at Clemson. Especially on that defensive front, with Tyler Davis coming in here and Nyles (Pinckney) and Jordan (Williams) and Xavier (Thomas) and Justin (Foster) and Logan (Rudolph) - all of those guys are doing a solid job for us. There is still a lot of room for improvement. For us right now it starts with that back seven ... how smart they are, their preparation week in and week out. They love to prepare. Brent has done a really nice job of utilizing our personnel week and playing to our strengths week in and week out."