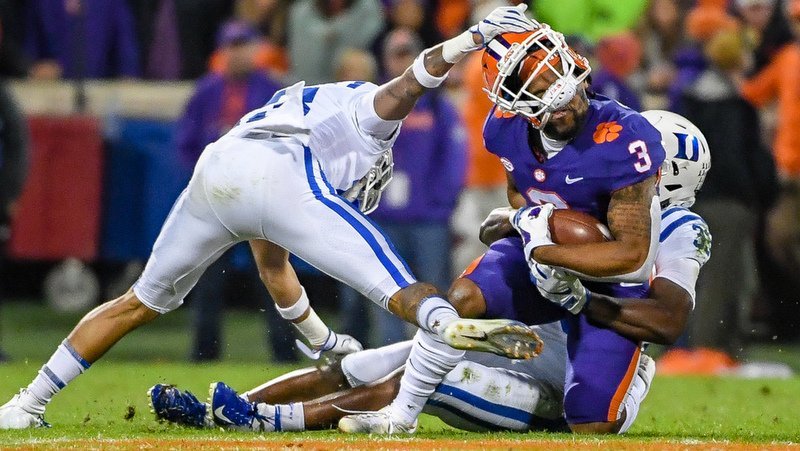 Amari Rodgers gets twisted in the first half Saturday

CLEMSON – Clemson’s offense was stuck in neutral for much of the first half of Saturday’s 35-6 victory over Duke. There were missed throws, dropped passes, and a lack of execution across the board.

“That was a very interesting first half. We got to a third and short, had an RPO called. The quarterback chose to throw, and he’s got every right to throw it there, and we just missed the throw,” Scott said. “We come back on another short yardage, and we don’t convert. We try to get some stuff going in the running game, and obviously, they were dead-set on stopping the inside run, so it’s going to take us a little bit of time, but we needed to get the game under control.

“They were giving us a lot of soft coverage, so we’re going to take the easy throws. Then you saw in the second half...they decided to take those throws away and forced us to run the ball. We challenged our guys at halftime. I think we only had about 17 yards rushing, obviously because of the situation in the first half, and they came out there and responded.”

“The biggest thing in the first half was all of those third-and-long situations. We didn’t have as many opportunities to get in rhythm,” Scott said. “They played some coverage of some different things, so we really needed everyone on the same page. Guys got frustrated that we weren’t getting it done like we needed to in the first half, but everyone was running hard, and we did a better job up front. Getting the first downs in the second half helped us get a better tempo and wear [Duke] down.”

The Tigers scored on the first three possessions of the second half, and Elliott said the message to the team at halftime was simple.

“Settle in and be who we are and respond. You have an opportunity to respond,” Elliott said. “You got the second half. It’s zero-zero. The biggest thing for us, offensively, was to challenge them and make sure we could establish the running game, and we were able to do that the first drive coming out and spark the second half for us. The biggest thing was to challenge them to have the heart of a champion. We say we’re a championship-caliber team. We have to respond that way in the second half.”

Scott said the coaches challenged the players at the half.

“We challenged our guys at halftime. We’ve had a lot of games where we have the upper hand going into the half, but that’s not going to be the case as the competition continues to get better,” Scott said. “We just told them ‘Hey, let’s find out what we’re made of today.’ There’s no reason to be worried about what we didn’t do in the first half...let’s go focus on the second half.”

Part of the success was the ability to establish the running game – Travis Etienne had four carries for 77 yards and two scores in the second half.

“[Duke] has a lot of seven-man boxes, so they were dead-set on getting those safeties down there, and they were playing soft coverage,” Elliott said. “They were rotating their safeties, so the biggest thing there was we didn’t get into a rhythm running the ball, because we weren’t have success. We weren’t staying ahead of the chains, so we had to throw the ball, and they were jumping back into cover two, doing a lot of line twists. It took us a little bit of time to get settled in, and once we were able to commit to establishing the run we found some success.”