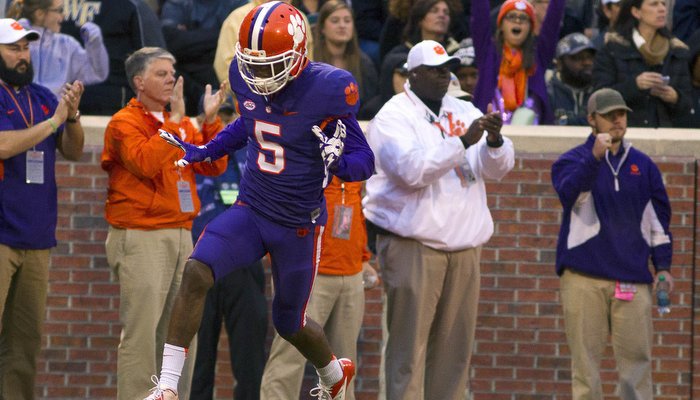 CLEMSON – The Clemson Tigers continue to roll, picking up their 11th win this season and 14th consecutive win dating back to 2014.

Deshaun Watson played into the third quarter and then at the end of the game after Kelly Bryant’s interception. Watson completed 24-of-35 passes for 343 yards, three touchdowns and two interceptions and rushed for 44 yards on 10 carries.

PLAYER OF THE GAME: Wide receiver Germone Hopper had arguably the best game of his career Saturday afternoon. Hopper, who has been inconsistent throughout his career, has played well the last two weeks, but made a statement against Wake Forest. The redshirt junior finished the day with three catches for 120 yards and a score. The touchdown was a 47-yard reception down the sideline.

THE GOOD:Clemson played nearly a complete game. The offense continues to click and they were able to rotate offensive linemen, running backs and wide receivers throughout the game after jumping out to an early lead. Seven players had at least one carry and nine receiver registered a catch.

The defense gave up several big plays last weekend against Syracuse but looked much better against Wake Forest. The Demon Deacons only had three chunk plays while the starters were in the game – a 20-yard run, an 18-yard pass and a 20-yard pass. Clemson’s defense held Wake Forest to just 152 yards and allowed just four third-down conversions.

THE BAD: Deshaun Watson has been very good all season long, and while the stats were good for Saturday’s performance, the sophomore quarterback threw two interceptions and had a couple of other passes that could have been picked off. Yes, it’s nitpicky.

THE UGLY: Special teams continues to be an issue. While Greg Huegel is perfect on field goals in ACC play, he has missed four extra points, including one Saturday that was blocked. Hopper also fumbled a punt in the fourth quarter.

WHAT’S NEXT: Clemson concludes the regular season next Saturday in Columbia against arch-rival South Carolina, a team that just lost to FCU foe, The Citadel.

Wake Forest finishes the season at home against Duke.