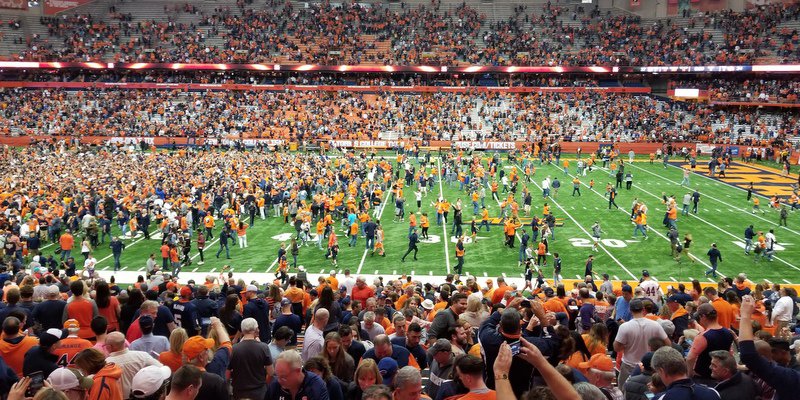 A.J. Terrell's family was out in force

A perfect trip into cooler weather and a glimpse of fall color hit a huge pothole late Friday night in the Carrier Dome.

We flew in to Buffalo Thursday morning and meandered our way through the Finger Lakes region of New York before settling into the hotel in Syracuse, and then woke up early enough Friday to go to Cooperstown. Cooperstown – and the drive to it – was gorgeous. Sunny with temps in the low 60’s, the leaves were an explosion of oranges, yellows and reds. In other words, a beautiful fall day.

What happened later was a fall of a different kind as Clemson teetered on the brink of total collapse for most of four quarters in Friday night’s game against the Syracuse Orange. The fall became complete as Syracuse improbably ran the final six minutes off the clock in their stunning 27-24 upset win.

What went wrong? Did anything go right? Because this is the open week – and availability with the coaches and players will be extremely limited – I am going to write two more columns on the state of the program. One will highlight the bad and the negative and the other (and second) will be the good news. My wife always tells me to deliver the bad news first, so that’s what we are going to do.

Back to the sights and sounds of the game. 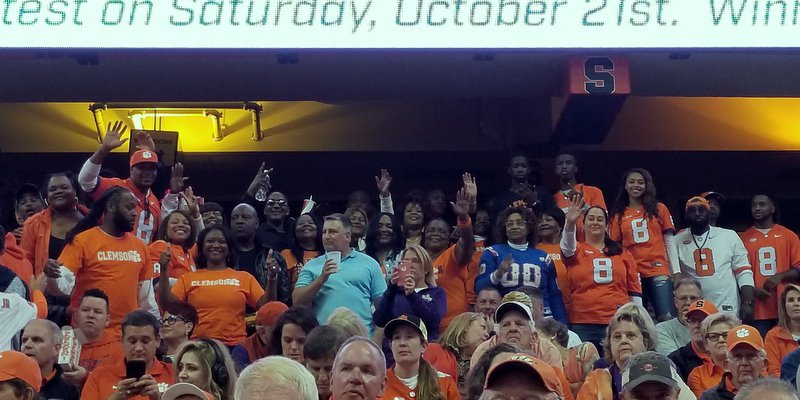 A.J. Terrell's family was out in force "

I walked around the stadium during pregame and turned to a friend and remarked about the complete lack of emotion and fans. It was obvious that the fans who would eventually show up would arrive late, and I wondered if the stale atmosphere would have any effect on the team warming up.

Indeed, it looked like a bunch of guys going through the motions.

First funny note, which kind of highlights the difference between schools from different parts of the country. Syracuse served the media in the press box a meal that consisted of fried chicken, peas, mashed potatoes, and biscuits. I was in line behind two Syracuse regulars who seemed confused over the meal choice until one remarked, “they must want to make these Southerners feel at home.”

Second funny note – while I was on the sidelines during pregame, Clemson photographer Carl Ackerman came over to me to talk and a security guard grabbed my credential and told me he needed to make sure I would head back to the press box before the game started. I assured him I would, and then Carl and I proceeded to have a conversation. He looked at us, and said, “I have no idea what language you guys are speaking. I can’t understand a word of it, so I’ll leave now.”

I don’t even have a southern accent. Well, not much of one.

As I walked over to the Clemson side of the field, I noticed a lot of Clemson No. 8 jerseys. As it turned out, Clemson freshman corner A.J. Terrell had 66 family members in attendance and his parents managed to finagle tickets for all the family members. Players who make the travel squad get four tickets and the others get two, so they begged and borrowed to make sure they had enough. Terrell has family that lives in the Syracuse and Rochester area, and his grandfather proudly wore Terrell’s jersey while telling me he was really a Syracuse fan.

Once the game was over, we walked into the postgame interview area, which abuts the Syracuse locker room. Dabo Swinney and the players had to conduct interviews while listening to the Syracuse players and coaches celebrate, dance and sing. At times, the party just beyond a thin wall was so loud that we couldn’t hear what Swinney was saying. To the victors go the spoils.

And, in case you haven’t seen, Clemson is no longer the underdog that people love to pull for when their own team isn’t playing. The loss set off a torrent of Clemson bashing from all over the country and from other teams and programs. That’s a good thing – it means you’ve arrived.

As for my final funny moment – there was a tweet from a Twitter account called Cuse Army that said, “Dear Clemson. This is our house.” A friend of mine sent me the tweet following the game with a smiley face emoji, and all I could think was, “You can keep it. I am not sure that anyone who’s ever been to Death Valley would want it. But to each his own.”

More to come. We speak with Swinney at 11 a.m. today via teleconference and will have updates shortly after.

This is our house. Oh and by the way, we are the real ORANGE team ??

Thank you,
Have a goodnight