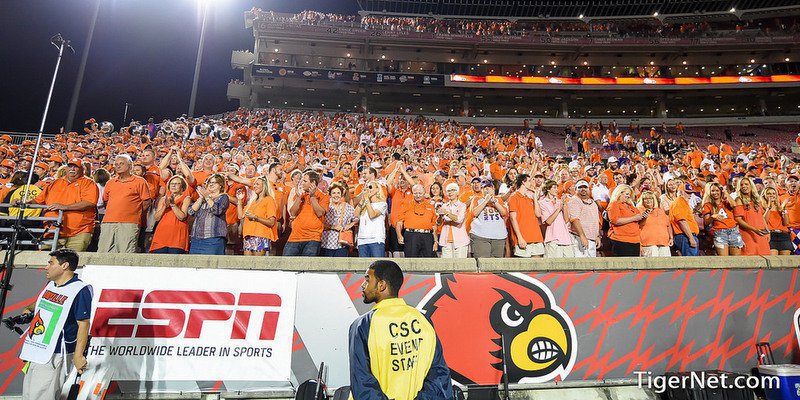 Christian Wilkins celebrates with the crowd after the win

The fun is in the winning.

The cheers emanating from the Clemson locker room early Sunday morning were deafening. A fairly large media contingent waited in a crowded hallway and in a small equipment room for head coach Dabo Swinney to finish with his team and conduct the postgame interviews.

The cheers grew louder and louder, and I smiled, thinking that perhaps Swinney had once again donned his dancing shoes and was celebrating a big win with his players. A person affiliated with the team stepped out of the locker room with a smile on his face, and I asked him if there was a dance party taking place.

He shook his head and smiled – the big cheers were because Swinney told the team they could wear their warmup suits home on the plane instead of their suits.

When you’re winning like Clemson, it’s the little things that keep you happy. However, quarterback Kelly Bryant came into the postgame interview area wearing his suit, and he was understandably all smiles. He was asked about his clothing choice, and he smiled and asked the media member if they liked his suit. Then he pointed to a bag of candy he had hidden in the jacket pocket as perhaps a reason for the suit coat.

It’s obvious that Bryant – like the rest of the Tigers – are having fun right now.

Christian Wilkins celebrates with the crowd after the win"

*Nikki and I started the weekend by making the trek to Fairfield, Ohio, to 5-star lineman Jackson Carman. We arrived about 15 minutes before kickoff, and I barely had time to get the camera settings adjusted before Fairfield held a 27-0 lead.

I wondered at that point how much of Carman we would see, but Fairfield went into a scoring drought and Carman wound up playing the entire game.

As we walked around the field and talked with those close to Carman, they made it known that thinking Ohio St. is the favorite is not the right way to think. There are a lot of people close to that program who think it’s between Clemson and Southern Cal, and more than a few of them think Southern Cal might be the actual leader.

He says he has no leader, but there is no doubting that he is full of potential. He’s bright, and he has varied interests off the football field. He says he likes to cook, and he taught himself to play eight instruments.

His coach told us that when they came to Clemson for a visit during the spring, he and Swinney stepped out on the balcony outside of Swinney’s office to enjoy the view and left Carman inside checking out Swinney’s office.

Carman spotted the guitar Swinney was given at the Music City Bowl, picked it up, tuned it, and much to the amazement of both coaches started playing Dust in the Wind by Kansas.

*We drove to Louisville Friday night, and early Saturday afternoon made the trek to the stadium via Uber. Hey, it was cheaper (and easier) than purchasing parking a mile or more away from the stadium and lugging all of the equipment in the heat.

Our Uber driver – a student at the University of Louisville – was incredulous that we thought Clemson was going to win. In his mind – based on what he had heard listening to talk radio in the city – was that Louisville had better players across the board.

Ignoring him, I was telling my boss about the trip to see Carman and he interrupted the conversation to ask if Clemson really thought they could compete with Ohio St. and USC on the recruiting trail. When I told him yes, he laughed out loud and told me I was crazy. I really wanted the same driver on the way back to the hotel after the game, but it wasn’t, um, in the Cards.

That was in line with a few of the radio shows I did in Louisville leading up to the game. I had one guy mention that if Clemson held Louisville’s offense to 600 yards and 40 points, they should consider it a win. Yep – road trips are the best.

I was told in the press box that many people considered it to be the biggest football game in Louisville history and that it was a big recruiting weekend. We hurriedly set up in the press box and made our way to the field, and I was hoping to get that big-game vibe. It never materialized.

It seems as if many in attendance had already resigned themselves to the fact it was going to be a bad night, or maybe they were wound too tight. I wrote in the prediction that I thought Louisville was putting too much emphasis on this one game, and that sense of impending doom was noticeable.

A few fans screamed “overrated” at Hunter Renfrow as he warmed up, and some tried to get to Clelin Ferrell, but it was nothing like a Clemson-FSU game or some of the other big games we’ve covered. Not even close.

*Once the interviews and the locker room celebrations were over and we packed up, I went downstairs ahead of the other three in our party to make sure the Uber driver didn’t leave us. As I rode down on the elevator, I met an extremely gracious gentleman who was an employee of the university.

He told me that he thought all week that Louisville would win, but he changed his mind when he got to the sidelines during pre-game.

“I went down there, and I saw all of Clemson’s defensive linemen, and they were all lean and strong. Physical specimens. Not a one of them had a big gut hanging over his pants,” he said. “I turned to my friend and said, ‘Louisville doesn’t look like them. It’s not even close. We are about to get whipped.’ And I was right.”

He was right, and it was something that everyone sensed, even before the game.

After the game, it was time for a quick cheer and then time to head home, happy. Because the fun is in the winning.