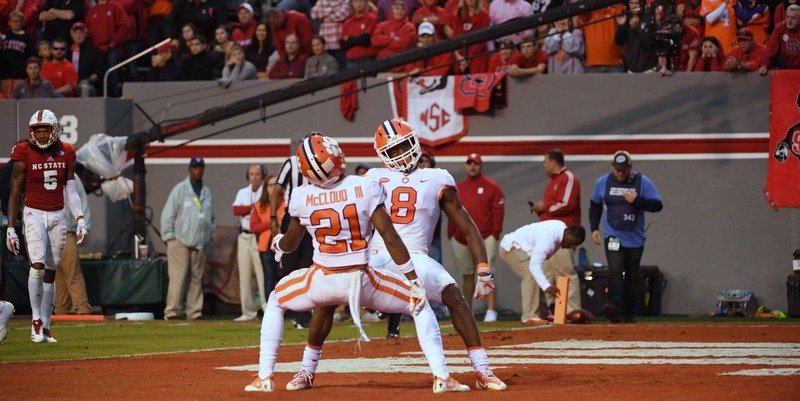 No. 4 Clemson made just enough plays on offense to overcome a terrible defensive effort, and K’Von Wallace intercepted a last-second pass by N.C State in holding on to defeat the No. 20 Wolfpack 38-31 at Carter-Finley Stadium Saturday afternoon.

Clemson can clinch the ACC Atlantic Division title with a win over Florida St. next week.

Kelly Bryant carried the ball 20 times for 88 yards and overcame early accuracy issues to finish 20-38 for 191 yards. Clemson rushed the ball for 224 yards, including 105 for Tavien Feaster. The defense gave up 491 total yards, including a 31-50 day from Pack quarterback Ryan Finley, who threw for 338 yards.

"It was an unbelievable ball game. It was a great effort by both teams. I thought NC State played a heck of a game, especially in the first half they kicked our butt," Clemson head coach Dabo Swinney said. "We knew it was going to be a tough, hard-fought game. This is an incredibly experienced and veteran-led team that we were going to play at home. I'm really proud of our team. We have a really young team and thought a lot of our guys grew up tonight. This is an unbelievable experience for our group. This was championship-type football where you have to make critical plays in critical situations. I'm proud of the perseverance of our guys, especially how we played in the third quarter when we got control of the ball game. I give them (NC State) credit though their quarterback (Ryan Finley) is a heck of a player. If you gave him any space at all he was taking it. We're fortunate to win the game, we got done what we came up here to do and that was to find a way to win and stay on track. There was no way to win the division if we didn't win up here. We got that done but we still have a tough road."

The Wolfpack struck first. Clemson took the opening kick, and on third-and-long Bryant overthrew the receiver and it was picked off by State at the Clemson 40. Three plays later, Ryan Finley hit a wide-open Kevin Harmon on a 40-yard touchdown pass and the Pack led 7-0 early.

The teams traded punts, but Ray-Ray McCloud made N.C. State pay after a booming 57-yard punt. McCloud gathered in the punt at his own 23, broke past two tacklers and then followed a convoy of blockers to the left side of the field, then the middle, and then back to the right for a 77-yard touchdown return. It was the first punt return for a touchdown for Clemson since Adam Humphries took one 72 yards against Louisville in 2014.

"That's why we didn't fire him. That's why we hung in there with him," Swinney said of McCloud. "I wanted to fire him many times in the last year or so but he grew up and matured. He's a special talent. I'm really proud of him and proud of those guys holding up. There's a bunch of guys out there getting the job done for him. We've created a lot of confidence and we have some swagger on our return team right now. That was one thing we talked about last night was somebody being the spark on special teams. What a huge play by Ray-Ray and all those guys. Huge momentum play."

The ensuing kickoff by Alex Spence sailed out of bounds, and State took advantage of the short field to score its second touchdown. The Pack dinked and dunked the ball down the field and scored on a one-yard run by Jaylen Samuels to go up 14-7 with 2:25 left in the first quarter. The drive lasted 12 plays.

The Tigers responded with a big drive that included a fourth down conversion near midfield. Facing a third-and-long, Bryant completed a seven-yard pass to Cain on the sideline. Swinney elected to go for it and Bryant picked up three for the first down. Bryant ended the drive with a 10-yard run up the middle into the endzone to tie the game at 14-14 early in the second quarter.

Clemson’s defense had no answer for the State offense, however, and Finley led the Pack on another scoring drive that ended with a seven-yard scoring pass to Nyheim Hines. The Pack led 21-14 with 9:29 to play in the second quarter.

The Tigers responded with a scoring drive but had to settle for a 26-yard field goal from Spence as Bryant’s accuracy issues continued to plague the offense. The Pack led 21-17 with just over six minutes to play in the half.

The Pack then continued to dominate the Clemson defense, putting together another strong drive that reached the Clemson redzone. The defense stiffened, however, and forced a 34-yard field goal attempt that went wide left.

Clemson drove down the field and attempted a 39-yard field goal as time expired. Spence drilled the first attempt, but State called a timeout before the snap and then called a second timeout. Spence missed the second one and State led 21-17 at the break.

The teams began a punting battle at the start of the third quarter, but the Tigers were winning the field position battle and NC State was unable to flip the field. Clemson’s third drive started at midfield, and Clemson took the lead nine plays later. The Tigers leaned on the running game, but Bryant hit Cain in the left corner of the end zone from 12 yards out for the score. Cain caught the pass just over the goal line, and Clemson led 24-21 with 3:25 to play in the third quarter.

Clemson forced another Wolfpack punt and the Tigers took over at their own 11. It took exactly one play for the Tigers to score. Tavien Feaster took the handoff, burst up the middle and raced untouched 89 yards into the endzone for the touchdown. It was the third-longest touchdown run in Clemson history, and the longest since 1993. With the score, Clemson led 31-21 at the end of the third quarter.

The once-stagnant Wolfpack offense woke up on the ensuing possession. Another bad kick by Spence gave the Pack good field position, and they drove down the field in just six plays, scoring on a 15-yard pass to Jakobi Meyers. Clemson led 31-28 with 12:23 to play.

The Pack forced a Clemson three-and-out and punt, and with the stadium rocking appeared to have taken back the momentum from the Tigers. However, Finley lost nine yards on the first play and threw a pass that was intercepted by Ryan Carter on the second play. Clemson took over at the Pack 27, but faced a 4th-and-5 at the 22. Bryant threw a pass to Renfrow a yard short of the marker, but Renfrow broke a tackle and turned it into a 16-yard gain. Three plays later, Bryant made the Pack pay with a two-yard touchdown run that made it 38-28 with 6:31 to play in the game.

How did the Wolfpack respond? With a 13-play. 84-yard drive that took almost five minutes off the clock. However, the Pack settled for a short field goal with 1:51 to play that made it 38-31 Clemson.

The Pack tried for the onside kick, despite having all three timeouts, and it was recovered by Renfrow at the State 47 with 1:51 to play. Bryant took seven seconds off the clock with a seven-yard run and the Pack called its first timeout. Bryant bled another few seconds off the clock but didn’t gain any yardage, and State called its second timeout with 1:36 to play and Clemson facing a 3rd-and-3 at the Pack 40. Bryant was thrown for a loss on third down, and after the timeout, Clemson punted with 1:31 to play and the Pack out of timeouts. The punt landed in the end zone, and State took over at the 20 with 1:24 to play.

State didn’t have much of a problem moving down the field, reaching the Clemson 28 in about 40 seconds. However, three straight incompletions led to a 4th-and-10 with 27 seconds on the clock. Finley hit Meyers on a long pass that appeared to put the ball inside the Clemson five, but State was called for an illegal shift. State didn’t see the clock running didn’t snap the ball til 11 seconds remained and Finley’s next pass was intercepted by K’Von Wallace in the end zone to seal the win.