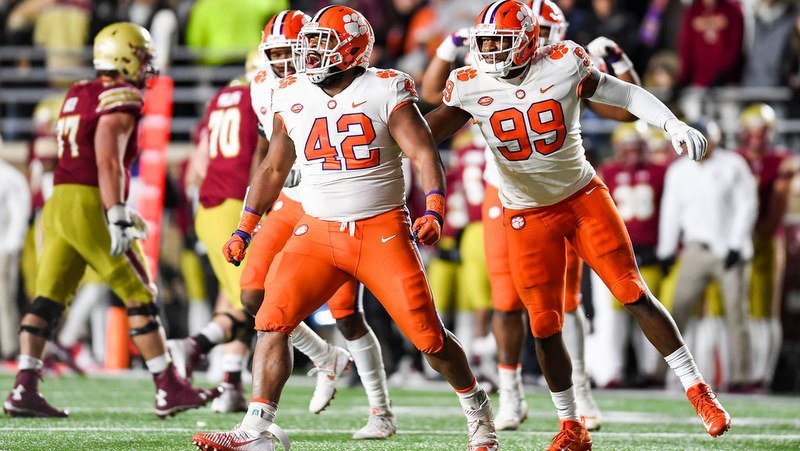 CLEMSON – There are still games to be played in the 2018 football season, but with every snap Clemson’s defense plays this season fans are watching history in the making.

I asked head coach Dabo Swinney after Wednesday’s practice if he’s ever seen a more dominant stretch of defensive played during his career.

“I don’t know. I’d have to get somebody to do some research on that,” Swinney said. “But I do know they’ve done a good job of keeping them out of the end zone, and we’ve put them in some bad situations. They’ve done a great job and they are playing well.”

According to an article that ran in The Athletic this week, the defense has played five ACC games and 74 drives since the start of October. In that span, the unit has allowed a total of three touchdowns and three field goals. They’ve had more drives end in takeaways (seven) than points, and they’ve forced the second-most punts (48) in the country during that span.

Overall, Clemson is giving up just 12.7 points per game and is holding its opponents to an astounding 82.3 rushing yards per contest. During the past five games, the Clemson defense has been utterly dominant, allowing 8.6 points per game. On Saturday, the Tigers surrendered just 1.98 yards per play to the Boston College offense.

None of that surprises Venables.

“It doesn’t surprise you if you know who they are. We have had talented guys in the past that it has impacted in a negative way,” Venables said. “Going in with this group of guys we knew it wasn’t going to be a problem with. They have just been very humble, grounded, selfless group of guys since they have been there. This year has just been a snapshot of who they have been.”

The concern heading into the season was the play of the secondary, but the Tigers sit ninth nationally in pass defense.

“It has been good. The guys have responded,” Venables said. “We have developed and gotten better as the year has gone on. We still have 4 or 5 games left. I really appreciate the leadership of the corners and safety and the development along with the buy-in.”