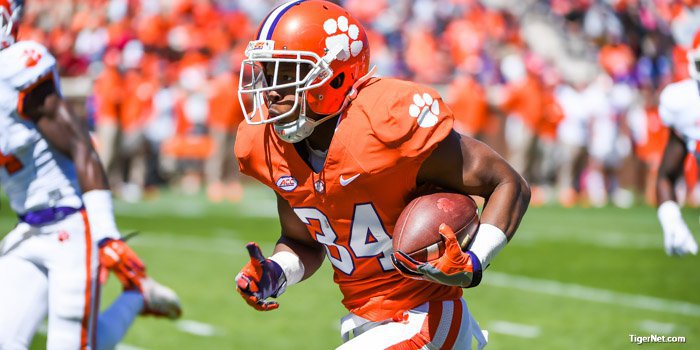 McCloud wants to be more of a deep threat this season

Ray-Ray McCloud had a solid freshman season with 29 catches for 251 yards and one touchdown in 2015.

But he’s looking to improve his game entering his sophomore season, specifically becoming more of a threat in the Clemson vertical passing game. McCloud averaged 8.7 yards per reception last year, and that average reached double digits in only two games: the opener against Wofford when he had eight catches for 80 yards and the win over N.C. State when he had one catch for 36 yards -- his season long and his lone touchdown.

He said he has spent time working with quarterbacks Deshaun Watson, Kelly Bryant and Nick Schuessler during the preseason to improve in that department.

“I’ve been trying to work on my deep balls a lot more,” McCloud said Monday. “I started off with D-Wat and Kelly and Nick talking to me a lot more and kind of communicating with the quarterbacks and let them know what I’m doing and what I’m going to be thinking when I’m running this deep ball, if I’m going to lean, if I’m going to force myself back on top. That’s been my main focus of fall camp, and that went real well in fall camp for me.

“Me and Kelly have been tight from just being in the same class and always hanging out. Me and D-Wat, really chemistry-wise, off the field and on the field, have gotten a lot closer, so I think that’s a key part of it, too. Same thing with Nick, and every day doing more and building trust with them.”

McCloud missed three games because of injury in his freshman season, suffering a knee sprain against Florida State. He returned for the ACC championship game and had three catches for 27 yards. Against Oklahoma in the national semifinals, he had two catches for 6 yards, and he added one catch for 7 yards in the loss to Alabama in the national title game.

McCloud is also getting time with the return teams and said he is working in a rotation with Artavis Scott, Hunter Renfrow, Cornell Powell and Tavien Feaster.

“Really, the deep ball is just technique,” McCloud said. “I’m not glad I got hurt, but when I got hurt, I had to focus on my technique more, and that made me a better player when I got healthy. That’s what I think elevated my deep ball a lot more.”

He thinks the receivers and defensive backs have elevated their games in the preseason, going at each other in practice. That should help both groups when the season gets going Sept. 3 at Auburn.

“We go against each other every day, so it’s very competitive,” McCloud said. “Receivers are looked at and focused on here, like, ‘Let’s see which receiver is doing this,’ but we’ve got just as good of DBs on this team. Every day is very competitive, and (Monday), the receivers didn’t have a bad day, but usually I feel like the receivers are winning more often than the DBs would, but (Monday), it was more like an even-type of game.

“We didn’t have a bad day as a receiver group. I felt like we had a good day, and we can improve, as always. The DBs were holding their own and working on their stuff and getting better.”

That work, however, now can focus on the season opener, and that’s a good thing for McCloud.

“Excited, because, the DBs … we’ve probably been cheating, too, but the DBs, sometimes when they get tired, they start to know what we’re doing because of the alignment and stuff,” McCloud said with a smile. “But it’s about time, really.”