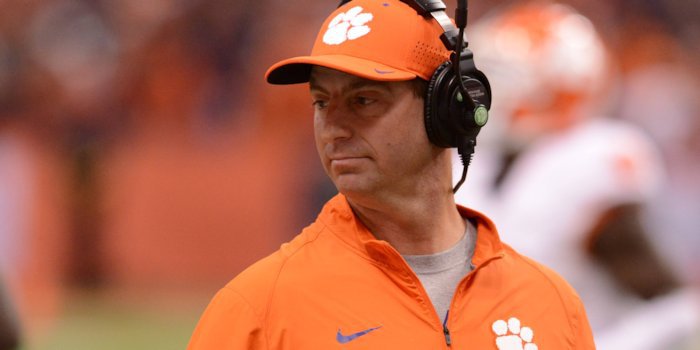 Bryant, the true freshman out of Piedmont (SC) Wren, has moved into the backup role behind starter Deshaun Watson and showed some of his promise in a 58-0 victory at Miami a few weeks ago, rushing for two touchdowns. Included was a 59-yard burst that showed his capabilities as a runner.

With that in mind, the offensive brain trust wanted to make Bryant a part of the game plan at Syracuse, and it was scripted that Bryant would start on the game’s third series. The Tigers were already up 14-0 and had all the momentum behind two quick touchdowns, and the coaches didn’t hesitate to call Bryant’s number.

Taking over at their own 25-yard line, Bryant lined up at quarterback and Watson split out wide. Bryant took the snap and ran up the middle but the ball was knocked loose and Syracuse recovered. The play was a turning point in the game as all the momentum slipped from the Tigers’ grasp, and offensive coordinator Tony Elliott said the game dictated that Bryant didn’t get another chance.

“In that situation, we wanted to get him in there early and get the ball in his hands,” Elliott said. “I wasn't down there on the sideline, but Coach (Jeff) Scott was down there and saw his reaction to that situation. And then we got into a situation where it was back-and-forth and we wanted to put the ball in No. 4 (Watson) and No. 9's (Wayne Gallman) hands and the guys that have been in dogfights and know how to keep persevering.”

Co-offensive coordinator Jeff Scott said the coaches have been wanting to get Bryant more touches.

“We had it in our game plan to go in on the third drive and do some things,” Scott said. “It didn't have anything to do as much with the first two touchdowns as we made ourselves include it in the game plan. We didn't have it scripted in the first nine (games) but we wanted to get him some reps. Unfortunately, after he put the ball on the turf, we decided we didn't want to go back to that the rest of the game. Hopefully here in the next few games he will get another opportunity and will learn from the situation.”

Elliott said that the coaches wanted to get Bryant reps in both the Wildcat and in a regular package.

“I think there was a little bit of both. Obviously, you don't want to take four (Watson) off the field because it's so early in the game,” Elliott said. “It started out as a Wildcat and then we wanted to get him in there and give our young guys an opportunity to play. But it didn't present itself, and we had to keep our number one guys in there and go in and win a ballgame.”

Scott said the coaches will now look to see how Bryant responds in the coming days.

“Obviously, he's a young player, and we wanted to put him out there in that situation. It's something we've been wanting to do the last few weeks, and we finally just made ourselves say that we were going to do it this week,” Scott said. “I think sometimes as a young player you can have success like he did at Miami, and then some tough times like he did today. The tough thing will be how he responds next week because we are going to give him some more opportunities. He is too good of a player and can do some things for us. On the sideline, I felt like he responded the right way but the big thing will be how he comes back this way. But the players and coaches will rally around him, and he will learn from it and learn that when he's in that situation next time he will take care of the football.”