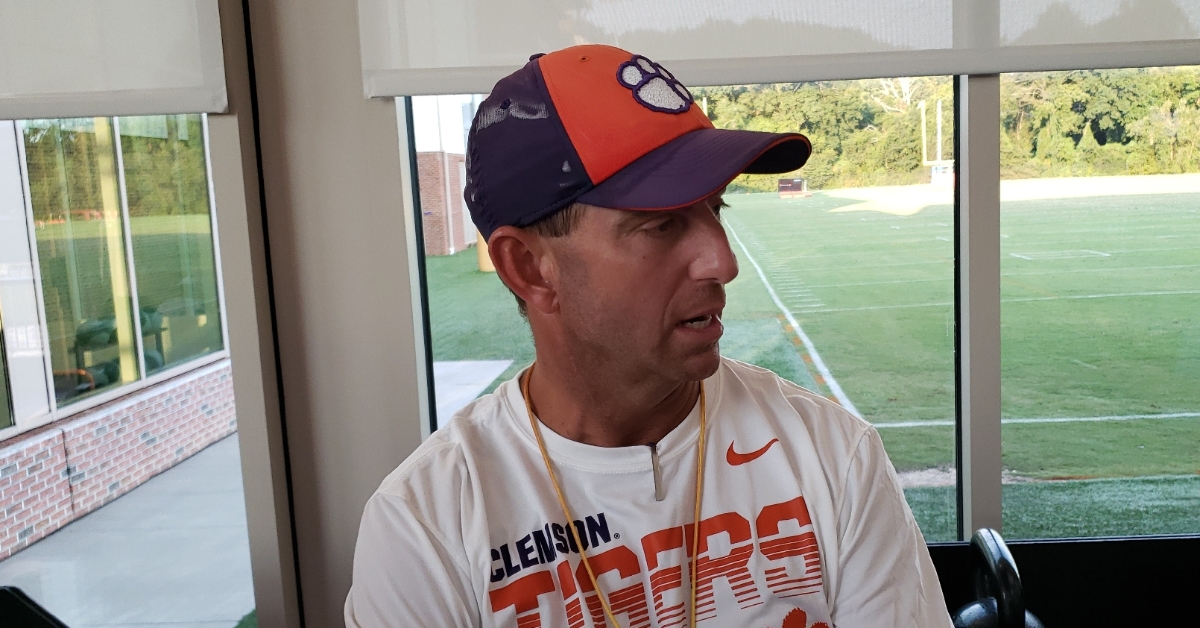 Visitors walking up to the indoor practice facility Wednesday afternoon might have thought there was an earthquake in the area – the metal in the facility was shaking, and the strains of everything from ZZ Top to Fallout Boy as the Tigers prepare to take on Syracuse in the Carrier Dome Saturday night. The Dome – also known as The Loud House – is expected to be loud with the team’s first sellout crowd in nearly two decades.

As a result, Swinney had his team practicing inside Tuesday and Wednesday.

“We are practicing inside. Two-fold - we wanted to be on the turf and we wanted it really loud,” Swinney said after Wednesday’s practice. “Plus, I wanted to keep them out of the heat and keep them juiced up and ready to go. But the other thing is that is just how we practice. We did the two-minute drill today as fast as we could go. We do enough good-on-good and it's fast tempo and it's what we do. It's not that big of an adjustment.”

The walls were shaking with the music Wednesday, a practice that Swinney said was better than Tuesday’s.

The Tigers played the first two games of the season in the friendly confines of Death Valley, and now Swinney wants to see how his team reacts to being on the road.

“I am just excited to go on the road. I obviously love playing at home. It's a simpler Friday for us and postgame. I am not looking forward to getting home at 5:30 AM Sunday morning,” he said. “I am definitely not looking forward to that. But it's just fun to go on the road. I think there is something exciting about it. At home, you have your whole team and everybody is on the sidelines, and now you can only take 72 guys and everybody is against you. There is just something fun about that. As a competitor, you love it. I am anxious, too.

“I want to see them go do it. We have a bunch of young guys. I want to see how they are going to handle. It's always a good time to load up the plane. I am sure somebody hasn't flown yet. Every year there is usually at least one. But I also enjoy just being with them and hanging with them. There is a little more time to hang out on the plane and then we will have our normal routine when we get up there. We will actually go to the Dome Friday night for a few minutes just to walk around and let these guys check it out.”

Redshirt freshman defensive end K.J. Henry had a sack Wednesday. Swinney said Henry is getting better but still makes a lot of mistakes. Swinney said there is no doubt that Henry can rush the passer, but he has to get better in other areas.

*Defensive end Xavier Thomas injured his ankle against Texas A&M, and Swinney thought Thomas was done for the game after seeing the star sophomore being helped off the field. Next thing Swinney knows, Thomas is back on the field and helping sack Kellen Mond.