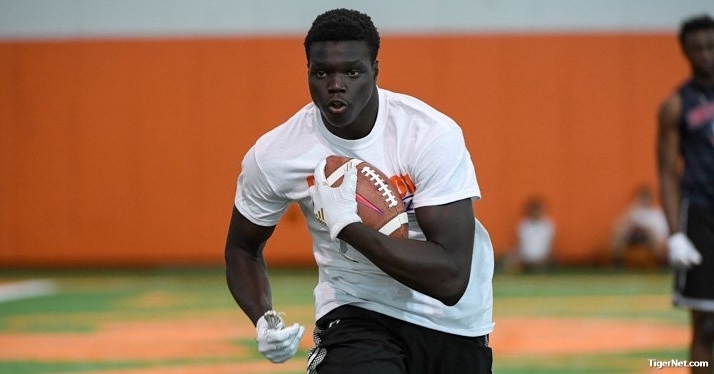 Ajou works out in the afternoon session of Dabo Swinney's camp in June.

By: Lukas Weese, Special to TigerNet

Ajou Ajou decided to pursue football, despite being a slam dunk and track champion in high school.

While growing up in Brooks, Alberta, where hockey dominates the landscape, Ajou went against the conventional sport, combining his height, speed and athleticism in becoming a wide receiver.

Now, the 18-year-old will be playing in the fall for the Clemson Tigers.

“I always want to be the best,” Ajou said to Postmedia Network back in May 2018. “You better come with it, because I’m coming full throttle.”

Tyler Greenslade first saw Ajou when he was the coach of the Provincial Under-16 team in 2016. The team played in Arlington, Texas, against American high schools, where Ajou plucked the ball out of the air with ease.

He was only in the ninth grade at the time but Greenslade knew Ajou was physically gifted for his age.

“He was quite physically developed,” Greenslade said. “Something that stays with him is his hunger to improve and get better.”

Ajou joined Greenslade’s football program as a sophomore at Harry Ainlay High School in Edmonton, Alberta, 420 kilometers (or 261 miles) away from Brooks.

Homesickness was bound to occur.

As Greenslade recalls, Ajou struggled early in the preseason, adjusting to playing competitive football and being away from home.

“He had a slower start with us,” Greenslade said. “In an exhibition game in Saskatoon, Ajou caught a long third-and-12 pass to convert the first down. It felt like a relief for him, providing lots of excitement.”

In his sophomore year, Ajou had 60 catches for over 1000 receiving yards. At 6-foot-3, Ajou showcased a natural physicality on the field. This continued in his junior year, leading the Harry Ainlay Titans to the provincial final.

After two seasons in Edmonton, Ajou knew he needed more exposure with Division I programs in the United States. After consulting with Greenslade, the young wide receiver transferred to Clearwater Academy in Florida. There he worked with head coach Jesse Chinchar, in a program that has developed a reputation for preparing international players. This includes Ontario wide receiver Jared Wayne, who committed to the University of Pittsburgh and defensive lineman Sio Nofoagatoto’a from New Zealand, who signed with Indiana.

“We’ve had our fair share of Canadians,” Chinchar said. “It’s the only other country that has a three-tiered system of high school, college and professional (football) like the United States. It makes it easier for kids to come down south for the exposure and winning culture.”

Chinchar saw Ajou’s natural athleticism and his ability to leap over defenders. He had the speed and agility but he needed to refine some skills.

“He didn’t know how to run routes well,” Chinchar said. “He became a really good route runner at the end of the season, as well as a solid blocker. It was a part of his process to become a more well-rounded football player.”

In his senior year, Ajou recorded 686 receiving yards on 39 catches for seven touchdowns. From hurdling defenders to catching passes in tight windows, Ajou demonstrated toughness as the season progressed.

“He did not know how to come out of a stance because he always had running starts,” Swinney said. “We are going to have the chance to mold him as a wideout guy. His leaping ability is off the charts.”

Given the depth at the wide receiver position at Clemson, it is difficult to predict where Ajou will end up on the roster. With his speed and willingness to attack, it makes Ajou a prospect who should not be underestimated.

“We are proud of Ajou and the great character and athlete he has become,” Greenslade said. “It is cool to see a guy like Ajou sign with a Power 5 school, making the most of the exposure he deserved.”