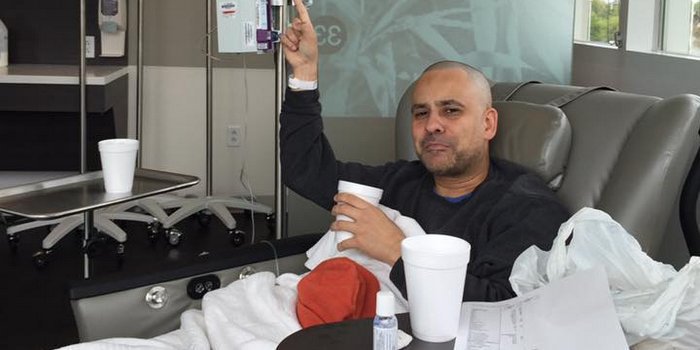 Bays and his friend Bart Foley pose with the championship trophy

Most Clemson fans feel like they are Tigers at heart, but Michael Bays takes it to another level. Bays was the beloved Tiger mascot from 1994-1997, and now he is fighting like a Tiger to beat cancer.

The fight is one Bays is familiar with. He’s already beaten cancer once.

Bays was working with the Greenville Drive spirit team back in 2007 when he fell and broke his leg.

“I broke my left femur bone at a Greenville Drive game, and that is when they discovered cancer in my left femur,” Bays told TigerNet this week. “I overcame it, and I’ve been walking. I have arthritis in my leg permanently, but I’ve been kicking around good.”

Bays has been a constant presence at Clemson athletic events – he’s been known to substitute as the Tiger when the students are on break, and he loves attending Clemson events. That slowed down last summer, however.

“I had gone back for some tests this past summer, and they first told me I was free and clear, and I got a second opinion,” he said. “Second opinion - went, and they did find some hot spots.”

What they found was multiple myeloma, a cancer formed by malignant plasma cells. Normal plasma cells are found in the bone marrow and are an important part of the immune system.

During his first bout with cancer, Bays underwent surgery, radiation and four bouts of chemo. This time around, he faces more chemo and a stem cell transplant, and he’s raising money. But not for himself. For research and to help fund a cure.

Bays and his friend Bart Foley pose with the championship trophy "

“My whole goal is not to raise donations for me or anything,” he said. “It is to just kind of my focus to putting money towards that cancer, and I’m just challenging people. If they want to be Be Like Mike, they can shave their heads or throw any dollar donation into my link for multiple myeloma.”

Bays decided to shave his head last week, and he let his two young sons share the duties. Now he faces a long road to recovery.

“Right now what I’m doing is a stem cell transplant and what they did is they put me in remission through regular chemotherapy,” he said. "They gathered a collection of my cells, so they collected about 13 million stem cells. What happened was they saved these cells, and a couple of days ago I went in and did what they call is high dose chemo, which just kills off every freaking cell in my body.

“The next day I go back and get what’s called a recovery with the stem cells. So I did that two days ago. So they infused these stem cells back into me. What they are going to do now is they are going to kind of regrow all of these new cells in me and help create a new immune system for me.”

Bays will fight his battle from behind closed doors for the foreseeable future.

“Now what happens with me is I’m kind in the bubble for 15 to 17 days,” he said. “I will hit the really bad part a couple of days from now. I’ve just got to stay away from people for the time being.”

He will fight – like he always has – with the heart and soul of lifelong Tiger.

“That’s kind of my thing, you know? I’m staying positive through everything. You don’t have it as bad as people think you do,” he said. “There’s people that have it worse than me. I am very fortunate that I’m in situation that I’ve got a lot of people around me, family-wise. I’m able to have medical benefits to handle this, handle myself financially, and the best way to do it is to put the spin on using the ‘Fighting Like a Tiger’ but doing that to raise money for research on this type of cancer. That’s kind of where my focus has been, kind of keeps you going.”

Bays set a goal of $5000 for the research and has already raised $4,500 as of late Friday. To donate and read more about Mike, click here for more information.