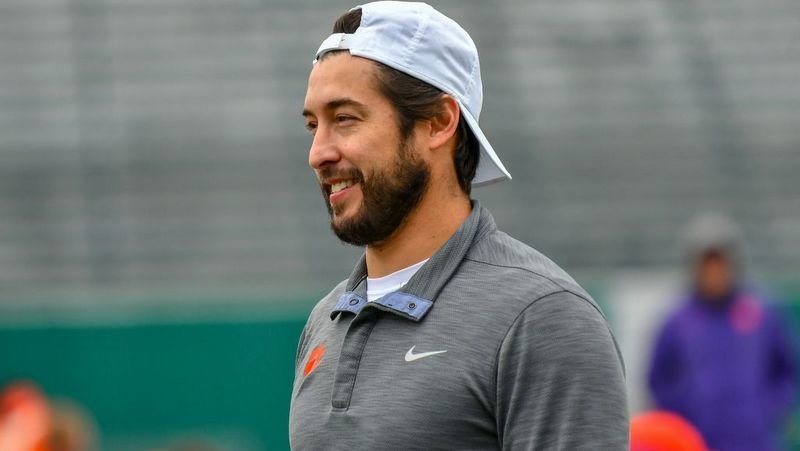 JP Losman doesn’t know where he will be working next season, but if it’s somewhere other than Clemson he knows his time in the foothills of South Carolina was well spent.

Following his collegiate career at Tulane, the Buffalo Bills took Losman with the 22nd overall pick in 2004. Losman spent parts of five seasons with the Bills and had short stints with the Raiders, Seahawks, and Dolphins afterward.

He’s currently on the coaching staff at Clemson, where he started in 2017 as an intern. The news came out Friday that Losman has interviewed for a spot as an offensive assistant on Kliff Kingsbury’s staff with the Arizona Cardinals.

Losman told TigerNet earlier this month that he wants to get back to the NFL but wasn’t in a hurry. Why? Dabo Swinney.

“Eventually, I would like to go back to the NFL, but I am having so much fun right here and right now I don't know why anyone would ever want to leave,” Losman said. “Which is why you don't see anyone ever leave on our staff. It's so much fun going to work every day and it starts at the top. Coach Swinney sets the tone and it is top down. Everybody follows his lead and when you have a leader like that it's a lot of fun going to work every day.”

Losman was looking for any type of work when Swinney called in 2017.

“It wasn't really my choice. I was trying to get in anywhere in college football and the only person to give me a shot was Coach Swinney,” he said. “He goes, 'Are you sure you wanna do this?' And I was like a coach, I have no other options. This is the only option I have in college football and it just happened to be here at Clemson. It has been an awesome and unbelievable experience and it's all because he called my phone.”

As an intern, Losman isn’t allowed to work directly (as an on-field coach) with the players, but he has enjoyed seeing the progression of Trevor Lawrence.

“People are always asking me what I think, and is he better than you or is he the best quarterback you've ever seen,” Losman said. “Honestly, I don't know, but I've never seen anyone this good at this young of an age. On the field, off the field, maturity, I love his hairstyle. Everything about the kid I love. I even showed him a picture of me with long hair and said I was one of the guys who paved the way for these guys with long hair at quarterback. It's been good to see him go through it every day, but it's been pretty easy. The kid is on all of the good lists - he does everything right on and off the field. It's been a pleasure.”

“I think it's when he comes off the field. Coach (Brandon) Streeter will ask him what did you see, and it's like he is up there looking at the field,” Losman said. “It's like he pushes rewind two or three times. He knows exactly what he saw, and he's seeing the same thing I am seeing. I tell Streeter that is exactly what I saw. That is a rare talent to see, especially at such a young age.”

Interesting note: Alabama's 44-16 loss to Clemson in the College Football Playoff national championship game marked the program's largest defeat in 12 seasons under coach Nick Saban. The last time Saban lost like that, he was coaching against the Bills.

Saban was in his second and final year as Dolphins coach in December 2006 when Losman threw three touchdown passes to lead the Bills to a 21-0 win. Prior to Clemson’s win, that game marked the last time Saban lost by more than 14 points.