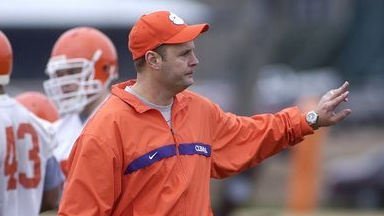 Blackwell coaches during a 2003 Clemson practice

CLEMSON – A familiar face roamed the sidelines of Clemson’s football practice late last week, and while there were many familiar faces and things to see, many other things have changed since David Blackwell wore the paw.

Blackwell was hired in December by East Carolina head coach Scottie Montgomery to be the Pirates’ defensive coordinator. Blackwell, a native of nearby Greenville, was an assistant at Clemson for six years, when he was in charge of the linebackers, and the Tigers were bowl-eligible in all six of Blackwell’s seasons on staff. He left after the 2009 campaign to take a job at South Florida.

Blackwell made the trip to Clemson last week with his coaches and spent time with Tiger defensive coordinator Brent Venables, and he admitted that things have changed for the better.

“I brought the defensive staff down for a couple of days to visit with these guys and talk a little football and get out of the office a little bit,” Blackwell told TigerNet. “The facilities are amazing, and the things they've been able to do are amazing. The upgrade in facilities and the quality of play have both been outstanding.”

The visit was a chance to catch up with Venables and learn a little something along the way.

Blackwell coaches during a 2003 Clemson practice "

“There is always something you can take from a visit like this. He is one of the best in the business and he's been very good to me through the years,” Blackwell said. “Even when I was at Clemson and he was at Oklahoma, we went out to Oklahoma and visited with them. He is a guy I've known for a long time and he's always been very gracious. We knock ideas off each other when we come in and visit, so it's been good for us to be here.”

What were his thoughts on Clemson’s new facilities and Dabo Swinney’s 2018 squad?

Blackwell coached with Swinney at Clemson and said he isn’t surprised at the success.

“He's been him. He is still the same person he has always been, and he believes in what he is doing,” he said of Swinney. “He has a plan and he's put facilities with the plan and they've been able to grow from that. He has hired good people and been very consistent.”

He then said he hopes that same kind of success can happen at East Carolina.

“I think we have a bright future. We aren't Clemson, but we can hold our own, especially in the AAC,” Blackwell said. “It's one of the fastest-growing universities in the country with 35,000 students. We have a med school and a law school. It's a wonderful place to live with a passionate fan base, much like it is here. I think the future is unlimited, but we have to keep building and recruiting and doing things the right way.”