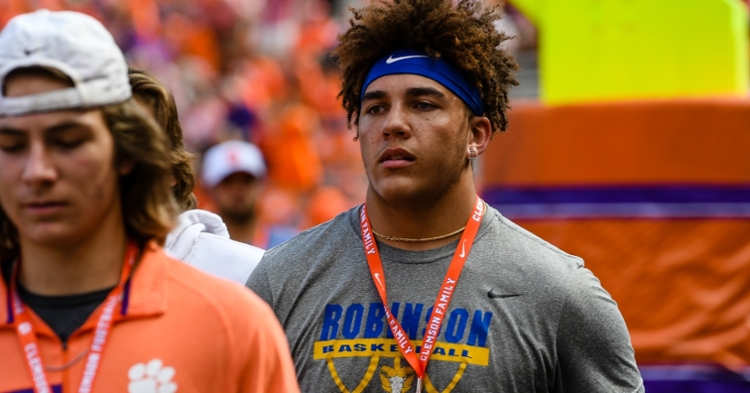 Leigh is shown here on a visit last season.

One of the top offensive line targets for Clemson in the 2021 recruiting cycle is 5-star OT Tristan Leigh (6-3 275) of Fairfax, VA. Leigh is ranked the No. 4 offensive lineman in the country and the No. 2 prospect in Virginia. As such, he owns offers from coast to coast. He has not narrowed the field but Clemson is very much in play, largely due to the work of Caldwell.

“I talk mostly with Coach (Robbie) Caldwell, we’re pretty tight,” Leigh said. “If I had an elite list, they would definitely be high up on it. I like the culture there. They have a winning culture there. And also, Coach Caldwell, he’s a real dude.”

Caldwell envisions Leigh filling a tackle spot on his offensive line, most notably on the left side which likely will be vacated by Jackson Carman after the 2020 season.

Leigh visited Clemson for the Florida State game. And he returned for the junior day in late January. It was then he got a better feel for what Clemson would feel like for him.

“I got a better feel than from the game,” Leigh said. “I know it was cool to be in the game-day atmosphere, but at the junior day, they really showed me how I would be incorporated into their program. And in the business world, I know they take care of their players and try to make enough opportunity for players to have when we retire.”

Virginia was the only other unofficial visit Leigh was able to make prior to the recruiting shut down due to the virus. His plan is to take his official visits when things reopen, and he has no timeline for a decision.