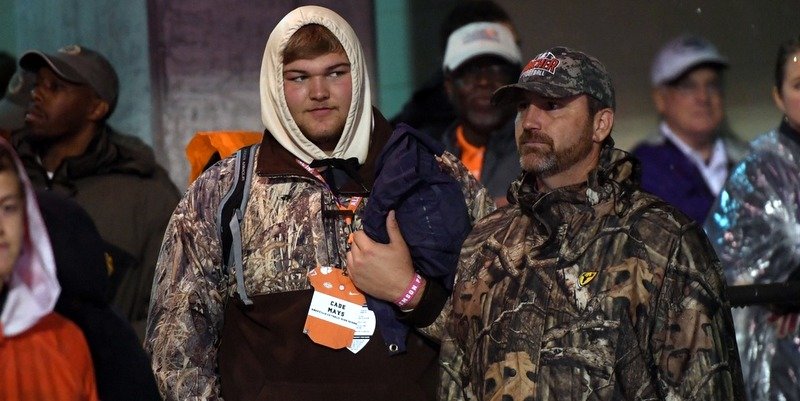 Mays stands in the tunnel with his father during pregame

Five-star offensive lineman Cade Mays has a lot to think about after Saturday’s visit to Clemson.

Mays is the nation's No. 2 tackle prospect, a Tennessee legacy and a long-time commit, so getting the Knoxville (TN) Catholic product to go somewhere else would be quite an achievement. However, Saturday’s visit gives Clemson the chance it needs with Mays.

“It was great. I had a great time,” Mays told TigerNet shortly after he left campus Sunday. “I got to spend a lot of time with the coaches and commits.”

Mays, ranked No. 14 overall, made the trip with his father, former Vols captain Kevin Mays. He also spent time with Clemson linebacker commit and longtime friend Mike Jones, a 4-star linebacker out of Bradenton (FL) IMG. However, Jones didn’t pressure his friend too much.

“I felt like he had a great time,” Jones said of Mays. “You know he’s my brother, but I didn’t really have to say much to him about the experience because everything about the program speaks for itself. The character of the guys on the team and the staff and the fans speak volumes, and I think he heard it all.”

Mays says that message came through loud and clear and that the culture at Clemson is one thing that stood out.

“Me and Mike are so close, so he knew what I was thinking,” Mays said. “He just kept telling me ‘I told you.’ Clemson is a different culture than anything I’ve seen. It’s very special. I couldn’t believe the stadium was sold out in the pouring rain. It’s just so real. Everyone is bought in, and Coach Swinney told me before the game, the‘fun is in the winning.’”

Mays stands in the tunnel with his father during pregame "

The rain began to pour about 90 minutes before kickoff and most of the game was played under a steady curtain of water, but Mays didn’t mind.

“I had a great time either way,” he said. “The rain didn’t bother me.”

The Clemson coach that Mays talked to the most was area recruiter and offensive line coach Robbie Caldwell.

“He just talked about his coaching style and stuff. Talked about the program and everything,” Mays said of Caldwell’s message.

Mays will be back on campus in three weeks for Clemson’s final home game. That visit will be an official visit – Saturday’s was unofficial.

“Yes, I’m coming back for The Citadel game,” he said. “There really isn’t anything I need to see. I just want to enjoy being on campus.”

Did the Clemson visit give him something to think about?

“Absolutely. I want to win a National Championship and get the best opportunity to play at the highest level,” Mays said. “Obviously, Clemson has the tools to help me achieve my goal.”

Nothing but great times in Tiger Town!?????? #ALLIN pic.twitter.com/0wcQoMuZeb