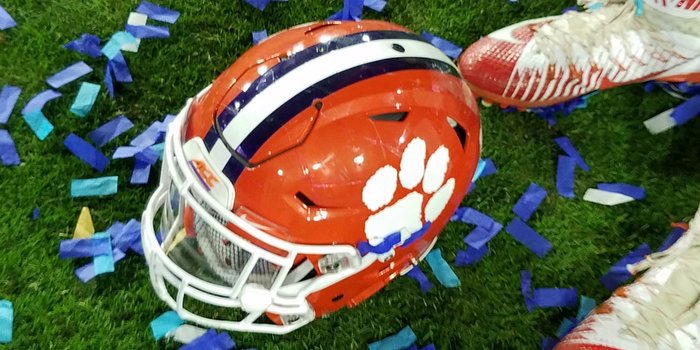 A year ago, the media barged into Clemson’s postgame locker room at University of Phoenix Stadium and dealt with the aftermath of the Tigers’ gut-punch of a loss to Alabama in the national title game. Saturday night, the Tigers were in the visitors’ locker room, and the celebrations were far different from the downcast eyes and grim resolve we saw after the loss to Bama.

Linebacker Ben Boulware sat in his locker, a Fiesta Bowl hat perched firmly on his head, and talked about leaving the locker room a year ago in tears. He left the locker room Saturday night in Phoenix with a smile on his bearded face.

All of Clemson left Glendale with a smile, because it was that kind of night in the Fiesta Bowl.

Clemson head coach Dabo Swinney stood on the podium as the confetti rained down and vowed that the Tigers will do a little more than just show up when they meet Alabama in the title game in Tampa in just eight days. Who can argue with him or the results? Since the start of the 2012 season, Clemson has knocked off the likes of Ohio St. (twice), Oklahoma (twice), Notre Dame, Florida St. (twice) and LSU.

Clemson is the only team with a winning record over Notre Dame (2-1), Ohio State (3-0) and Oklahoma (3-2), and Dabo Swinney is now 5-0 against those programs, all in the last four years. Four of the five victories were over top 10 teams, including the second-ranked (AP) Buckeyes Saturday.

I wrote in my prediction that I thought Clemson was the better team – it didn’t take Kirk Herbstreit to see the Tigers simply have more speed – but the feeling was reinforced after the team arrived at the stadium. One staffer held up four fingers and mouthed “we win by four touchdowns” as he walked by. I laughed, but when I ran into him later he laughed and told me I needed to start listening to him.

Another person close to the program told me in pregame, “If we win this one, we are going to win it all. We will take home the championship trophy. This team is the most focused bunch I’ve ever been around, and I think they will prove it tonight.”

I watched the Buckeyes warm up – I always watch the opposing team – and it didn’t take long to realize that while Ohio St. has recruited lights out, they didn’t have a Mike Williams or a Deon Cain or a Deshaun Watson or a Dexter Lawrence. And they certainly didn’t have a Clelin Ferrell, who made his presence known on the first third-down play of the game and never let up.

During the week leading up to the game, I had one Ohio St. writer tell me that Clemson simply hadn’t seen the kind of talent that Ohio St. would be able to put on the field, and he said that there was simply no way the Tigers could contain the three-headed monster of quarterback J.T. Barrett, H-back Curtis Samuel and running back Mike Weber.

What we saw in the Fiesta Bowl was a talented team play its best game of the season, and they’ll have to have that kind of effort next week in Tampa if they want to beat Alabama.

Once again, they will be underdogs, and once again the arrogance of another blueblood program will overshadow everything that has happened under Swinney’s watch. And that’s ok – this team has the look, and I was told earlier this year they were on a rampage to the national championship.

The rampage continued in Glendale, and it isn’t too far-fetched to think Boulware will have different feelings this time around.