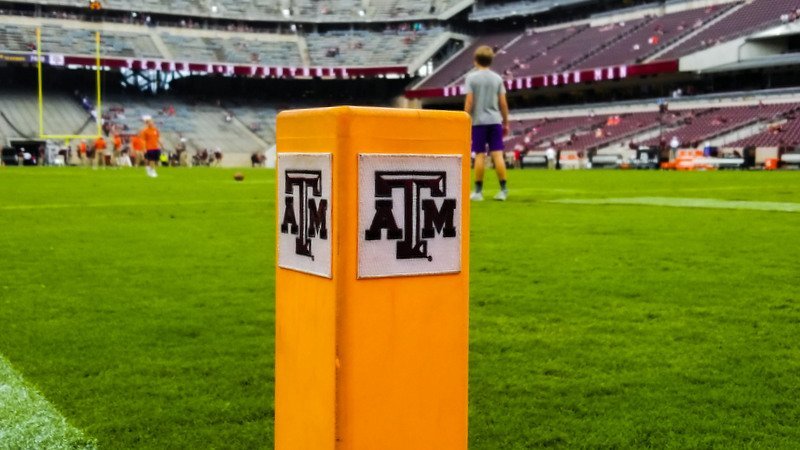 Texas A&M's Kyle Field is a great place to visit

Those were the feelings one member of Clemson’s traveling party texted me once the team plane arrived back in South Carolina early Sunday morning, and those are feelings I can sympathize with.

Because of Nikki’s pregnancy, I booked a flight that arrived in Houston around 9 pm Friday night. I picked up a rental car and made it to the hotel in College Station around 11. A little over 15 hours later it was time to head to the stadium and cover the game, and we walked out of the press box at midnight local time. I had time for a shower and a one-hour nap at the hotel, then made the drive back to Houston for an early flight out of Houston and I was home by noon.

The quick turnaround doesn’t mean it wasn’t a great trip. The trip itself was fantastic, despite the weather, and the environment in and around Kyle Field was all I hoped it would be.

We parked in a covered garage near the stadium (two other media members and me) and were ready to step out for the walk to the stadium when the skies opened up. We waited in a lobby of the parking garage with 50 or so Clemson and Texas A&M fans, and one Aggie fan made it memorable.

The storm lasted about 30 minutes, and the fan reached into his traveling cooler and started handing out beers to anyone that wanted one. The rain put a damper on his tailgate and he had more adult beverages than he could drink and he was passing them out to everyone waiting out the rain. It didn’t matter if they were from Clemson or from A&M – everyone got a beer. He was also more than happy to talk football to anyone that would listen.

On the field during pregame warmups, I ran into a former Aggie walk-on who played for Gene Stallings. All he wanted to talk about was Dabo Swinney and the job Swinney has done at Clemson. He said he keeps up with Stallings, his former coach, and Stallings raves about Swinney.

A few minutes before the start of the game, back in the press box, we experienced our first press box sway. I’ve only seen that twice before – once at Auburn in 2010 and once when I covered a South Carolina at Tennessee game years ago. One media member sitting near me didn’t like it, to the point I wondered if he would panic, but he quickly realized we were what seemed like several thousand feet in the air and he would never make it out of the stadium in time.

As for the press box at A&M – it’s huge like the rest of the stadium and thankfully, indoors. The press facilities are top-notch, among the best I’ve been to and certainly top five for me (In the ACC, it’s Virginia Tech, FSU, NC State, and Wake Forest with the nicest press areas). The pregame meal was pulled pork and BBQ chicken with a selection of sides, and then they served Aggie Dogs (huge hot dogs) with all of the fixings at halftime.

The only complaint, and it’s tough to complain when you get treated so well, is that the press area was so high you can’t tell if a pass is completed or not. There were times I simply watched the game on my laptop because of the height and the fact that the humidity caused the window in front of me to fog up.

After the game, we videoed my postgame wrap from the field and a few members of the security detail came over to me, asked if I covered Clemson, and when I said yes one of them said, “Clemson has a good team. But Texas A&M played 11 on 15 most of the night and we can’t win that way.” That was an obvious nod to the officiating, but I can go back and watch the video and point out penalties for both teams that weren’t called.

As for a final thought on the game – there are issues to fix on both sides of the ball and the depth in the secondary is a concern. Special teams have to get better, coverage in the passing game has to get better and the offensive line has to get better. Even the playcalling on offense needs to be tweaked. But to go into that environment with the noise and the weather and the way Texas A&M played, coming out with a win is the biggest takeaway.

Dabo Swinney said the game reminded him of the 2016 opener at Auburn with the way it was played and with all of the concerns. I think it reminds me a little bit of the win over Louisville later that season. You win, and you move on and you improve, something the coaches will preach to the players this week.

I have a friend who covers South Carolina (and is a South Carolina graduate) and he sent me a message early Sunday saying, “Great program win games like last night.” That’s important to remember.

And, a final, lighthearted note from the trip. We ate lunch Saturday at Fargo’s Pit BBQ in College Station, and the lady at the checkout had a name tag that said “Belender.” There is no way I was letting that go, so I asked if it was a nickname or her actual name. She answered and said, “Good or bad or causing fights, that is my name.”

I couldn’t let that go, either, and asked her for the back story. She said when she was born her mother gave strict instructions to her father that the baby should be named Belinda. The mother was having some difficulties with her health, and when the hospital asked for the baby’s name the father, in his Texas drawl, insisted to everyone that the girl’s name was Belender and that was the mother’s wishes.

And now you know the rest of the story.