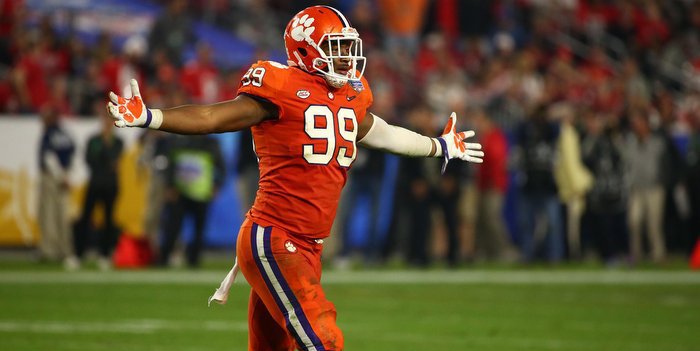 GLENDALE, AZ – The dictionary describes a feral cat as one that lives in a wild state, and the description can also be used to describe a quality of wild animals as ferocious or brutal.

Clemson has its own Ferrell Cat, and he fits all of those qualities. His name is Clelin Ferrell, and he followed up a monster performance in the ACC Championship Game with another big night in the Fiesta Bowl, earning Defensive MVP honors.

Ferrell finished the night with four tackles, a sack and three tackles for loss, but those numbers don’t tell the entire story. Ferrell was disruptive at the point of attack, and his pressure on Ohio St. quarterback J.T. Barrett forced several errant throws.

Ferrell told the media after the game that he learned to be a better player by redshirting last season.

“I would say coming off of last year redshirting I really got in touch with my spiritual side. That's another hats off to Coach Swinney, because he does open that door for us to get in touch with our spiritual side. That's one thing I really did,” Ferrell said. “But looking at it from a football standpoint, it's kind of crazy. Last year I was a part of the team but I wasn't playing. And to see them those guys like Shaq (Lawson) and Kevin Dodd, I look up to as big brothers having their opportunity and taking advantage of it last year, and then this year when we're coming in being a starter playing against the Ohio State, it's kind of crazy that I got to come out here and perform at a high level.”

Next up for the Tigers and Ferrell? A rematch with defending national champion Alabama. 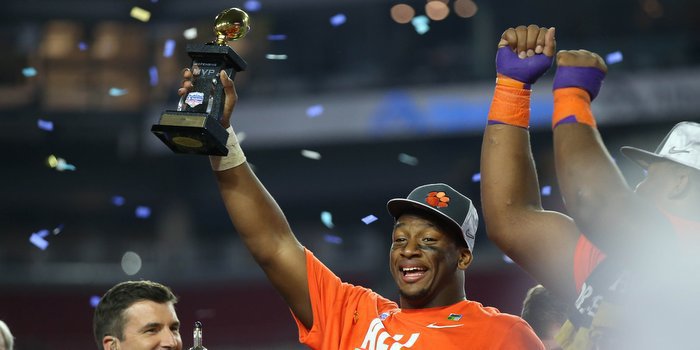 “I don't have any way to feel about it because it's just the next team for us. I haven't really looked at Alabama like that,” Ferrell said. “It is kind of crazy because of all of the success that they've had over the last couple of years. It's like, 'Wow.' I was a kid back home watching them in high school so it like, 'Yeah, I get to play against a team that's been one of the top two teams for the last 10 years.'

“It's been in the back of our minds. Coming into the season, we had a goal to get to Tampa Bay, but we just took it one day at a time and that's one of the reasons we've been successful. We haven't been assuming we're going to get to this point. We've been expecting it and working towards it every day.”

Clemson has opened as underdogs to the Crimson Tide, but Ferrell doesn’t care.

“I feel like we come in with a chip on our shoulder for every team because that just how we are,” he said. “We want to be known as a great defensive line. We want to be known as dominant. I don't think any of us expected to come in here and shut out The Ohio State, not being funny. It's just crazy because they're a great team. I will say this, we put the work in and we expected ourselves to play well.”

Ferrell’s redshirt also helped him recover fully from a torn ACL he suffered during high school.

“Tearing my ACL in high school was probably the darkest moment of my football career and my life,” he said. “It was a tough moment for me because I knew it was going to be a long road back and then coming in as a freshman last year, redshirting, I was like, 'Wow, I don't know how good I am right now.' It was a tough process. I'm happy that I had the right people around me to walk me through like Shaq Lawson and Kevin Dodd, and my coaches - Coach Venables and Coach Hobby and Coach Brooks. I'll do anything for those guys. I'll run through a wall for those guys. It was a tough process, but I'm happy because when I got my opportunity I felt like I took advantage of it.”

Venables said Ferrell has been on the rise all season.

“He was great. He was terrific. All of those guys were. I'm very proud of them. All season you could just see him getting better and better and better,” Venables said. “It started with the ACC Championship, that first play - they run a sprint out and we hadn't worked that play once - but when you read your key and you trust the guys that you lined up next to and do your job because that's what he's supposed to do on that play, but it doesn't always happen. I'm really proud of Clelin. That was a huge play, that short-yardage play early.”

Ferrell said he knows he’ll have to be even better against the Crimson Tide.

“I was happy we got the three weeks for this team because they do a lot of stuff. We just have to come out here and play a good game,” he said. “We don't have to play perfect to have success in the national championship, but we have to come out and play at a high level, so that's what we're going to have to try to do.”