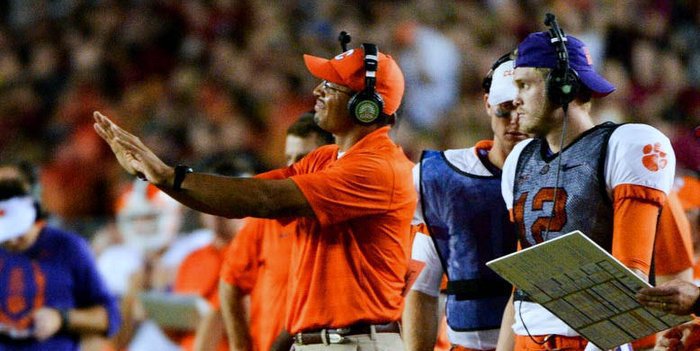 CLEMSON – There are only a few teams on Clemson’s schedule that match the Tigers’ talent and depth.

Florida State is one of them, and co-offensive coordinator Tony Elliott told the media earlier this week that the ‘Noles have more speed, physicality, and athleticism than any team Clemson has faced this season.

"In terms of physically, yes they do. I don't think we've seen two linebackers this year with the length and athleticism they have there, and their defensive ends are obviously two of the best in the country,” Elliott said Monday morning in the WestZone. “(Josh) Sweat off the edge is very quick off the edge, and #44 Demarcus (Walker) can play multiple positions. Those two guys inside are their two best interior linemen we've seen two date. In terms of skill guys they just keep rolling them, #37 (Kyle Meyers), #1 (Levonta Taylor), #27 (Marquez White), #24 (Marcus Lewis), I mean they got guys in the backend that are all athletic and all look the same. I think you have to be conscious of where #44 is. You always have to have a disaster plan if things aren't going right regardless of who we play, but if in some situation where it's bad we'll have a plan to help them out."

With all of the talent, the ‘Noles weren’t living up to expectations earlier in the season, but Elliott said they are playing better and better each week.

"Yeah, I think that's a fair assessment right there. You watch them earlier in the season, and there's no question Florida State is always going to have a ton of athletes on the field and some of the best guys at every position in the entire country,” Elliott said. “It looks like in the last four games they've kind of simplified and just allowed their athletes to go out there and play. You definitely see that as opposed to the first several games of the season."

Elliott continued by saying that expects Florida State to bring the everything but proverbial kitchen sink Saturday night to disrupt Clemson’s offense.

"It's hard to tell because earlier in the season they were a heavy pressure team and did some exotic things on third down and now they're kind of playing a lot more base with certain situations,” Elliott said. “They got an off week, and time to prepare, they've got an opportunity to get their guys ready. We've got to be prepared for any pressure situation. They're going to try and find ways to generate pressure on Deshaun and they're good enough to get pressure up front with just four and play coverage and also they're talented enough to bring guys from the secondary and back level because they can change the structure, so we're preparing for a lot of stuff."

However, after an off-week, Elliott expects Clemson’s offense to be up to the challenge.

"I think as coaches we try to evaluate ourselves each and every week to understand what we're doing and where our deficiencies and strengths are,” he said. “I think players it's a little more difficult because they're balancing their social life, school life, and everything that's going on. I think any time you have an off-week it kind of gives them that back and re-evaluate their goals. For us offensively, we still believe we have our best game in front of us. In the N.C. State game we did some good things offensively, we just had some glaring errors that kind of overshadowed how well we played offensively. I think it comes at a good time. It allows guys tot get healthy and some rest. I can see we're right on track with all our goals and time to evaluate ourselves and to be honest with themselves."

Deshaun Watson in the running game

"Whatever the game calls for. If they present the opportunity to him to pull the ball down and run, we're going into every game with a specific plan for him to have quarterback runs and not just because he's a dynamic athlete, but any time you can run the quarterback you pick up an extra hat. That gives you an extra blocker in the run game so we'll always have a plan. Each game dictates how he'll be running the football."

"I think you've seen good and bad. More good than bad. I think Boston College was a wake-up opportunity for him and that you've got to be perform every time you step out on to the field. He was challenged after that game and you saw him work on things he needed to get better on and some technical things that he needed to stay balanced in his sets and also punching his hands when he needed to punch his hands. As long as he can continue to stay at that level, then you're going to see great things out of him. Again, he's a young guy, and the young guy's going to have a bad game here and there. He responded the right way."

"You know he's actually getting a lot better. One thing that people don't realize about Tavien is that in high school he was a guy you either handed the ball too or ran a route. He didn't do a whole lot of pass protection. First, you've got to identify the defense and have an understanding of what the offensive line's doing, and any time you have something shift up front and move, it changes your responsibility, then you've got to add the technique piece of it. I've been very, very pleased with his progress. He's an intelligent young man and he takes pride in his work and he's learning how to identify his technique, and he's coming along. I'm pleased with where he is in pass protection, and I'm excited that he comes to work every single day."

The backup running back job

"I think it helps a ton (for other guys to get first team reps). If you go back and analyze C.J. in the game, I thought he did some good things. There were also some opportunities where he could've done a little better but I think that is an experience thing. Wayne understands and has a chemistry on the line whereas other guys aren't getting quite as many reps and repetition and comfortable to extend those three-yard plays to five-yard plays to seven-yard plays. It was critical for all those guys.

"I think if we were in a position where Wayne wasn't available, he (C.J.) would be the guy to go to. He had a good week of practice during the bye and had a little more pep in his step, and those other guys are nipping at his heels, but if we went into it right now, I think C.J. would be the guy to start.”

"No question, he's a tough competitor and basically had to take that helmet from him against N.C. State. He wanted to come back in; he knows no fear, and that's what makes him a special player. He's not afraid of contact, and he wants to be out there with his guys. He believes in his ability to help this football team win, and he just loves to play."