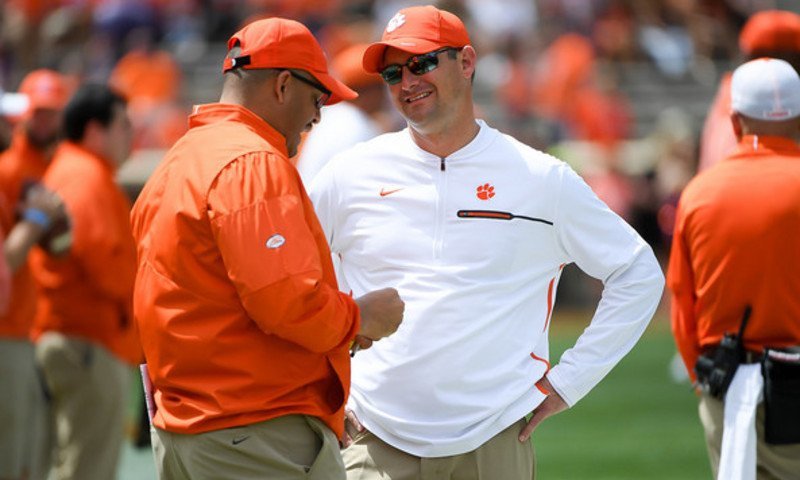 CLEMSON – The Clemson offense hasn’t had any problem finishing games this season but getting off to a fast start has been an issue that co-offensive coordinator Tony Elliott hopes to correct.

Elliott says the answer to the problem isn’t an easy one to find.

“I wish I knew the answer to that, and the crazy thing is we’ve had the best weeks of practice leading up to these past few games,” Elliott told the media Monday. “I’ve been focusing on my room, especially Travis. If you look back at the Georgia Tech game, Travis (Etienne) drops a pass early that puts us in second and long. That put us off script and it’s hard to play off script when you’re in second and long and we get out of rhythm.

“Then last week against Wake Forest, second play of the game, he drops another pass. We’ve talked about it, it’s an inside joke; I won’t share why he dropped the pass. It puts a smile on my face, but we’re going to work through that. I don’t know the answer but we’re going to keep working on it and challenge these guys to understand the importance of every single play.”

The open date was a chance for the offense to work out some of the kinks.

“The biggest thing is our precision and execution; I felt like our guys were headed in the right direction but we just didn’t execute the precision that we needed to,” Elliott said. “We have to improve on third down, we’ve been good in some games and bad in others. We have to focus on our alignment and the way we set up, make sure we aren’t tipping plays. As we get into these final six games, our opponents have a lot of film and information on us regarding our alignments. So we have to challenge our players to not be too comfortable, focus on getting better, and getting ready for NC State.”

When the Tigers have had success, they’ve done it running the football and currently rank fourth in the nation in rushing, something that Elliott is happy to see.

“Our guys take a lot of pride in running the football, Travis is really coming into his own, and I hate that Tavien (Feaster) got hurt the other week because he was really starting to pick up his play,” he said. “Because of our ability to run the football, the defense has to decide whether they’re going to put seven in the box or are they going to play us with the two shell, and if we can run the ball when they do have their safeties back deep?

“It sets up the play action, it sets up a lot of things we can do. Pleased the way we’ve been running the football, but we need to work on some motop-tierls and be even better. We want to be balanced, if we can be balanced with the run and pass game then that puts a lot of pressure on the opposing defense.”

The Tigers take a step up in competition this week, facing an NC State team that ranks 35th nationally in total defense.

“You gotta give them credit, they’ve worked their butt off with recruiting. They’re a top-tier program and their defense never really sees a drop off,” Elliott said. “Right now, on paper, they don’t have a lot of returning starters, but all those guys in the front four and the two deep have played a lot of football. They recruit to their system and they know what they want to do on defense. They’re a very confident group, they’ve played us well over the past couple years ,and they’re going to come in here excited to play.”