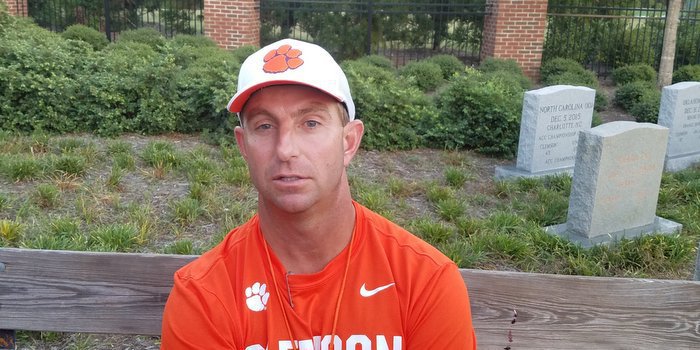 CLEMSON – How do you eat an elephant? One bite at a time.

Clemson head coach Dabo Swinney met with the media following Wednesday’s practice, and he was asked about this weekend’s matchup with No. 3 Louisville in Death Valley. Swinney broke into a big smile and said he’s just as excited as the fans about what’s on tap starting at 8:22 p.m. Saturday night.

“We have a tremendous amount of respect for them, and it’s going to be a heck of a ballgame. They are all special, but there are certain special moments along the way,” Swinney said. “I always tell them, 'You eat an elephant one bite at a time.' Some bites have a little more juice to them than others. This one is going to be a fun one.”

It was a year ago – following Clemson’s win over Notre Dame in the rain – that he coined the phrase “Bring Your Own Guts” and he said this is another BYOG game.

“There is no question. You better bring your hearts and guts for this one,” he said. “You go tip-toeing through the daisies on this one you will get exposed pretty quick. You better show up and be ready to go. We will be ready, and they will be ready, and I can't wait. Two great teams battling it out and one team will win and one will lose and try to control their own destiny.”

The offenses will be at the forefront of the conversation heading into the game, but Swinney said the defenses would determine who wins.

“Two great defenses. That's the way it's been the last couple of years,” he said. “It's been a defensive-type of game and harder to make hay offensively in this game. Credit to both defenses. We've done just enough to find a way to win a tough game. We will see how it goes Saturday night.”

He was asked about the program’s mantra of “the next game is the biggest game” and Swinney said the phrase has turned a program that worried more about uniforms than wins and losses into a title contender.

“We are going to have some setbacks along the way but that doesn't define us. The mentality is in place that we have to have. It's got to be different than the fans,” he said. “I know how it is with the fans. There are certain games they get more excited for, but it just can't be that way. For a long time, I felt like that is the way it was at Clemson. It was more about what uniforms we were wearing. I used to get letters saying, 'You have to wear this uniform because you win X amount of times in this uniform.' I am like, give me a break. That's why we threw all of that crap out because it affects the players. We play to a standard, and our guys have bought into that. We don't prepare any differently.”

The late kickoff will be a chance for the coaches to show off Death Valley at night to a bevy of high-profile recruits who will be on hand.

The status of Austin Bryant

“He's not quite ready, but he's better. He will not play this weekend. He's not quite ready for the show, but he's inching closer. He's doing pretty good but he is kind of getting his football legs back and there is no way we are going to throw him out there in a game like this. Now that he's been cleared, he has to work his way into the football part of it. He's doing all of the competitive work and he's inching closer.”

The status of Hunter Renfrow

“He's actually doing really good. He goes through all of the drills, and he catches everything, does all of the routes versus air and catches the ball. He can do everything, but the problem is he can't tuck it. So we are not going to put him out there until he can tuck it like he needs to from a ball security standpoint. If it was another position he could play. We are going to dress him out Saturday, and he's our third holder. Lord help us if we need our third holder. But if we did he's actually the third guy. In his mind, he can play.”