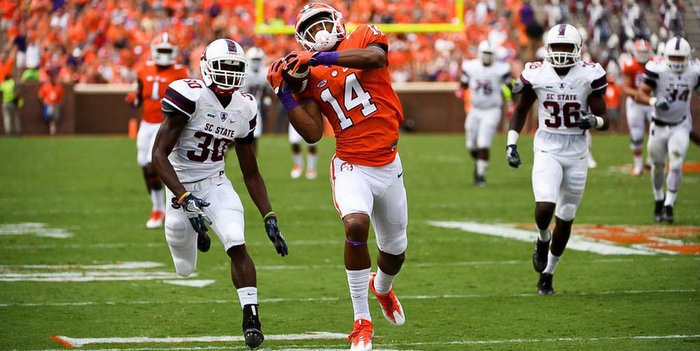 Overton hauls in a touchdown against SC State

Diondre Overton’s first career touchdown reception is a play he will remember as long as he lives, and even though the talented freshman didn’t see a lot of passes come his way in the latter part of the season he knows his time is now.

Overton arrived at Clemson as a 4-star prospect with unlimited potential. He was rated as the No. 135 prospect nationally in the ESPN300, the 18th-best wide receiver in the nation by ESPN and the sixth-best prospect out of the state of North Carolina for the 2016 recruiting cycle.

Overton put up stellar numbers his senior season at Greensboro (NC) Page, catching 78 passes for 1,251 yards and 15 touchdowns. He also had a rushing touchdown for 16 total touchdowns while adding seven interceptions on the defensive side with 34 total tackles.

The coaches made the decision early in camp to use Overton this season in the hopes of getting him enough reps to prepare for him for the 2017 season, where he will be counted on to help replace the production lost by the departures of Mike Williams and Artavis Scott.

He showed his talent early, hauling in a 45-yard touchdown pass in the win over South Carolina St. in the season’s second game.

“My first touchdown catch against South Carolina St. is something I will always remember from this season,” Overton said. “I remember going and getting that ball and then scoring. I got to the sidelines and I remember celebrating with all of my teammates. It's easy to watch them and learn from them. I've just been watching and waiting for my turn.”

The catch wound up being the high-water mark for Overton on the season. He didn’t play in seven of the team’s 15 games and hauled in just one more reception on the season – a three-yarder in the blowout win over South Carolina.

Overton doesn’t feel like the year was wasted, however.

“It has been a learning process for me. There have been a lot of good times throughout the whole year, and I have really enjoyed my freshman year,” he said. “I learned to utilize my strength and work on my releases. I have worked on my releases coming off the ball. I have watched those guys and I was glad to have them in front of me so I could watch them and learn.”

Spring practice will be his chance to show the coaches he is worthy of earning snaps.

“Spring ball is when I will make my impact,” Overton said. “I will utilize everything I've learned and show Coach (Dabo) Swinney and the other coaches what I've learned. I want to show them where I am as a football player.”

He then said that he doesn’t expect the offense to miss a beat, even with the losses of the Williams, Scott, tight end Jordan Leggett, running back Wayne Gallman and quarterback Deshaun Watson.

“Talent-wise, we are the same. We may be a young group, but we have learned from the people ahead of us,” he said. “I don't really think we are going to take a step back. We've learned our lessons, and now it's time for us to show what we can do.”

Overton’s freshman year was made easier by the fact that longtime friend Cornell Powell not only shares the same position, but was one of his suite mates.

“It's been great having my childhood friend here and sharing everything with him,” Overton said. “It's been like having a part of home away from home. It's been great to have him here.”

The lanky freshman said he played most of the season at 6-5, 205 pounds, but hopes to be around the 215-pound mark by the start of next season.