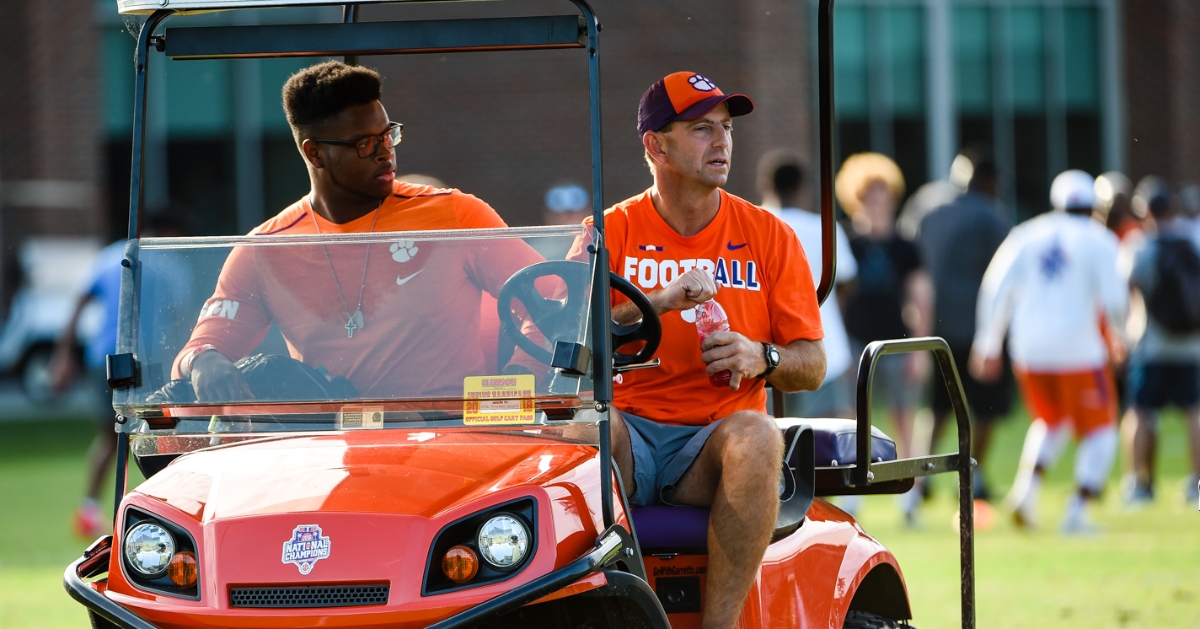 Swinney is hopeful his June camps can still run as scheduled.

The NCAA has halted in-person recruiting activities but Clemson football recruiting continues to hum right along in large part because the staff is so good at evaluating prospects.

The NCAA has extended the current recruiting dead period to May 31st, the organization announced last week. The mandatory recruiting dead period was put in place by the NCAA just one day after winter and spring sports championships were canceled due to the COVID-19 pandemic, and was set to last "until at least April 15, at which time the Division I Council Coordination Committee will evaluate.” However, with the fluid nature of the coronavirus, the NCAA extended the date.

“Recruiting is great. To be honest with you, we missed our spring game and that is always a huge opportunity for us,” Swinney said. “We would have had a lot of recruits on campus. But we've already had two big junior days and we have ten commits. We are only probably going to sign about 18 guys in this class, so we are very focused on who we want to fill those spots. And most of the guys have been on campus for us already. We certainly wish we would have had the day (spring game) for a lot of reasons. First of all, very few people can get 70,000 people in a stadium and create an unbelievable game atmosphere for their team. But it's also awesome for recruiting, so we missed that. And then for us, we haven't been able to have guys come see practice and things like that.”

However, the coaching staff is staying in constant contact with targeted prospects.

“We are still communicating with our recruits daily just like we would be if we were sitting in the office. It's really not any different at all,” Swinney said. “The big difference is that when the spring game was over, we would have spent the next two weeks doing our exit meetings and then post-spring stuff. And then our coaches would have hit the road for the month of May and got the chance to go out to the schools and watch practice.

“You can't talk to them, but you can go and see them in person and those types of things. But now that isn't going to happen. And we weren't going to have a lot of guys coming on campus in May anyway because we were all going to be on the road. Our next time to get everybody on campus is in June for the camps. The biggest change is not being able to go out on the road in May.”

Recruiting via social media and video calls is the new normal for the coaches.

“But, again, to be honest with you we are very focused on the guys that we want to fill the remaining spots and we touch base with those guys every day,” Swinney said. “We have recruiting meetings and our recruiting staff is still putting together all of the stuff that we need to send out whether it's by social media or snail mail. But we can text all of those guys and they can FaceTime us, so our communication has been great. And our evaluation process has been really, really, good.

“We spent a lot of time evaluating on all of the tape - we do that anyway - but we've had even more time as a staff to do that stuff. So it's just part of our daily routine. Pretty much every day I am talking to somebody or texting them. So recruiting is going very well and our class is off to a great start for 2021 and I have no doubt we will finish it up with a great group of guys that we are targeting and hopefully we will be able to get guys back on campus this summer.”