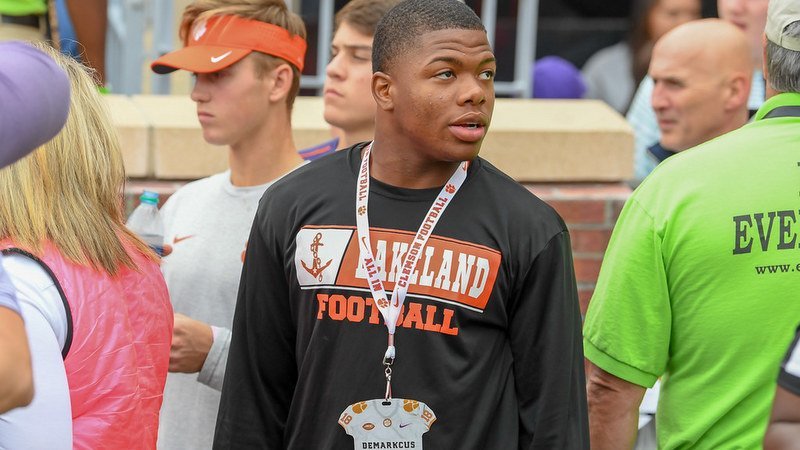 Five-star running back Demarkcus Bowman committed to Clemson Friday. Bowman is the third 5-star prospect to commit to the Tigers, joining defensive tackle Bryan Bresee and cornerback Fred Davis II. The Lakeland (FL) product also had offers from Florida, Florida State, Miami, Alabama, Ohio State, Georgia, and what amounts to every other top school in the country.

The commitment bumps Clemson's current 2020 class to No. 1 in the country in the 247 rankings, ahead of LSU, Alabama, Miami and Florida in the top five. Clemson’s class in No. 2 in the nation (behind LSU) in the Rivals rankings.

The commitment continues a strong recruiting presence for Clemson in the state of Florida. Clemson has the top two players in the state of Florida's 2020 class in Bowman and Davis and now counts players from seven different states and Washington, DC. It’s interesting to note that the University of Florida finished second in the Bowman sweepstakes, which is a little bit surprising because Lakeland has been known as a feeder school for the Gator program.

Allowing players like Davis and Bowman to escape Florida is also an indictment on the status of the state’s top three programs – Florida St. is a mess under Willie Taggart, Miami has undergone yet another coaching change, and Florida is still in the building stages under Dan Mullen.

What does it mean for Clemson?

Bowman has it all – the 5-11, 185-pounder has a physical running style, and he’s not afraid to run between the tackles. He led Lakeland to a state championship last season in one of the state’s highest classifications. Bowman also has speed, posting a 4.47 40 yard dash, a 10.82 100 meter dash, a 4.31 shuttle, and a 36-inch vertical leap at the Opening Regional in Orlando. At the state 4A, Region 2 track meet a week ago, Bowman ran the 100 meters in a blistering 10.41, a personal best.

If Travis Etienne leaves for the NFL after next season, Bowman will walk into a great situation.

Lyn-J Dixon will be entering his third season, and Chez Mellusi and Michel Dukes will be entering their second on the Clemson roster. Like many running backs coming out of high school, he will have to work on catching passes out of the backfield, and he will have to learn how to run block up to running back coach Tony Elliott’s exacting standards. We’ve seen in the past that no matter how good a running back is carrying the football, playing time will be limited until the blocking skills improve.

The coaching staff will take one more running back this cycle as Elliott looks to rebuild depth. California 4-star Daniyel Ngata (brother of Clemson receiver Joseph Ngata) and 4-star prospect Kobe Pryor are the top targets at this point. However, the Tigers have been in contact with 5-star prospect Zachary Evans out of Houston (TX) North Shore. Evans has been scheduled to make trips to the Clemson campus but has yet to make an appearance. If he does, the Tigers could jump firmly into the fray.

As for the rest of the weekend – 5-star quarterback DJ Uiagalelei out of Bellflower (CA) John Bosco will choose between Clemson and Oregon Sunday. A commitment from Uiagalelei would give the Tigers a fourth consecutive 5-star commitment and put them in line for the first-ever No. 1-ranked recruiting class in school history.