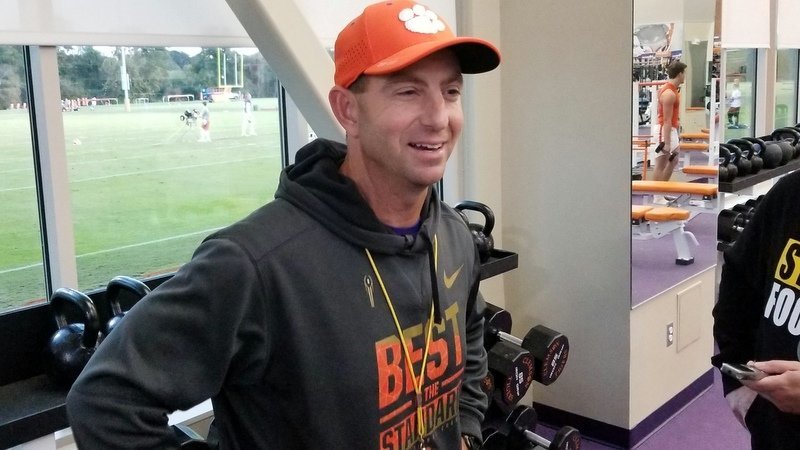 CLEMSON – You can’t get the crown ‘til the leaves turn brown.

No. 2 Clemson plays at Florida St. Saturday at noon, and late in the practice, the strains of Florida St.’s Warchant echoed all over the football facility, and Swinney said it reminded him of his days at Alabama when the Crimson Tide would play Tennessee. The Alabama coaches would play <>Rocky Top all week long, in practices and meetings, and by the time the game rolled around the players were sick of the song.

“It reminds me of when I was at Alabama. Every third Saturday in October, we would always play Tennessee,” Swinney said. “We don’t do it here, but you’d walk in the building and Rocky Top was playing. You’d go out to practice and Rocky Top was playing. They played it so much we made up our lyrics. It’s just stuck in my head. These guys will be carrying that with them for the rest of their lives. The Warchant. It’s fun. We crank it up. Usually, we just have loud music and noise but with these guys every year, we always crank up The Warchant.

Fast forward to the present day, and Swinney said the cooler weather, a big game, and a rivals’ song remind him of why this is the best time of the year.

“It’s a lot of fun. This is what it’s all about. It’s getting a little cooler. I think Cheech told me, ‘You can’t get the crown til the leaves turn brown.’ The philosopher Cheech,” Swinney said of Coffman. “You put in so much work and you look up and go, ‘Dang, we’ve only got 25 days left in our ACC play. That’s it.’ We’ve been working since August 1 and these guys have grinded all year.

“Now, you’re right here and we’re all in this race and you’re 24 days now of prep and play away from trying to achieve a goal. For us, it’s to win the division. It’s a lot of fun to get to this point and be pretty healthy and to have developed some depth. It’s exciting. Anytime you play Florida State, it’s always exciting. Clemson and Florida State, I’ve been here 16 years so this is one of those special ones, that’s for sure.”

Florida St. has allowed 18 sacks this season, but Swinney says the Nole offensive line is getting better.

“I think they were just trying to figure out their personnel and who does what best within their scheme,” Swinney said. “I think they’ve had some injuries so just trying to get the best combination of the best five to give them a chance. They’ve kind of been a little more consistent in who’s been playing where.”

He then said the Seminoles are still good on special teams.

“They’ve still got one of the Aguayo’s. It seems like they’ve had one of the brothers forever,” Swinney said. “They’re very talented. Been a little inconsistent this year - around maybe 58-percent - but very talented. This will be as good a punt returner as we’ve seen. No. 29 (DJ Matthews) is the real deal. He takes a million chances. He took one - almost two to the house - against Miami.

“He had a big one on Louisville. Northern Illinois wouldn’t kick it to him. He’s a really, really good player. Hopefully, we can have the same type of success as we had on the kid from Wake Forest a few weeks ago. That kid was awesome. They’ve got a left-footed punter and they do a lot of rugby stuff. That’s a little different. They’re really good. A very talented roster from top to bottom.”

Swinney finished by saying the Tigers are healthy entering the home stretch.

"I think we’re in a really good spot for this stage. Next week I’ll tweak practice a little bit," he said. "Next week will be game nine, week 10 and add on another three weeks and it’s week 13, so it gets to the point where it’s about getting your details and your plan down and being sound technically and fundamentally while getting enough physical work to be game ready. I’ll tweak that a little bit. We’re in a good spot, and we’ve been fortunate. Hopefully, that will continue to be the case for us."