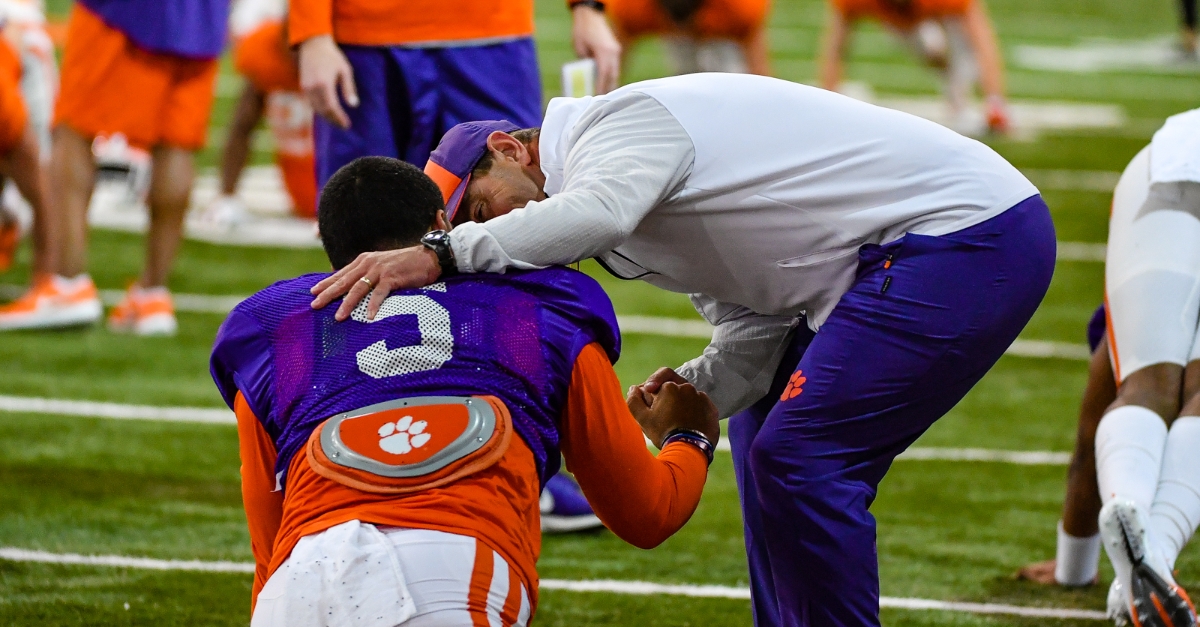 Swinney says he refuses to live in fear

Dabo Swinney has been known to act the part of a pastor and take the congregation to church, and he did it again Monday when responding to criticism for his statement on the COVID-19 outbreak.

Swinney participated in a conference call with media last Friday and he said that he has “zero doubt” that the college football season will be played, despite fears that the virus outbreak will linger into the fall. Social media quickly jumped on the “bash Swinney” bandwagon, and Swinney said he wasn’t surprised at the outcry.

“I am not surprised. Listen, there are so many blessings to having this job that I have and I have worked my whole life to get to this point,” Swinney said on Off Campus with Mark Packer on SiriusXM Monday. “ The blessings are unlimited as far as the job I have and the things I get to do. But there are a lot of negatives that come with this job, too, and one of those is criticism and that is something that I've just accepted. It doesn't matter what I say or what anybody says there is going to be criticism. It doesn't surprise me at all. You know, I could say the sky is blue and somebody would be as mad as anything. That's one thing I've learned over the years. I don't get affected by that. I just speak my heart.

“I just answered the question the other day. That is the other thing. You answer questions and you try to be honest and transparent and you answer questions, and then you get blasted because somebody might not agree with your answer or something like that. But I am not out blasting somebody else because they have a different opinion than me. It just comes with the territory. That is just the way it is.”

Swinney said he refuses to live in fear, and despite the criticism, his answer remains the same.

“As far my answer, it would be the exact same thing I said the other day,” Swinney said. “All I live my life on is faith. Faith and fear are the same things. It is in believing in something you can’t see. So, I just chose faith. I just believe in our country. I believe in this world. I believe in unbelievably smart people that we have out there. But more importantly, I believe in God.

“I believe, believe, believe in God. He is so much bigger than this. There are so many fearful things, but God can stamp this thing out just as quickly as it rose up. I don’t have any doubt that is what is going to happen. That is my belief.”

Want to be negative and blast him for his beliefs? Blast away, because he will turn that into a positive.

“If somebody wants to blast me because I believe that things are going to turn around, then that's fine. They can blast me for that. That's okay. I just try to live my life with positivity,” he said. “I am very realistic, and I am very open to whatever, but I believe this what is going to happen and my belief comes from my faith. If you are not a person of faith it is hard to relate to that and I understand that, but it doesn’t matter what I say.

“You’re going to get blasted or ridiculed or whatever because maybe your comments don't align with someone else’s or somebody else wants to promote their agenda and attach it to something you said or whatever to get clicks or things like that, so it just kinda comes with anytime you do something like this and you have a platform and you say something that is on your heart, there is going to be criticism. It just is what it is.”

Swinney then took the congregation to church and reminded everyone that hope is better than fear.

“I'm just very hopeful. I think that's what God gives you. He gives you hope,” Swinney said. “Jeremiah 29:11 says, 'For I know the plans I have for you. The plan is for good, not for disaster. The plan is to give you a future and hope.' If there is hope in the future then there is power in the present and that's what I believe. I have hope in the future and that gives me power in the present to deal with what we're dealing with.

“I believe in prayer and I'm praying daily for our leadership, for our doctors and all of these experts that God will work through them to create a cure or a vaccine or whatever to give people peace. I know this country is amazing and this world is amazing and we're going to get back to our lives sooner than later. That's what I believe. We might be on Elon Musk's ship to Mars in August, I don't know. I believe that we're going to kick this thing in the teeth and nothing will change that for me.

“Over 2,000 years ago, we had a major world crisis going on. It's amazing that this is all transpiring around Easter and the Resurrection. God took something that was evil and used it for eternal good. I think God will be glorified and use this moment and turn it into good and I can't wait to see it happen. In my mind and in my heart I truly believe that Jesus is the hope of the world and this time is creating a huge pause in the world and in everyone's life and it is my hope that God will be glorified through it.”