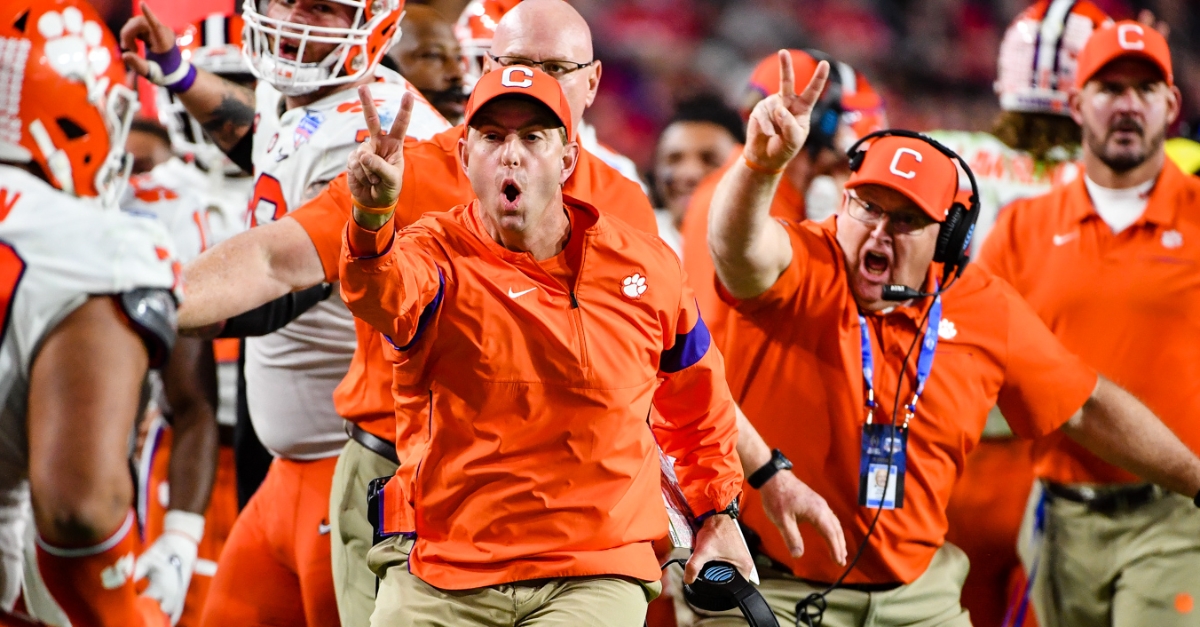 Dabo Swinney has been successful as a head coach.

Dabo Swinney’s life ambition was to take care of children and young people, but he wanted to do it in a doctor’s office. Instead, he’s doing it on the football field.

It looks like Swinney was born to be a head coach, but he told Tanner Tessmann on Chum Chat last month that he went to the University of Alabama with the hopes of being a pediatrician.

“I didn't go to college to get into coaching. I actually went to college to be a pediatrician. So I was a pre-med biology major for three years and I realized I was doing it for the wrong reasons,” Swinney said. “The only reason I was doing it was that doctors make good money. I had been so broke for so long and I've seen my family fall apart and I've seen my family struggle and my mom struggle and I was like I am going to be a doctor and I am going to make a great living. And I loved my pediatrician. I went to him until I was 26 years old and he always made me feel better and he was always happy and that is what I wanted to do.

“So, after my junior year in college, I realized I didn't love it. I was doing it for the wrong reasons, and I was going to have to go to school for ten more years and I didn't know how I was going to pay for that. I just wasn't passionate about it, even though I was doing well. But it was a tough thing because I felt like I was giving up on my dream that I had had. But sometimes God has a different plan for you. And He gave me peace in that, and I made a decision and I switched over to the business school.”

Swinney went on to get his degree with the hopes of running his own hospital one day.

“I said I am going to get my degree in hospital administration, and I am going to run a hospital and the doctors are going to work for me,” Swinney said. “And I went on and got my degree in that and that was my mindset. And I had already taken a job back in Birmingham with a company and we were going to manage doctor's offices and we were buying their practices and this and that. We won the National Championship fall of 1992 and now it's the spring of 1993, I am finishing my degree and I am doing up an internship at the hospital and I am finishing up my degree and I went out to spring practice.”

That one spring practice helped set him on his current course.

“You have to understand, I had played three sports my whole life - I was baseball, football, and basketball - and I was always playing ball and always a part of a team and all of a sudden I am not part of a team,” Swinney said. “We are coming off the first National Championship since 1979 at Alabama, so it was a big deal, not like now when they win it every other year so it was a big deal. We'd had a parade. I am out there watching practice and Coach (Woody) McCovey, who was my receivers coach and who I had played for for three years, he asked me if I had thought about coaching and told me I would be a good coach. Next thing I know, I am talking to Coach (Gene) Stallings and I am like, 'I don't think I want to coach and I don't think I want to go to school.'

“And then next thing I know, Coach Stallings says, 'I need a GA (graduate assistant) and you start in July.' I was like, I am done with school, but he said, 'I need a GA and you start in July. You need a Master's.' So the next thing I know I have called this guy and told them I am not taking the job and I am going to get my MBA, but I am still thinking I am not going to coach. But then I think they will pay for my grad school and that will help me get my MBA and I will be better prepared. Within a week of being a GA that summer, I knew that was what I was called to do. And that is what happens. If you're seeking God's guidance he will align the right people and open the right doors along the way. His plan is always better and it was just like this moment of clarity in my life. It was like, 'Wow, this is what I am supposed to do. This is what I have prepared to do.' And so the rest is history.”