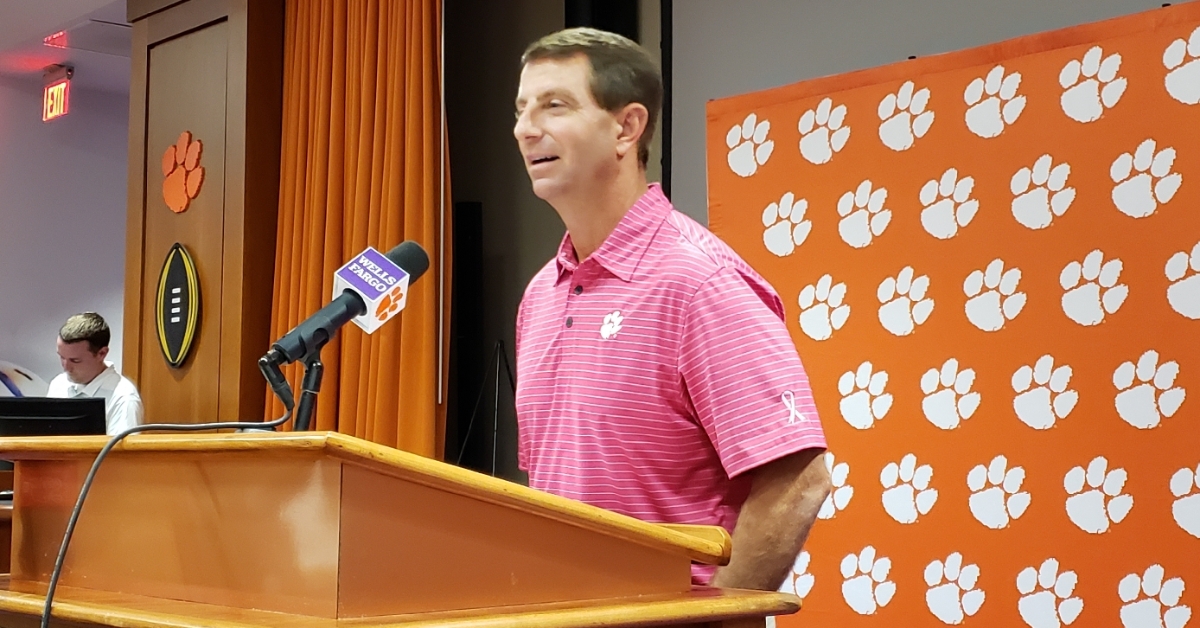 Swinney says he is pumped about a night game in Death Valley.

CLEMSON – A night game in Death Valley and a physical opponent. What could be better?

No. 2/4 Clemson hosts Boston College Saturday at 7:30 on Homecoming and head coach Dabo Swinney is pumped.

"We are pumped to be back in Death Valley. We've got just three home games left,” Swinney said during his Tuesday press conference, “Hard to believe. These opportunities are special. It's Homecoming. I always enjoy getting out with the students this week and watching their progress on the floats. I know it's raining but it's never slowed anything down around here.

"Boston College is 4-3. They have had two last-minute losses to Louisville and Wake Forest. They didn't play well against Kansas. They're very competitive. Their quarterback, Anthony Brown, got hurt. I've been impressed with what they have done.”

Boston College ran for 429 yards in a 45-24 victory over NC State last weekend.

“That game last week, it's like watching 1990 all over again when you watch the tape. No tricking anyone,” Swinney said. “It's just downhill football. This is old school. There is a certain physicality that you have to have in a game like this. I'm anxious to see how our guys respond to the challenge that BC will present. They're sixth in the nation in rushing offense. We're 10th in total offense and they're 11th in total offense. They're No. 1 in fewest sacks allowed. They run the ball a lot, plus their passing game is play-action, boots, and screens.

“They have great tempo, which is unusual with them. Mostly they are a 12-personnel team (1 RB, 2 TEs). They do a nice job. Their two backs, 240 and 250, they're big, big backs. They like contact, they move the pile and they have a lot of pride in what they do. They're well-coached and well-coordinated. They're going to line up and run the ball. They're going to keep handing it off. They just wore N.C. State down last week. They rushed for 429 yards on N.C. State and N.C. State had been giving up just 67 yards rushing going in.”

The Eagles are ranked 116th nationally in total defense.

"Defensively, they're man-coverage, they don't have great depth upfront but have created some pressure with their blitz schemes,” Swinney said. “They've tried to stay out of third and long and have done a great job there with their coverage and double-rat stuff. We have to be efficient on offense. We have to stay on schedule. A lot of man coverage. They will line up and challenge you.

“Richard Yeargin is a player we coached. What a great story he is. I texted him last week. It was inspiring to see him play. I know he has worked really hard and started against N.C. State. I look forward to seeing him. Also, No. 99 (TJ Rayam), his dad and I played together at Alabama. He's from Alabaster. His dad, Thomas, was a great player at Alabama. They are plus-seven in the turnover margin."

On BC running back AJ Dillon

"He's a very different guy. He's 250 pounds. He's going to go through you. He'll drag you. You see guys like that in the NFL every week. It's a challenge, especially for our back-seven guys. Get those big boy pads out."

"He has been good. He's practicing every day. He's got a great attitude. I've been very pleased with him and how he has handled his situation. He's got a smile on his face. He's on our scout team."