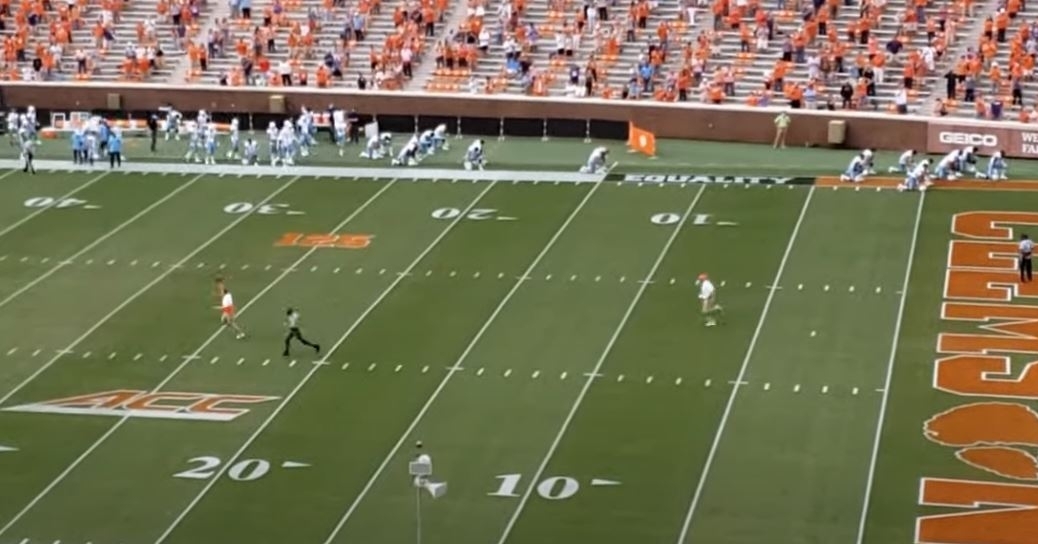 Swinney and the Highway Patrol officer race each other onto the field.

Dabo Swinney is a creature of habit, but when the Tigers run down the hill this Saturday before the game against Virginia, Swinney will take a different route to the sideline.

When Clemson ran down the hill against The Citadel in the last home game, things were different. The cheerleaders and the band were on the hill instead of on the field, and the Death Valley playing surface was eerily empty. Swinney didn’t take notice – he was at the top of the hill pumping his fists and reveling in the experience of another game day.

When the cannons roared, Swinney went down the hill at his usual breakneck speed. To those watching it appeared Swinney was racing his bodyguard, a member of the South Carolina Highway Patrol, to the 50-yard line. When Swinney reached midfield, he realized things were a little different.

That means he will changes things up this weekend.

“That’s called being a creature of habit. I’m going to have to coach myself up,” Swinney told TigerNet. “I just came down the hill and kind of like I normally do, you run through the band, you go down there and you take a left. Typically, I turn around and high-five the guys as they’re running through the band. So, I get down there and then all of a sudden I turn around and I’m like by myself – there’s nobody there, and the team, like most normal people, they just go right on over to the shortest path to the sideline.

“So, yeah, I’ll get down the hill, but I’ll probably go a little bit more toward the sideline because it really doesn’t make sense to go all the way to the 50 and then go left. At least our guys, they don’t think that makes sense with nothing to run through. So, that’s what we’ll do, and it’ll be fun.”

Clemson takes on Virginia at 8 pm Saturday (ACC Network), and even though there will fewer fans in the stands, it’s another chance to play a night game in Death Valley. The Tigers host Miami a week later (7:30 pm) in what will likely be a matchup of top-10 teams.

“It’s going to be awesome,” Swinney said. “Sounds like we’re going to probably have a few of those night games along the way. But I’m just excited to have any game, regardless of what (time). They can tell us we play at 10 o’clock in the morning and I’d be just as excited. But it’ll be cool. It’ll be nice. It’ll be a great atmosphere, primetime, all those type of things. Whatever juice our fans can bring, I know it will be in the stands, that’s for sure, and a lot of excitement.

“So, it will be fun, will be fun to look forward to it. We’ve had one night game already up at Wake, but there wasn’t anybody there. So, this will be a little different atmosphere for us, and in this climate and in this world that we’re operating in, it will probably be as good as you can expect. So, that will be fun for our guys.”