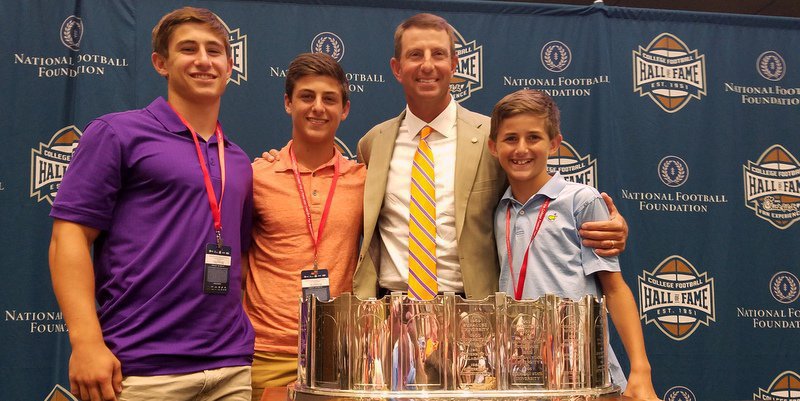 That’s the word that defines Clemson football during Dabo Swinney’s time as the Tigers’ head coach.

It’s the key to the team’s championship success.

It led to ACC titles and a national title last year. It led the team to transition from Tajh Boyd to Deshaun Watson without missing a beat, and the program got even better, actually.

And there’s a good chance it will lead to Clemson continuing to win at a high level even without Watson, the best player in the history of the program.

Swinney talked about the importance of consistent focus and consistent effort this week as the team prepared for its season opener against Kent State. Yes, the 2017 season will be played. Clemson football doesn’t end with the 2016 championship season.

That dialed-in focus has led the program to unprecedented consistent success during Swinney’s tenure. After a nine-win season to open his tenure (as the full-time head coach, anyway) in 2009, there was a dip to six wins in 2010.

But the focus on the day and task at hand – and not looking ahead – quickly turned things around. And Clemson has reached at least 10 wins for the past six seasons.

“These guys, they know exactly what it takes, and they’re excited to play,” Swinney said. “It don’t matter who we’re playing. We could be playing Alabama or Kent State; our guys are excited to go play. It’s time to play a game, and we don’t get caught up in that. If you do, you become very inconsistent.

“If you’re looking ahead … it only takes one good punch to knock you out. You’re in trouble. All of the sudden, you go out there and turn it over a few times, this and that; this game I’ve seen it many, many times. There’s no question the reason that we’ve been so consistent is the buy-in of the guys.”

It’s ironic that consistency is the key to Swinney’s program considering the inconsistency that plagued the program when Tommy Bowden was the head coach. And what makes it even more ironic is that Swinney was part of that staff. It’s not like he was brought in from the outside to fix the things that ailed the program during the Bowden years.

Nope, Swinney saw the issues from the inside and has been able to get them corrected.

“And again, when you only get 12 guaranteed days out of 365, it’s important, and you want to play well. You want to put your best foot forward every time.”

More times than not – and by a large margin – Clemson has done just that under Swinney.