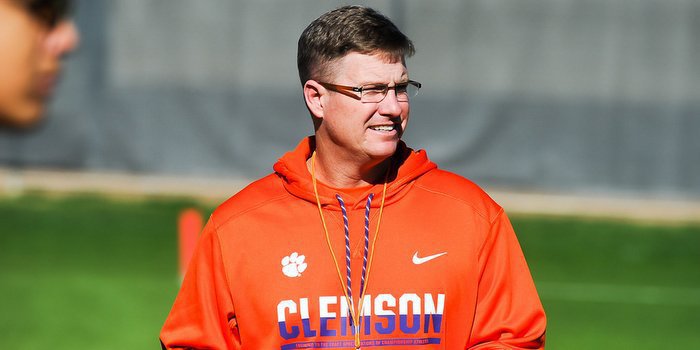 CLEMSON – The news that TigerNet brought you last Saturday has been confirmed: Mickey Conn has joined the Clemson football staff as one of the nine full-time assistant position coaches.

Conn takes the place of defensive tackles coach Dan Brooks, who announced his retirement last Saturday. Conn won’t coach the defensive line, however, and instead will concentrate on the cornerbacks. Defensive backs coach Mike Reed will coach the safeties.

TigerNet first reported last Saturday that Conn would be the likely choice to take Brooks' spot on the coaching staff.

Conn, a former teammate of head coach Dabo Swinney, played defensive back at Alabama and later started the Loganville (GA) Grayson High School program. The only football coach in the history of Grayson prior to this season, Conn had a career coaching record of 137-48 and led Grayson to a state championship in 2011.

Swinney hired Conn last March to become the defensive analyst, and Conn told TigerNet before the Fiesta Bowl that he has spent the last 10 months trying to learn as much as he can as quickly as he can under the tutelage of Brent Venables and the other defensive coaches.

If that happens – which could be in the spring – Swinney could move another staffer (like analyst Lemansky Hall, who has spent time with Brooks this season) into the tackles spot.

The news broke earlier Tuesday that defensive ends coach Marion Hobby was interested in a position with the Jacksonville Jaguars of the NFL. His status won’t affect Conn’s new status as corners coach (Conn was recruiting Tuesday).

Conn told TigerNet last spring that he wanted to help Swinney win a national title, something he accomplished as a defensive analyst.

As a defensive analyst, Conn had different duties.

“He's (Swinney) created a job called the senior defensive assistant and I'll be working directly with the defensive staff,” Conn said last spring. “I'm not allowed to coach the players on the field, but I can help with the coaches, the game plan, the film work, things of that nature and give input. I can be another set of eyes to help Coach Swinney. No coaching the players. After 18 years that will be different. I will help the coaches. I can be on the sidelines and I can be at practices. I can be in the box and I can do all of that stuff to help the coaches, I just can't directly go to a player and say, 'Hey, you can do this' or 'You have to get into your backpedal.' I can't go off campus in recruiting. And when the coaches go out on the road I will be here controlling the defensive room and helping with the players and keeping the players accountable while I am on campus.”