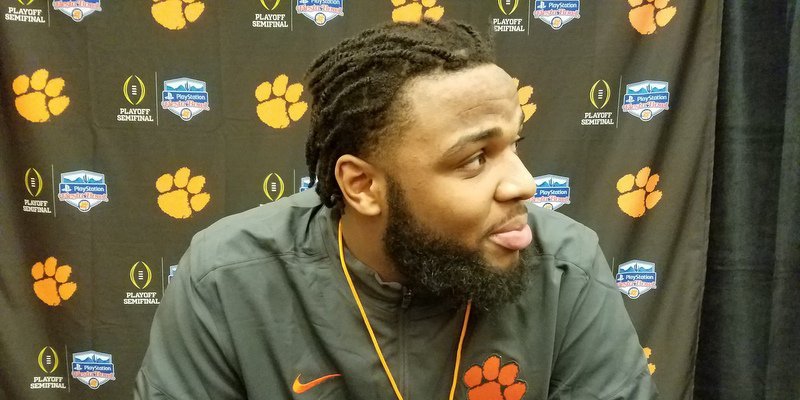 The biggest topic of conversation?

While Venables- aka Jimmy Greenbeans – has played the role of scout team quarterback for much of the season, he turned the reigns over to Boyd last week to give the Tigers’ defense a little better look at what they’ll be facing Saturday night.

Venables told the media that Boyd didn’t need to do any preparation ahead of time because he still has all of the tools necessary.

“He didn't need to. He can read a card. He's been there, done that. A lot of these offenses,” Venables said. “I say it with all due respect, they're all pretty much the same. They have the RPOs (run-pass options). And you've got a lot of fly-by action and a lot of eye candy and a downhill run game that's going to and once that's established, he'll (Barrett) attack you on the outside and so forth. And moving the pocket and those kinds of things. So Tajh was a great look for us, great advantage, I would think.”

Venables said Boyd gave the defense the look and the challenge it needed.

“He was okay. He was okay and really -- he was terrific,” Venables said. “Again, quick release. Knows where he wants to throw with the ball. Good physical presence and running the quarterback powers and the read into the play and counters and draws and things of that nature. So it was an unbelievable look.”

Linebacker Ben Boulware said that having Boyd at the helm helped bring a game-type atmosphere to practice.

“Jimmy Greenbeans is as solid a quarterback as there is, but having a Clemson Hall of Fame quarterback like Tajh out there makes it even more game like,” Boulware said. “He’s a lot like J.T. and can throw it around the field.”

Other notes and quotes

*Carlos Watkins said if he wasn’t playing defensive tackle, he feels like he could play tight end and went as far as comparing him to future Hall of Famer Rob Gronkowski

“I was a receiver in high school. My dad was a receiver growing up and he was the receiver’s coach for my high school team,” Watkins said. “I guess I was naturally born with some skills and whatnot. A lot of times my coach would put me out there, especially, if we needed a first down. I’d just position myself and catch the ball. I was like a big Gronk (Patriots’ tight end Rob Gronkowski) in high school. That’s who I compare myself too. I was like 275-pounds in high school. I really feel like if you throw me the ball I can catch it. I always thought I could play tight end in college.”

“Absolutely. I know wherever we go, Mexico, across the world, Clemson fans will be there, and they'll be there deep,” Boulware said. “So, Arizona is a small trip for a lot of those guys. So I definitely am expecting a big crowd.”

*Boulware broke down the growing of his iconic beard.

“It's a lifestyle beard. It doesn't change. I had the mustache. I don't know why. And I shaved the mustache the day after the National Championship. And I had a clean slate. It's been growing ever since,” Boulware said. “Patience. You've got to go through a lot of ugly phases. You've got to be a man. But to fight it off and resist the razor. That's about it. It's definitely not a playoff beard. This has been here since January 12th and it's December 27th. So that's a long time.”

*Senior defensive back Cordrea Tankersley said that despite the outcome of last year’s national championship game, he was anxious to get back out to Arizona.

“I love it out here. It's absolutely beautiful. Like you said we left with a bad taste in our mouth but that was last year. It's a new year,” Tankersley said. “We want to come out and finish the right way. We kind of limped to the line last year. So we just want to like sprint to the line, finish the right way, have no regrets. To have some time out here, out west, away from Clemson, I think it will be good for us.”

*Watkins detailed the Power Rangers group that the defensive line has formed.

“He (Christian Wilkins) is the real reason that we got into the Power Ranger deal,” Watkins said. “He thought he was a Power Ranger when he first got here. It kind of rubbed off on us. And he thought it would be a good idea if the "D" line if we all became the Rangers, what not. But, yeah, it was his idea.

“I'm Mastodon. I'm the black Ranger. I can say it fits me. I kind of watched a couple of videos on YouTube to get a feel for it. I kind of like it now. It grew on me.”