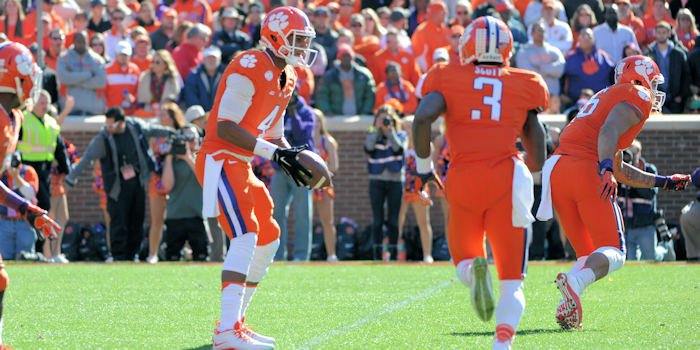 Clemson running the jet sweep against South Carolina in 2014.

CLEMSON – The play is one that Clemson fans have grown accustomed to. Quarterback Deshaun Watson stands in the shotgun formation and barks a signal as a wide receiver comes in motion. Watson calls for the snap just before the receiver gets to him and the crowd crackles with anticipation.

Whatever you want to call it, it’s been successful at Clemson over the last few seasons.

Once the ball is snapped to Watson, he pitches it forward to the receiver, who takes off around the line of scrimmage and hopefully upfield. The beauty of it, however, is that if the ball is dropped on the pitch it’s not a fumble, it’s merely an incomplete pass because it was pitched forward.

Clemson got a first-hand look at the play during the Orange Bowl loss to West Virginia – Mountaineer head coach Dana Holgorsen used it to perfection against Kevin Steele’s defense as Tavon Austin tortured the Tigers for four touchdowns on the play. Holgorsen had learned the play from Bob Stitt, who was the head coach at the Colorado School of Mines and now is the head coach at the University of Montana.

The Clemson coaches visited Oklahoma St. and head coach Mike Gundy shortly after the Orange Bowl and learned that Gundy runs a version of the play. They took note and notice.

“One of the off-seasons we went to Oklahoma State and met with them as part of our regular spring visits,” co-offensive coordinator Jeff Scott said. “As we were meeting with them, they were one of the teams that pitched the ball, so we were talking to them about the positives and negatives of why they would pitch it instead of handing it off. From that point, the biggest thing for us was that a lot of different skill guys that were coming across, so when you pitch it, if the guy drops it, it's just an incomplete pass.

“Whereas if a guy comes and you hand it off to him, each of those skill guys has a different pocket - that's not their normal fundamentals that they normally do - so there is a lot more opportunity for the ball to end up on the ground. By pitching it, it saves all of that, so that was the biggest benefit that we saw from it. We didn't know how we'd like it, so we tried it during spring ball, gave it a week or two, but they figured it out day one and liked it.”

New offensive coordinator Chad Morris installed the fly sweep when he arrived on campus in 2011 – the year of the Orange Bowl – but 2012 saw the change from the handoff to the pitch.

“We did that year one, under Coach Morris in 2011,” Scott said. “We brought the fly sweep, we just handed it off and then the big change was in 2012 when we started pitching. We started doing the pitch, and we really liked it.”

Artavis Scott makes the sweep a thing of beauty.

“What you’re looking for is a skill set in that position is a guy that is playing receiver, but when he gets the ball in his hand he's like a running back,” Scott said. “It creates issues for the defense, and it's been a successful play for us. It's a way to guarantee to get the ball in one of your playmakers hands. That's what we always talk about - guaranteed touches. “

Watson gets passing yards on the play – a simple one-foot pitch can turn into a 78-yard completion and a touchdown pass – but the Tigers consider it a part of the running game.

“It is an extension of the run game. The stats can skew it more than the other, but when you look at it fundamentally, it's an outside run,” Scott said. “We put it in the category of our outside runs - stretch zone, the buck sweep and then the speed sweep. I think the quarterback likes some of those passing yards, too.”