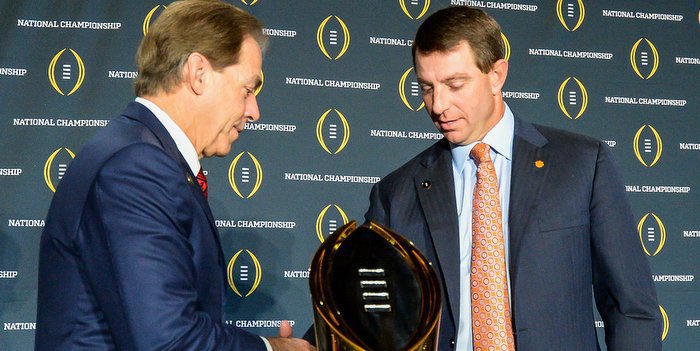 If Swinney can get Malik Herring to sign on the dotted line, Clemson's 2017 class will soar

In case anybody needed further proof that Dabo Swinney has his program competing at an elite level right now – and getting better with each passing day – all you have to do is look at the preseason magazines and pay attention to recruiting.

The colonists held the original Tea Party in Boston Harbor in December of 1773, a protest against British Parliament’s Tea Act of 1773, a bill designed to save the faltering East India Company by greatly lowering its tea tax and granting it a virtual monopoly on the American tea trade.

Clemson celebrated Independence Day with a Tee Party of its own, marking the occasion with Tee Higgins’ video production stating that he was committing to Clemson. One of the nation’s top receivers for the 2017 recruiting cycle – and one many consider to be the best – keeps the momentum rolling for Swinney and his coaching staff.

An appearance in the College Football Playoff last season and expectations that this team will make another run at a title this season have created a buzz around Clemson that hasn’t been seen in, well, maybe ever. Add in the top-notch recruiting and the addition of the new football operations center, and Clemson is one of the “it” schools in the nation. They’re winning games. They’ve got the facilities. They’ve got one of the nation’s best coaching staffs and they’re recruiting at a high level.

In recent years, Clemson was happy to make a splash with one of the nation’s top prospects to put the proverbial icing on the recruiting cake. They would sneak in and steal a major recruit from one of the big boys and be happy. Now, the Tigers are going after all of the region’s best players – and going head-to-head with Alabama and Florida St. and Ohio St. – and winning those battles. 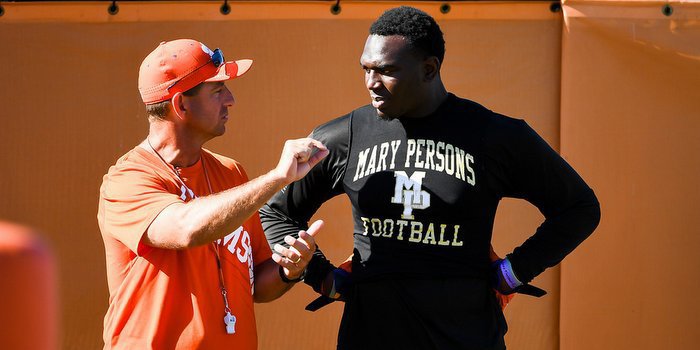 If Swinney can get Malik Herring to sign on the dotted line, Clemson's 2017 class will soar "

I attended one of the Nike Combine’s recently, and I wrote about a conversation I had with a high school coach from one of the big schools in Georgia. He asked who I covered, and when I told him, he broke into a big smile. He then told me what I already knew, but it was interesting to hear it from someone who has no connections to the Clemson program.

He said that in the past the Clemson coaches were known for “swooping in” and grabbing a truly great prospect once in a recruiting cycle, beating out a Florida St. or an LSU for the prospect. These days, however, the Tigers are one of those top programs that everybody else is chasing. He then said something that resonated – he said all of the high school coaches now know that Clemson is able to pick and choose their players – the coaches don’t have to cast a very wide net to put together a stellar recruiting class. He said that Clemson goes into a cycle and identifies a certain number of players that they think fit the system and the profile of a Clemson player and recruit those players. And right now, they’re winning those battles.

Now let’s take it a step further. Clemson has been known to reach into Florida, Georgia and North Carolina for those state’s top prospects. However, the state of Tennessee is producing top talent for this cycle, and the Tigers have reached into the Volunteer State to take away three of that state’s top seven players. This is happening while University of Tennessee head coach Butch Jones is leading what he hopes to be a resurgence of Tennessee football.

For even further proof – Nike is hosting The Opening this week in Eugene, Oregon. Many of the nation’s best players – 166 of them – will descend on Nike’s world headquarters to compete, and it’s easy to guess that as many as 20 credible Clemson targets or commitments will be on hand, easily the largest number I can remember.

This won’t be a large recruiting class, but Rivals already has Clemson’s 2017 recruiting class ranked at No. 9 even though they have just 11 committed prospects. Add in potential targets like defensive end Malik Herring, oversign running back D’Andre Swift, defensive end Jordan Williams, Trey Smith, and maybe cornerback Jamyest Williams and this class will once again be among the nation’s best.

It isn’t part of my job to pay attention to message boards – for the most part it’s a useless exercise for someone who has to cover a program – but someone sent me a text yesterday with a link to a rival message board, and I thought it was hilarious. The poster surmised that Dabo had better stop stepping into big boy territory and recruiting against the big boys or he was going to get squashed.

Even accounting for the usual fan delusion, this post takes the cake for idiocy. While this person has almost certainly been asleep since 2001, Clemson has ascended into the ranks of the nation’s elite. And they aren’t going anywhere. Dabo Swinney is making sure of that.