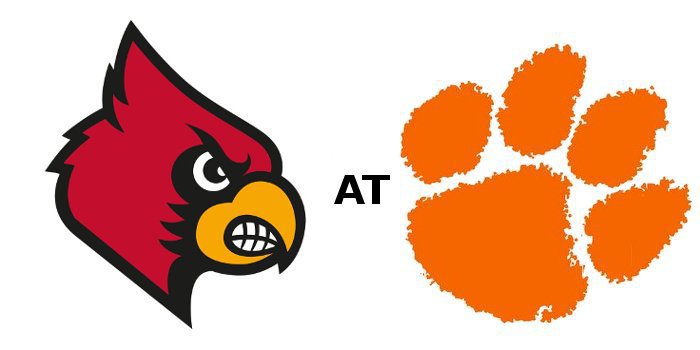 Clemson and Louisville kick off at 8:22 pm

Could it get any better?

Saturday night’s game is a battle for Atlantic Division supremacy, a shot at an ACC title and maybe even a shot at the College Football Playoff. This one should be fun.

This is just the second matchup of top five teams in the history of Memorial Stadium. The facility was built for the beginning of the 1942 season. The only other time it has happened was in 2013 when Florida State came to Clemson. The Seminoles were ranked third by AP and fourth by the Coaches poll, while Clemson was fifth in both polls. Florida State, who went on to win the National Championship that year, won 51-14. While this is just the second top five matchup in the history of Memorial Stadium, it is the fifth meeting of top 12 teams in Memorial Stadium in the last five years. Clemson has won two of the previous four, a win over Georgia in 2013 and the win over Notre Dame last year.

Clemson Athletic Trainer Danny Poole will work his 400th Clemson football game on Saturday. He came to Clemson before the start of the 1983 season, and his first game was against Western Carolina as an assistant athletic trainer under Fred Hoover. Two weeks ago, Clemson defensive line coach Dan Brooks worked his 400th game as an FBS assistant coach in his career at Florida, North Carolina, Tennessee, and Clemson. Poole was a student trainer at Western Carolina was finishing up with the Catamounts as a player. Not only will it be Poole’s 400th game at Clemson it is his 400th consecutive game.

Clemson enters the Louisville game having won 18 consecutive regular season games. Clemson won its last two regular season games of 2014, all 12 games of 2015, and the first four games this year. Dabo Swinney and the Tigers have actually won 21 straight non-National Championship games. Clemson is 21-1 over the last 22 games overall with the only loss coming the Alabama in the National Championship game last year.

The Tigers have won 18 straight home games, a school record. The last loss at home was to third-ranked Florida State on October 19, 2013. Clemson’s home winning streak is the second-best active streak in FBS. Florida State has won 22 in a row at home.

Louisville quarterback Lamar Jackson has been the best player in college football the first four weeks of 2016. The sophomore signal-caller accounted for seven touchdowns in leading the Cardinals to a 59-28 win over Marshall last week, and he passed for 417 yards (with five touchdowns) and another 62 yards on the ground (with two more touchdowns).

Jackson has 1,301 passing yards (13 touchdown passes) and 510 rushing yards (12 touchdowns) this season, and he's played in only 11 quarters. His 25 touchdowns are more than any FBS player has had through four games since at least 2000, per ESPN, and he's on pace to score 75 touchdowns in the regular season. His completion percentage is decent at 58.7 percent, and he’s thrown three interceptions in 126 attempts. He has a group of tall, athletic receivers that includes James Quick and Jaylen Smith and Jamari Staples and a threat in tight end Cole Hikutini.

Did we mention he can run? Jackson leads the team with 526 rushing yards and has scored 12 times on 61 carries. He’s averaging 8.6 yards per carry and over 100 yards per game on the ground. So what do you do against his threat? I’ve been surprised that teams have played so much man coverage against Jackson and the Cards, leaving the outside open to his run threat if the receivers take the defensive backs down the field. I asked Venables about that earlier this week, and he smiled and said he wasn’t there to judge someone else. Could the Tigers make Jackson read the defense, play more zone and make him win through the air? My guess is Venables will let his tackles push the pocket and then contain Jackson from the outside in.

No matter what happens, however, this is a great matchup. Clemson is third in total defense, and they have big defensive ends in Clelin Ferrell and Christian Wilkins who can not only push the pocket, they are fast enough to play contain when needed. Louisville’s offense is REALLY good. Clemson’s defense is REALLY good. ADVANTAGE: EVEN

Fans are grumbling about Clemson’s offense not being as good as last season, but the numbers are eerily similar to the start of last season. Also forgotten in the griping is that the offense has been spectacular in the first half the last two weeks. The first half against Georgia Tech was a thing of beauty, and then the Tigers simply ran out the clock in the fourth quarter. When they’ve needed to be good the last two weeks, they’ve been really, really good.

Louisville has a bevy of good players who have played a lot of football under defensive coordinator Todd Grantham. They include defensive back Josh Harvey-Clemons (29 tackles), linebacker Keith Kelsey (27 tackles), linebacker Stacy Thomas (20 tackles) and Devonte Fields (20 tackles). Grantham has stymied Clemson’s offense the last two seasons, but….Watson was hurt early in the first game, and the Tigers weren’t using Watson as a run threat early last season as he tried to find his groove coming back from a torn knee ligament.

But, Watson hasn’t really been a threat to run this season, and running back Wayne Gallman is averaging a yard less per carry than he did a year ago. Can the offensive line open enough holes to free Gallman, who closed out last season’s game against Louisville with 129 tough yards? I am not sure, not unless Watson becomes the threat we know he can be. If Watson isn’t loosening up the defense with the run game, Grantham will force Watson and Clemson’s receivers to win the game, and that means making catches in the red zone and catching sure touchdown passes instead of dropping them. Like last season, I like tight end Jordan Leggett in the middle of the field.

Clemson’s Ray-Ray McCloud (18.78 yards per return) and Louisville’s Jaire Alexander (17.33) are among the national leaders in punt returns. McCloud would have a touchdown if he hadn’t dropped the ball before crossing the goal line against Troy. Louisville punter Mason King (13 punts) is decent, while Clemson’s Andy Teasdall has been better the last two weeks. Louisville has two players who have kicked off this season, but they have just four touchbacks in 42 attempts. Could this be the week Clemson gets loose (I see you Tavien Feaster) and returns one for a touchdown? Clemson is second nationally in kickoff coverage this season. As for field goals, Louisville has made just three of six.

Louisville is the nation’s hottest team and worthy of all the hype they’ve received. But who do you trust? The team that’s beaten four opponents – three of them vastly inferior – or the team that’s won 18 in a row at home and has experience in the big games? This one will see its share of points and Jackson will make some big plays, but Venables and the Clemson defense will do enough to keep this one from getting out of hand. And, believe it or not, Clemson has the advantage in special teams. Add in a night crowd at Death Valley and the fact that Deshaun Watson wants to prove he’s the nation’s best quarterback, there are a lot of intangibles that fall Clemson’s way. It’s a thriller, but…