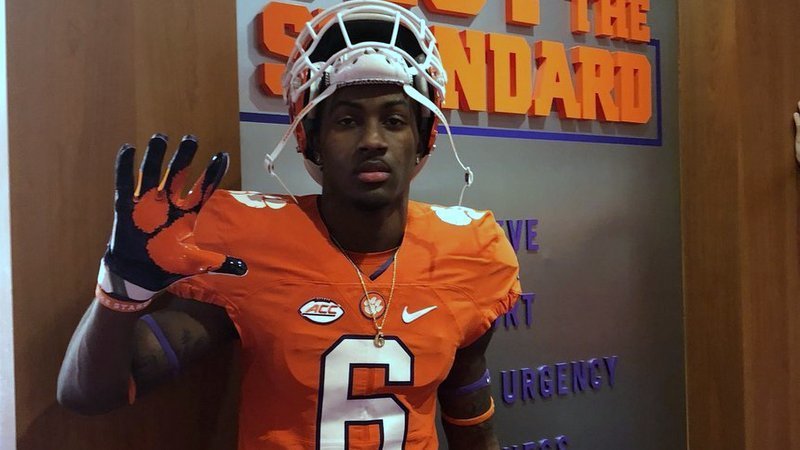 Jones shows off the Clemson uniform during his visit

It’s been a busy couple weeks for Sheridan Jones.

The four-star cornerback out of Bishop Sullivan Catholic (Virginia Beach, Va.) announced a move from the 2020 class to 2019 on Jan. 11. That opened up for further communication within NCAA rules and Jones called the recruiting process "different" now, hearing from some schools “out of nowhere.”

While Clemson offered on the day of his decision, Jones is no stranger to the program, with a relationship established from his freshman season-on that laid the groundwork for a productive Junior Day visit over the weekend.

“They’ve (Clemson coaches) come to our pro days,” Jones said, “and they’ve been telling me that they are watching me … as soon as I announced that I am a junior - they said that I jumped ahead of a lot of guys.”

A Maxpreps All-American both as a freshman and a sophomore, Jones was rated as the No. 1 cornerback in the 2020 class previously. Not re-ranked by all recruiting services yet, he is listed as the No. 7 corner nationally by the 247Sports Composite for 2019.

He also holds offers from Alabama, Penn State and West Virginia, where he has visited as well, in addition to Ohio State and a number of Power 5 programs around the Southeast.

What Jones saw on his Clemson visit Saturday matched-up and more with what he and his family are looking for in a school. He emphasizes a path to pros as well as strong academics and a family atmosphere.

After talking with Tigers head coach Dabo Swinney, as well as recruiter and defensive coordinator Brent Venables, Clemson is a place Jones can see himself playing.

“I knew that Clemson was a top-tier football team,” Jones said, “but meeting coach Swinney and seeing his perspective on things, it changed my mind about a couple things. He’s really all about his players and he wanted to make sure they were good people before they were good football players.

“It’s really good that he cares about his players as people and how open he is to everyone.”

Jones was wowed by the football facilities Saturday, particularly the Memorial Stadium field and locker room.

The playmaking defender was able to catch up with fellow Hampton Roads product Jordan Williams, a redshirt freshman defensive lineman. Williams has talked Clemson roster numbers among more subjects with Jones, where cornerback is a priority for 2019.

“He told me Clemson was a great school and the football program is on top,” Jones said. “And how they’re not going anywhere and they’re going to keep pounding everybody and keep striving to get to the top. And make sure they get back to the national championship.”

Jones says he will likely put together a top schools list in the spring or summer and take official visits after football season.

Stacking up against a new group of prospects now from 2019, he says it lines up with his mentality.

"I know I want to still make sure I’m the best of the best.”