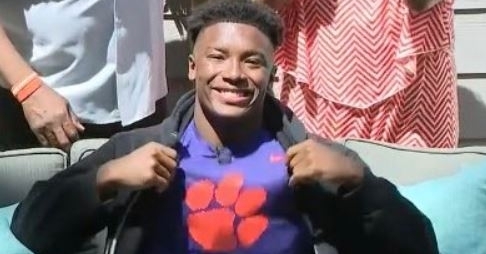 Clemson continues to recruit at an extremely high level.

Tuesday evening, 4-star linebacker Barrett Carter announced his decision to commit to Clemson over top four finalists Ohio State, Auburn, and Georgia. Carter announced his decision on FOX 5 Atlanta. He wore a sweatshirt that he unzipped to reveal a dark Clemson shirt with the iconic orange Tiger paw in the middle, saying that he would further his education in the Upstate.

"I could visit Clemson a million times and I would have butterflies before every visit," Carter said. "The coaching stability, how they produce talent, and how they graduate players... that all spoke volumes to me.”

He then went on to say that there is something special about Tigertown.

"Everyone always tells you there is something in the water at Clemson,” Carter said. “I can see that, I can’t really explain it."

NCAA rules prohibit recruits from visiting college campuses, and Carter said he wanted to take his visits. However, he knew that Clemson was where he wanted to be.

“I really wanted to take my officials, but I just I couldn't wait any longer I was ready," Carter continued. "Clemson, there's such a great balance of academics and sport so, it's a school that can balance both of those. And I cannot find that. That's kind of the school that I want to be with."

Clemson defensive coordinator Brent Venables likes how North Gwinnett uses Carter all over the field, and compared it to another linebacker who was recently selected with the No. 8 overall pick in the recent NFL Draft – Clemson’s Isaiah Simmons.

“I am not 6-4, I am just 6-1, but I am a shorter version of Isaiah because of how versatile and athletic I am. That is a huge compliment to me,” Carter said. “I would say that I am very versatile. I can cover anybody on the field. I can also play in the box. I am sideline to sideline and I am pretty fast. I can cover a lot of ground and make plays all over. My versatility is what sets me apart. I can make plays all over the field. It's my dream to play in the NFL, so to see how he develops linebackers speaks volumes to me.”

“I am very comfortable with Clemson and the city. I felt at home at Clemson,” Carter said. “It's a great environment there. The coaching staff is so welcoming. I love how Coach Swinney is very Christ-based. That sticks out about a coach.”

Despite the travel restrictions, Clemson is having a stellar month of May. The Tigers have added 5-star running back Will Shipley and Carter. That gives Clemson 11 total commitments for the 2021 class and moving their team ranking to third nationally, and first in the ACC.

life is a gamble, don’t be scared to take that risk..

Happy Birthday Mom, this one is for my family. ??

#Clemson adds Top247 LB Barrett Carter to the No. 1 recruiting class in America when looking at @247Sports Composite Average Ranking Per commit. The North Gwinnett (Ga.) standout is in the discussion as the nation's top LB himself too: https://t.co/Jg5Y5wPI7B https://t.co/OHrlMt3qHE

The Tigers signed one of Ga.'s top 2 recruits each of the previous 4 years and a top-3 through 2016, with Mitch Hyatt (5) breaking the streak to Deshaun Watson in '14.

A HUGE key to their success. pic.twitter.com/qn5Jiqk7wq

4-star LB commit Barrett Carter (@bcsznn) modeled a No. 1 jersey during his visit, the same number he wore in high school ????

Now, he’s made his decision. Welcome to the #ClemsonFamily! #ALLIN pic.twitter.com/lD8Hwu89ur

#Clemson gets a commitment from ESPN 300 linebacker Barrett Carter.

His commitment gives the Tigers 10 ESPN 300 commitments in the class, 9 of which are in the top 150 and 7 are ranked in the top 10 at their respective positions. pic.twitter.com/z9OeLlnDEl

I've been covering new #Clemson commit Barrett Carter for a couple of years, and for me, he's a combination of 2 other linebackers I got very familiar with. #ALLIN