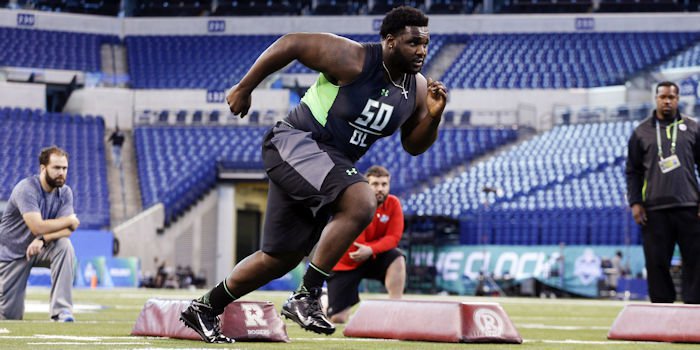 Mackensie Alexander didn’t take part in the drills at the NFL Scouting Combine, but he showed his confidence.

Kevin Dodd participated in only one drill before coming up with an injury, but he did well enough to not hurt his draft status.

Shaq Lawson and T.J. Green stood out, and the other Tigers who competed had their moments, too.

“I can bring a lot of different moves to the pass rush,” Lawson said during his news conference at the combine. “People say I’m mostly a power guy. I don’t see myself as a power guy. I can spin, beat you off the edge, run past you and everything.”

Alexander, who is still recovering from a hamstring injury suffered last month in the national championship game, said he believes he is the best cornerback in this draft, even though he didn’t have an interception in his two years with Clemson.

“I had some opportunities to come up with some picks in my career. I didn't come up with them at the end of the day. I'm taking it like a man. In a lot of my situations, I wasn't challenged very much,” Alexander said on NFL.com. “A lot of quarterbacks on teams stayed away from me, and that was their game plan, really. That's it, really. That's how I answer that.

“I'm 22, but I'm ready to compete with anybody. There's nobody more dedicated than me, who's put more time in or is more of a competitor than me. ... I'm here prepared. I'm telling you I'm the best corner in this draft class.”

NFL.COM BOTTOM LINE: The arrow is pointed up for Dodd who finished the season with a streak of five consecutive games with a sack. Dodd already looks the part of an NFL defensive end and his desire to make plays coupled with his physical traits and talent should have him shooting up draft boards. His lack of college snaps could preclude him from being "pro ready," but his instincts and football intelligence should expedite the learning process.

NFL.COM BOTTOM LINE: Odds are that Kearse will test well and with his length and ability, he very well may go much higher than the grade I have on him. To play safety, there needs to be a sense of urgency and consistency because that position is the last line of defense and Kearse doesn?t show those traits nearly enough at this time. If the light comes on and he gets more dog in him, then we are talking about a substantially better NFL player.

NFL.COM BOTTOM LINE: Physical, two-day linebacker with the desire to scrape downhill and strike what he sees. Goodson's lack of pursuit speed and overall athleticism could be troubling to teams, but his toughness and consistency of effort will appeal to teams who value force in the middle. Goodson could figure on the third day of the draft as a backup with eventual starter potential.

NFL.COM BOTTOM LINE: Height/weight/speed prospect who appears to be heating up around draft circles. With just one year of full-time starting experience and so much dead tape due to deep coverage responsibilities, teams will have a limited sample size to operate from, but traits usually win out. If Green hits a fast 40 at the combine (as expected), his stock will get a bump. Green's coverage potential is evident, but he might need time on the bench to watch and learn early on.

This CB group is SPEEDY!

NFL.COM BOTTOM LINE: Productive backup for two years before putting together an All-American season in his first year as a full-time starter. Lawson is built like a full-grown man and combines his instincts, toughness and power to fill up a stat sheet and set an early tone. Lawson's frame and game are easily translatable to the NFL, but his average athleticism and pass rush skills will likely have teams viewing him as a 3-4 edge setter or a 4-3 base end. Lawson may also have value as 3-4 defensive tackle in an upfield scheme.

NFL.COM BOTTOM LINE: Rare combination of size and speed that can often be found in number one wide receivers. Peake was highly regarded coming out of high school but failed to post eye-popping production thanks, in part, to two knee injuries. While his small hands are a concern, his athleticism and ability to operate on all levels of the field warrant consideration inside the first three rounds if his medicals check out.

NFL.COM BOTTOM LINE: Squatty, strong nose tackle who is able to push smaller centers around in phone booth battles, but unable to consistently be a disruptive force up front. Reader has the strength and potential to believe that his Senior Bowl flashes could turn into something more in the NFL, even though that might just be as a career backup.