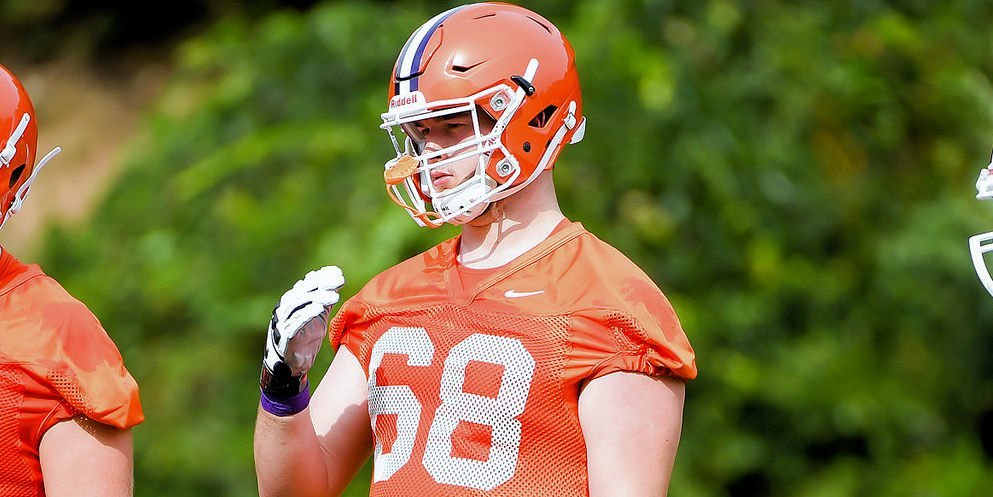 DeHond is confident he will play again

CLEMSON – Noah DeHond has endured surgery and the Frankenstein jokes, and he’s watched as his team celebrated another National Championship. Now he’s ready to get back out on the field.

The redshirt freshman offensive lineman out of Rochester (NY) exited fall camp feeling like he’d earned a spot in the offensive line rotation, but an issue with the nerves in his neck kept him off the playing field and eventually led to surgery.

“It was basically just a buildup of bone spurs in my neck, kind of where the nerve came out. It got to the point where every time I would get hit or try and block someone, I would lose feeling in my arm,” DeHond told TigerNet. “It got so bad I would rotate my neck and get a burning sensation down my arm. If I had kept getting hit I would risk getting nerve damage, so I went to see (trainer) Danny (Poole), and we hoped it would heal on its own.

“It didn't, so that is when we made the call about surgery. We got that taken care of, and rehab is going slower than I want it to, but it's getting there. I am hopeful of getting back before spring ball. If not, I will be back by summer.”

DeHond didn’t take any snaps this season – the injury was too severe – and he had the surgery on Halloween.

“I missed Halloween, which was kind of unfortunate, but I did get a lot of Frankenstein jokes,” the 6-6, 310-pounder said.

DeHond has been attacking his rehab with an aggressive mindset.

“Coach (Paul) Hogan and I have been doing a lot. I got cleared a few weeks ago, so I have been doing some running and light lifting,” he said. “I am around the guys all the time anyway, so it's easy to stay involved. I am looking at tape here and there and trying to stay sharp with the offense so I don't lose any of that knowledge.

“It's been tough. Because I was really ready to get out there. I thought I had a great fall camp and I was starting to hit my stride as far as where I wanted to be as a redshirt freshman and get that experience. I knew Mitch was leaving and I wanted to take a shot at that role next year, so it's been tough. But I have been doing everything I can to make myself a better player and learn from this experience and grow so I can get back out there and give it my all.”

“He's just a redshirt freshman, and he's got a lot of football down the road," Swinney said. "Hopefully - and I guess with the new rule, he can get this year back...He's a guy has a lot of football in front of him. I was looking forward to getting some experience for him this year. He's a mountain of a man. We've got to get him healthy."

Nerve surgery is risky, and results aren’t always guaranteed, but DeHond is confident he will back out on the field next fall.