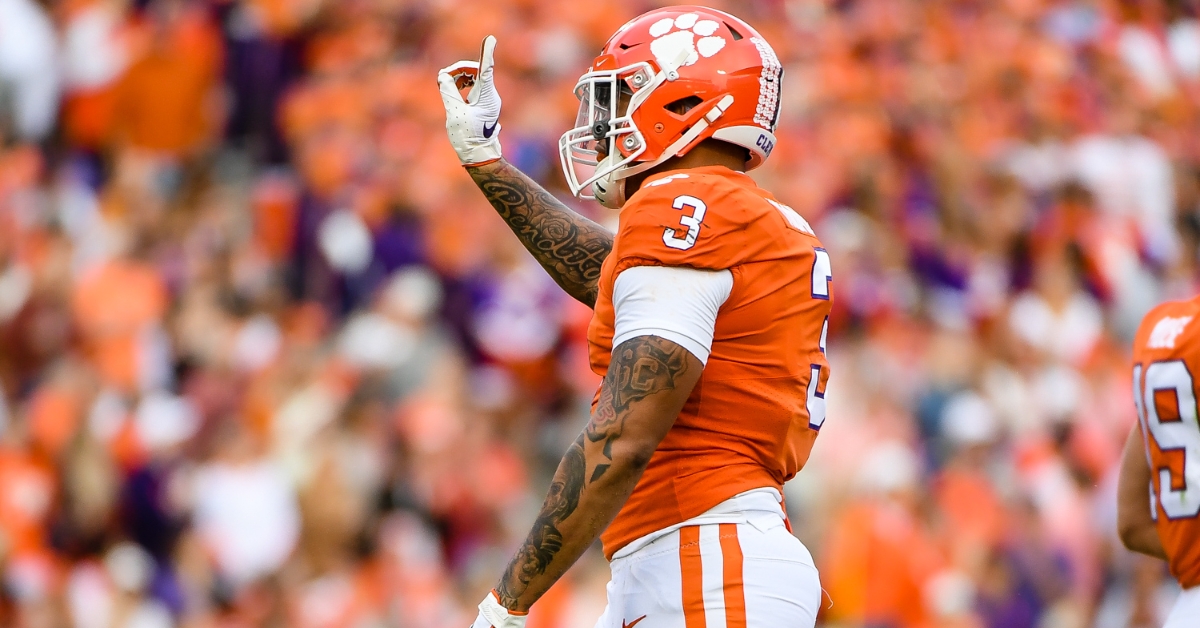 Travis Etienne and Clemson return to action Saturday and look to pick up from where they left off against Wake Forest.

Tuesday’s latest College Football Playoff ranking marked a move past the halfway point in the committee’s polling and Clemson maintained its No. 3 spot.

Dabo Swinney’s Tigers trail only new No. 1 Ohio State and No. 2 LSU going into a rivalry weekend for teams across the country -- Clemson looking for a second-straight 12-0 start in a noon kickoff at South Carolina on Saturday (ESPN), Ohio State traveling to Michigan (noon, FOX) and LSU hosting Texas A&M (7 p.m./ESPN) before all three participate in conference championship games on Dec. 7.

Elsewhere in the rankings, Virginia Tech joined Clemson in the top-25 from the ACC at No. 24. They take on Virginia at noon on Friday for the right to play in the ACC Championship game next week.

Going into the final two weeks of action, two ESPN Playoff projections continued to paint different pictures ahead of Tuesday’s rankings. FiveThirtyEight gave Clemson the best chance to make the Playoff (89 percent) then Ohio State (78), LSU (70), Georgia (49), Oklahoma (43), Utah (28) and Alabama (13) among those with double-digit projections. The site’s Playoff Predictor is still trending more toward a two-bid SEC with Ohio State leading (95) then Clemson (87), LSU (86), Georgia (50), Alabama (47), Oklahoma (12) and Utah (9). 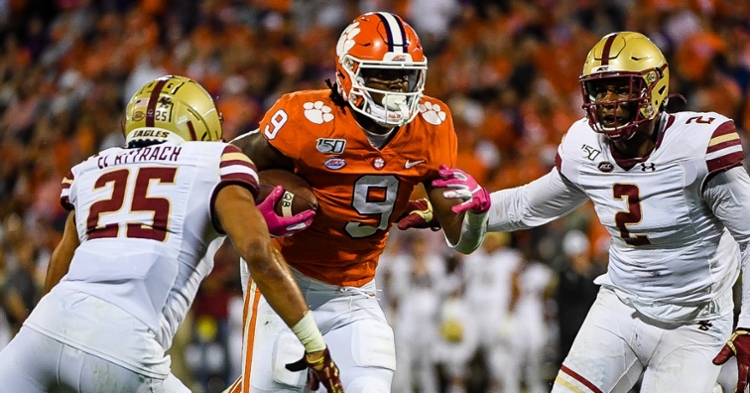 Travis Etienne and Clemson return to action Saturday and look to pick up from where they left off against Wake Forest."

Ohio State, Clemson, Alabama and Utah are the only teams rated with top-10 efficiencies on offense and defense currently (per ESPN SP+/FPI).

Clemson has spent the second-most weeks in the CFP top-5 rankings all-time (28), only trailing Alabama (34) since its 2014 inception. Clemson, Alabama and Ohio State are the only three teams to be in each of the 35 CFP Top 25 rankings.

The Tigers held at No. 3 in both the Coaches and Associated Press polls this week after starting as the preseason No. 1 in each in August.

Clemson is seeking to be only the second team to start outside the top-4 in the first CFP ranking (No. 5) and go on to win the national championship (Ohio State in 2014, No. 16).

This year’s CFP semifinals will be played on Dec. 28 with times to be announced in the Fiesta (Glendale, Az.) and Peach (Atlanta, Ga.) bowls. The National Championship will be held in New Orleans, Louisiana on Jan. 13.