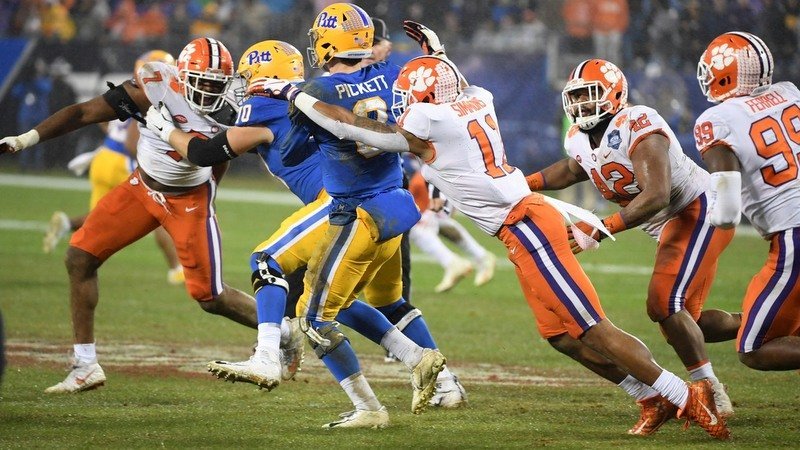 CLEMSON – Isaiah Simmons, Chad Smith, and Jamie Skalski are penciled as the three starters at linebacker for Clemson heading into this week’s start of fall camp, and a trio that defensive coordinator Brent Venables really likes.

Simmons is the most experienced of the group and is poised for an All-American year. He transitioned from safety in 2017 to the starting nickel/sam linebacker position in 2018. He enters 2019 credited with 146 career tackles (12.5 for loss), 2.5 sacks, four forced fumbles and an interception (which he returned 27 yards for a touchdown) in 29 career games (14 starts).

“Isaiah is just now coming into his own,” Venables said. “The best three games of his career were the last three games for us last year and that is what you want to see out of any players, but that isn't always the case. But you saw him kind of a little bit rocky earlier in the year, just playing a new position and learning all the intricacies and you learn through failure. He had plenty of that throughout the year, but really came on and played outstanding against Pittsburgh and Notre Dame and Alabama.”

Venables agrees that Simmons can play even better.

“He's got the ability to play on a whole other level this year and needs to have a great fall camp,” he said. “But he's had a really good spring and a really good summer and is really maturing, too, becoming a leader and understanding that it's tough being a leader. You gotta show up every day and you can't be worried about being a guy's buddy and hurting people's feelings. You gotta stand out there and sometimes it's lonely. But that's part of the gig. I think he really understands what that's all about.”

Skalski was able to redshirt last season but still played in four games under the new NCAA rule that allows a player to play up to four games and not use a year of eligibility. Venables said the rule benefitted both Clemson and Skalski.

“I'm not sure that was fun for him. He'd be the first one to tell you it was good being able to get out there in some critical situations down the stretch,” Venables said. “Particularly, I think there's a play in the Pittsburgh game or a series or two. He got in a little bit later. We manned him up on the slot and on their wide receiver. And I told him before the game, I said, don't worry, I won't put you in that position. Sure enough, he's out there. And I put him in the position and he looks at me and tried to wave me off.

“But I feel strongly about him, too. He has the ability to run and to cover. But it's a great rule. It benefitted him and I think it really gave him a shot in the arm going into winter conditioning and things of that nature. We didn't need him, per se, we had a package for him in the National Championship with some of their personnel groups. But I think it's a great rule for all of the reasons you would expect to help guys retain their eligibility because it is a development game.”

The rule allows players to develop.

“Everybody wants to speed up and get out of college, but in reality, they go to the NFL and take redshirt years because they are not quite ready. It's a man's game,” Venables said. “The best players on the planet are in the NFL. And there is not a lot of patience in the NFL, either. You get in there and you make an impact and you get out. And that's your career. It's very short-lived. You want to go in there and make the biggest impact you can. So developing the right way in college is the right way to go. It's going to really benefit Jamie and us being able to redshirt him a year ago.”