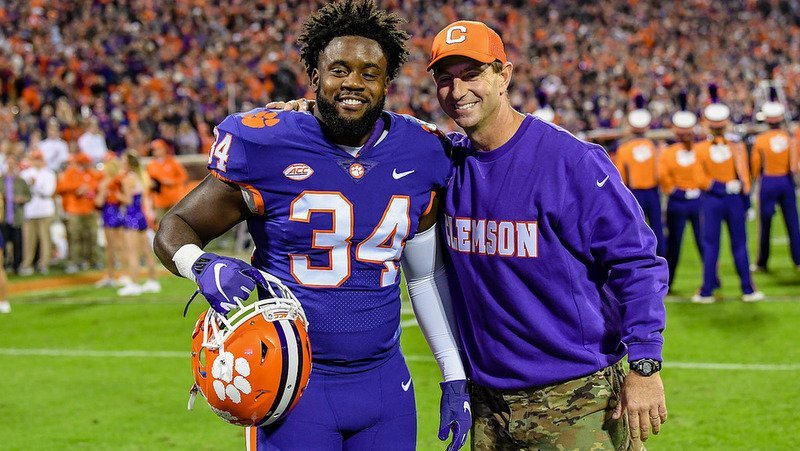 CLEMSON – The sting of last year’s Sugar Bowl loss to Alabama is never far away from Kendall Joseph, and since the Tigers walked off the Superdome field one thing has been on his mind.

He didn’t want to play any other team than Alabama for the National Championship this season.

Alabama pummeled Clemson in the Sugar Bowl last season and then advanced to defeat Georgia for the National Championship. The Sugar Bowl was a game in which Joseph says the Tigers looked like they didn’t belong.

This year is a different story.

“I remember us getting dominated from the very first snap. It looked like we didn't belong out there. Just getting dominated is what I remember,” Joseph said. “I think our focus is different. I think we are more locked into the details and the small things and I think we've proven it all year. I think the hunger to be great is a little bit bigger this year. That comes from the leadership of the team and guys giving it their all and not looking ahead. We are excited.”

Joseph was asked if he thinks the rivalry reminds people of the Cavs-Warriors championship series in the NBA and he said no.

“I think we are different from the Cavs and Warriors. People felt bad for the Cavs every year, and they had a miracle when they were down 3-1,” Joseph said. “I think it is a little more balanced on our side. I don't think you can write it up any better. We say it all the time - we feel like we are living a 30-for-30 and there will one day be some big-time stories on us. This is who we've wanted to play since January and we've earned a spot and we are ready to go play the game.”

He wants to bring a third title home to Clemson.

“We want to win the game and bring it home to Clemson and the Clemson family. It's a pride thing. We are excited,” he said. “That is how we felt. That is how everybody in America has felt because Alabama has played so great. We've been in the shadows all year but I think we are peaking at the right and we are excited about the opportunity. I am telling you, we wouldn't want any other team besides Alabama to play.

“We have played well but there are people that talk about the ACC play. Trying to find something to use against us. But we are here now.”

Joseph said this team wants to play its best four quarters of the season Monday.

“I wouldn't say we are chasing Alabama. We want to be the best Clemson we can. Obviously, and rightfully so, they have a little more respect as a more dominant team because they've done it for a while now. They've earned that. But we are just consumed with trying to be great and make Clemson its own brand and its own greatness.”