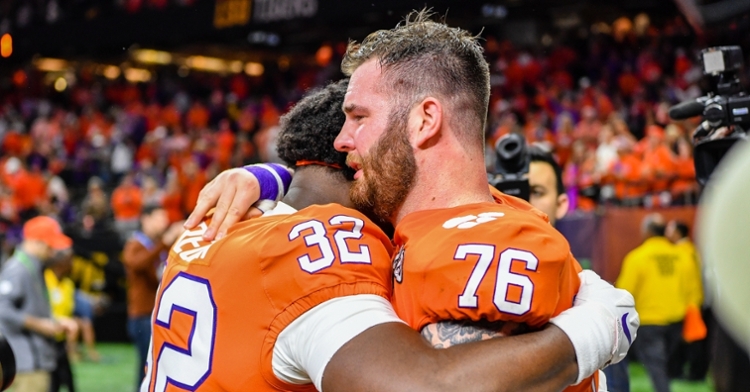 Sean Pollard shares his emotions after the loss to LSU

NEW ORLEANS, LA – The final game against LSU won’t define the careers of Clemson’s seniors, and the four years spent on campus will be remembered for more than just football. After all, life is more about the journey than it is the destination.

The four senior offensive linemen – Sean Pollard, Tremayne Anchrum, John Simpson, and Gage Cervenka – had their lockers in a line in the visiting locker room underneath the Superdome Monday night. Anchrum was hurting but had nothing but smiles for his teammates. Pollard stood in his locker, not wanting to change out of his uniform a final time. Cervenka sat wrapped in a towel, staring off into space. Simpson didn’t hide his emotions and sat with both hands covering his face as the tears began to roll.

I looked over at Pollard – a young man I’ve known since he was a junior in high school – and asked if he wanted to talk. If he didn’t, that was ok with me. There is a time and a place for everything, and interviews can wait. Instead of brushing me off, however, Pollard said it was ok to talk, and he began to put into words what he was feeling.

“I think it will take a little bit longer than a few days to get over this,” Pollard said. “It's easy to glorify God when you are at your peak, but when you're down low then God builds you up to be a better person. That is what I think is most important in this situation is to just glorify God - He puts those trials in front of everybody and I will see huge growth in myself, personally, and you will see huge growth from this team next year.”

Pollard said head coach Dabo Swinney had a simple message for his team after the loss.

“Win, lose, or draw, he will love us no matter what. He will do anything for the seniors,” Pollard said. “And then he told the younger guys that they have a responsibility to uphold the standards that we have here at Clemson. We play in the Playoffs and we play in championships and we win championships, and those are the standards that he has. He challenged them and told them they have six weeks before spring ball to get ready.”

Anchrum said his career and his life won’t be defined by one moment.

“I guess that is what is so great about the journey. We are not defined by a moment. Looking at the career and the journey we've been on is amazing,” Anchrum said. “We wouldn't trade it for the world. If you would have told me, in the beginning, the journey we would go on, I wouldn't have believed you. It means the world to be on this journey and have the experiences I've had with the people here.

“That is what attracted me to Clemson in the first place, is that they develop more than just the football player. They appeal to a lot of the different sides of life that other schools didn't offer. That is what has made this experience so special.”

Pollard said that while Clemson fans have high expectations for the program, they better be ready for another wild ride in 2020.

“It's very cliche, but the best is yet to come. That is Coach Swinney's motto and it's true,” Pollard said. “We just signed the number one recruiting class in the country, and if that doesn't prove his mantra then nothing does. We had 80 freshmen and sophomores on this team that grew up quickly. They have been in big games, they've experienced a lot of things and they aren't young anymore. That will be a big driving force for us next year. We won't be a young team next year, we will be an old team. Now they know how it is and what the expectations are.”