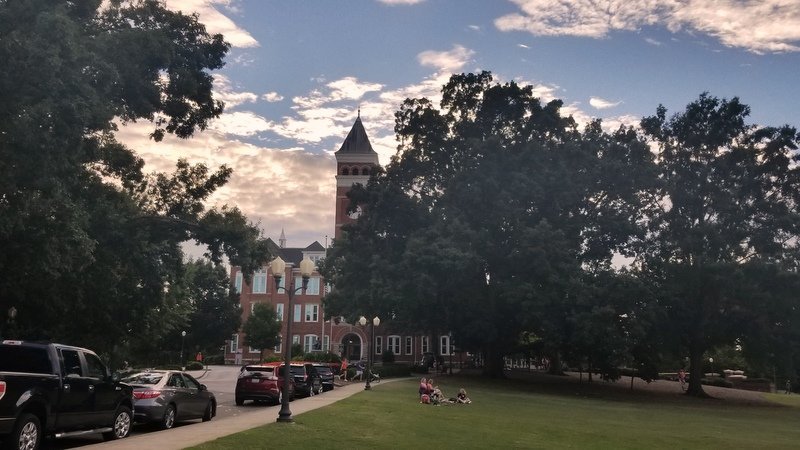 A ride and walk around campus last Friday provided several of those special moments that once again allow us to catch a glimpse of why this place is so special. It also made me realize that the more things change around campus, the more they stay the same.

Allow me, if you will, to steer away from sports and the game at Texas A&M this weekend. I like to think that part of my job is to tell the stories of what we see and hear, and a lot of times that gets lost in the noise of interviews and coach speak.

Former Clemson center Jay Guillermo and his fiancé Ava Bell (congrats guys!) wanted some help with engagement photos, so we drove over to campus to help out. Even as we drove in, I could tell it was one of those special evenings. Driving down Old Stone Church Rd., I caught that unique, sweet scent that you only find in the south – the smell of honeysuckle and late summer that we all love. That smell is also at its best on a dewy morning or in the evening just before dusk, and as we drove, I rolled down the window and took it all in.

We started in the Carillon Gardens and, as I frequently do, I got bored and began to wander. I walked across the street to Bowman Field and glimpsed fathers playing catch with their sons, students playing Frisbee with their dogs and impromptu games of touch football. It’s a scene that’s been carried out for decades on that field, and it was a gentle reminder that even though the view from across the street is changing, the people aren’t. 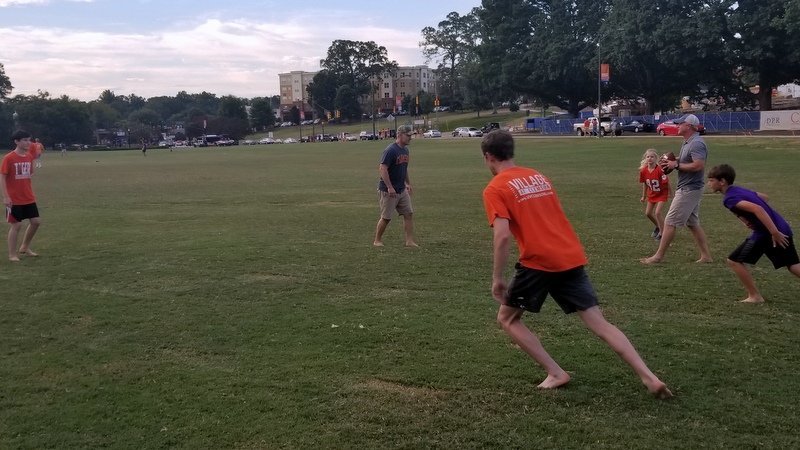 The people doing the actual work of the photo shoot (my boss’ wife and Nikki) rounded up the wayward, wandering child and proceeded to Memorial Stadium. The First Friday Parade had ended, and people were still wandering around that part of campus. The last rays of the sun were peeking over the West side of the stadium and adults and children alike were peeking through the gates of Death Valley, perhaps hoping to catch, in their mind’s eye, some future glimpse of thrilling games or their fall heroes.

Across the street at the entrance to the Scroll of Honor, at the same time, I caught a glimpse of America’s future and heroes that wear a different uniform. I spotted Major Trey Kennedy of the United States Marine Corps in his dress blues at a commissioning ceremony. Kennedy is a Clemson graduate who now screens and selects future Marine Corps officers in the upstate of South Carolina and western North Carolina. That includes Clemson University.

Kennedy spent two tours in Afghanistan (one in Kabul and one in Helman Province), and I can remember more than one game day when I would be on my way to the stadium when I would get a picture from Trey, standing in some far-flung outpost, proudly flying the Tiger Paw. It was, and is, a reminder of why we are able to spend our Saturdays watching our favorite football teams because people like him step into the breach for us. 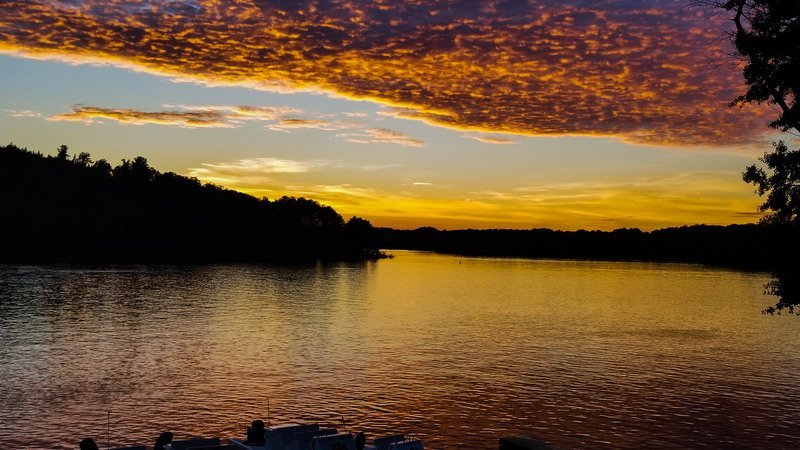 The sunset over Lake Hartwell was spectacular

I was introduced to another Clemson graduate who was recently commissioned in the Marine Corps. He is headed to Quantico for The Basic School and already has a slot reserved for aviation training. I stood back and watched the proceedings, once again in awe of these young men and women who are willing to serve. At that moment, Clemson’s military tradition echoed in my thoughts – the more things change, the more they stay the same.

The final stop was at Y Beach. Along the way, we gathered up two of our friends who made the trip down from Louisville to see the game, JT Bass and Ginger. JT is South Carolina born and raised but is a captain in the fire department for the City of Louisville. He flies his Clemson loyalty proudly in the face of all his Louisville Cardinal friends and co-workers (sometimes I worry for his safety) and enjoys the few moments he gets in Clemson.

JT also coaches football in Indiana and is using Major General Aubrey S. Newman’s “Follow Me” mantra as a way of leading his youth. Newman was born in Clemson, another beautiful connection.

The last rays of the setting sun filtered through the trees over Lake Hartwell, reflecting against a mackerel sky and turning everything into a subdued shade of orange. J.T., who hopes to retire closer to the beach, turned to Ginger and said, “I could get used to this. Maybe we should retire to Keowee.”

The more things change around, the more they stay the same.