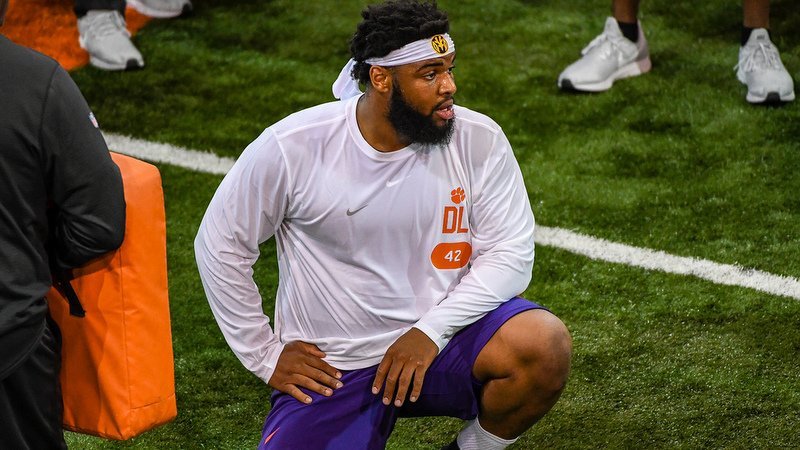 CLEMSON – Christian Wilkins still looks comfortable inside Clemson’s Poe Indoor Practice Facility, a place he’s called home for the past four seasons. He spent one last time competing on the turf last Thursday at the Tigers’ annual Pro Day and later said that he isn’t quite used to the fact he has to move on.

However, he takes comfort in the fact that he was part of a team that will go down as one of the best ever.

In his senior season, Wilkins produced 5.5 sacks and 14.0 tackles for loss. In total, he had 16.0 sacks and 40.5 tackles for loss in his career at Clemson. Now, he’s headed for the NFL and cherished the opportunity to compete with Dexter Lawrence, Austin Bryant, Clelin Ferrell, Albert Huggins, and Chris Register a final time.

Going through the draft process with the guys he thinks of as brothers makes the process easier.

“That’s been fun. It’s just been good to know that I can call one of them up and ask what it’s like for them,” Wilkins said. “We’re just grinding through the process and meeting with different teams and people. It’s just cool being able to see all these different things at the combine and again here at Pro Day. Just to work out with them and have fun with them; it’s been great.”

Wilkins won two National Championships and enough personal awards to fill a trophy room but now has to prove himself again.

“It’s a little different, but you have to start over no matter where you go,” Wilkins said. “I’ve been pretty good here, but it’s about what’s ahead and what it will be like going forward. You just have to be someone who can be consistent and dependable to be great at the next level.

“I feel like you always have something to prove every time you step out on the field. Just to prove your tape right, and the things that they say you can’t do – prove them wrong there.”