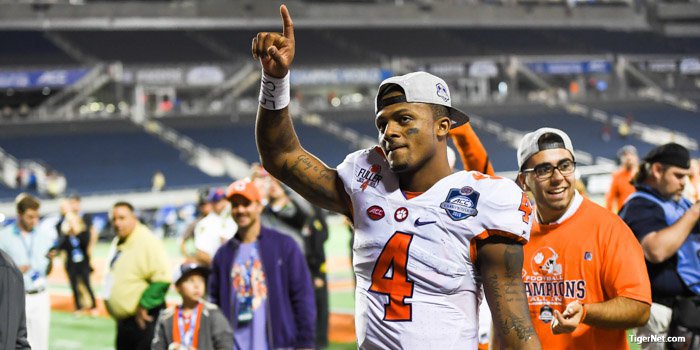 Watson completed 23-of-34 passes for 288 yards and three touchdowns.

ORLANDO, FL – Most college football fans will never get to experience the thrill of a joyous locker following a major victory, their only glimpse into those special moments are the ones caught on a video.

For the coaches and players, however, it’s one of life’s biggest moments.

Co-offensive coordinator Tony Elliott sat down in front of the media following Clemson’s 42-35 victory over Virginia Tech in the early hours of Sunday morning at Camping World Stadium, and he said those moments are what make coaching worthwhile.

“It’s comparable to one of the biggest moments in your life,” Elliott said. “Obviously, getting married and having a child are going to be some of the greatest highlights of your life, but seeing these young men work so hard and seeing what they put into it. They believe in the process and just to see the exhilaration in them and watch them dance and have fun, but at the same time, you see that they have a level of humility about themselves too.

“I feel extremely blessed to be a part of this program having played for Coach Swinney and to watch him build this program to where it is and be a part of that. It all goes back to the quality young men we have in that locker room. Coaching is important, but you gotta have playmakers. You have to have good, young men that want to buy into the program. It really hasn’t set in, but just excited for our guys and the way that they played. Now we have an opportunity to do something and say something in 28 years that hadn’t been done: back to back ACC Champs.”

The victory was the second consecutive ACC Championship for the Tigers, but Elliott said he wouldn't have time to process the feat until later in the week.

“I think it’ll sink in the next couple of days while I am out on the road recruiting. Right now, I am still in coaching mode,” he said. “There are some things that we could do better, and there are coaching points from this game, but really happy for our young men. The consistency is uncommon. If it were something that was common, then a lot of people would be doing it. To see these guys day in and day out work, stay humble, believe, face adversity, overcome adversity and be rewarded this way is just a tremendous blessing.”

Quarterback Deshaun Watson completed 23-of-34 passes for 288 yards and three touchdowns while adding 85 yards on 17 carries on the ground, and Elliott said the offense is at its best when Watson is running and throwing.

“Each team is going to have a different scheme to play us with. Sometimes they are going to give us the QB run and sometimes they are going to commit to overloading the box and not giving us the run,” Elliott said. “We know we are at our best when we can get #4 and #9 (Wayne Gallman) going. That sets up all the play actions and different things that we have in our system. In championship football we say that you best players have to play well in championship time. I think Deshaun has been the best QB and best player in the country. I definitely feel confident with the ball in his hand whether it is running or throwing.”

The offense was the beneficiary of pass interference calls on the Hokies, and Elliott said the coaching staff saw on film that they would have some one-on-one matchups.

“We knew that Coach (Bud) Foster was going to take some chances at playing man coverage and play press man to give us opportunities to have one-on-one matchups,” he said. “I think the ‘throwing it up’ was more of what Coach Foster was doing? He really dug deep into his old self and brought some blitzes that he hadn’t shown all year even on some of the games that we cross-referenced from last year. He did a really good job of putting pressure on us. When we had seven protectors, he had eight. When we had six, he had seven. He was finding a way to get somebody there, and Deshaun was just trying to make a play. It just worked out that some of those did end up as pass interference calls.”

The performance might have been enough to get Watson invited back to New York for next weekend’s Heisman Trophy ceremonies.

“We’ve been saying this ever since he stepped on campus. He’s an unbelievable talent football-wise mentally and physically,” Elliott said. “He never gets rattled in the big moments, and he plays his best when the game is on the line when there is the most pressure. I think if there is anything that warrants him for being in New York, then that’s what it is. He’s got the heart of a champion, embraces the opportunity. He wants the ball in his hands to take the last shot. He’s going to show up, and he has proven it time and time again. It Is a testament to who he is as a person and as a competitor. That’s why we believe he is the best player in the country.”